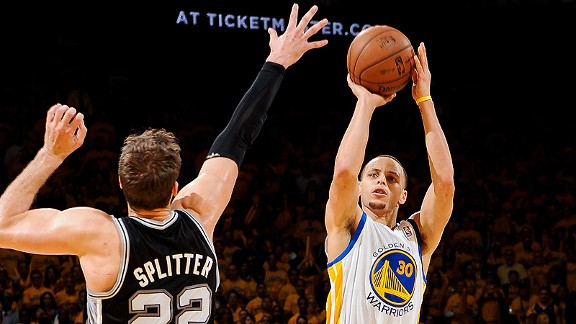 Children of NBA players, like Stephen Curry, do very well in today's NBA.

I recently watched "Doin' it in the Park," a love letter to New York City pickup ball in documentary form. The movie is enjoyable because its subjects wax charismatic on NYC's special brand of toughening. Zigzagging on gnarled black top makes you agile, accounting for crooked rims makes you resourceful, the threat of losing and sitting out hours makes you compete harder. Real New Yawk stuff.

It’s a compelling story. But lately, these conditions haven’t produced much in the way of NBA talent. It’s an open mystery why a town like Chicago churns out pro after pro while New York’s “Mecca” status ebbs towards distant memory.

The question on my mind is whether it's not just that city, but also "the park" that's falling behind.

A few of the league’s rising young players hail from a specific kind of background: They had a parent who played professional basketball. Kevin Love, Stephen Curry, Klay Thompson and Kyrie Irving all claim fathers who worked hard in passing their old vocation to the next generation.

The other common thread is that all these guys can shoot. In the case of Curry and Thompson, they might comprise the “greatest shooting backcourt in the history of the game." It’s no guarantee that NBA pedigree makes for a sweet jumper (Austin Rivers has certainly struggled), but it’s rare to see the second generation pro baller who flat can’t shoot. You wouldn’t want to leave Mike Dunleavy Jr., Wesley Matthews Jr., Jeffery Taylor, or even John Lucas III open behind the arc. Unfortunately for spacing-starved Memphis, you can let Terry Davis’ son Ed shoot.

Davis is also aberrational in that he’s a high-flying athlete. The NBA sons are a largely ground-bound lot, even if Stephen Curry was recently spotted reverse jamming. Setting aside my suspicion the Warriors hired a convincing Stephen stunt double, the lack of athleticism among second-gen players contradicts an easy “inherited” narrative, pervasive among League Pass announcers when they discuss these familially familiar talents. If it were as simple as “player receive genes,” one generation’s high leapers would raise the next generation’s high leapers.

Instead, junior is a highly skilled shooter, and such a skill can be helped along massively by one’s environment. Sure, Stephen Curry might have come out of the womb with father Dell’s jump shot. But you can also bet your life Dell Curry wouldn’t have just allowed his young son to keep shooting with, say, Rajon Rondo’s elbow-jutted form. NBA dads obviously have a facility with certain basketball abilities, often combined with the means and inclination make it manifest in their kids. They have access to great coaches, great camps, anything you need to turn your child into the optimal basketball robot.

Roughly one year ago, The New Yorker ran a story about a renowned “quarterback guru” and the thousands he charged for turning kids into promising prospects. Quarterbacking may never claim the high bar of entry that, say, becoming a concert violinist requires, but the article’s implication was that money goes a long way in determining a very specific kind of athletic success. The same rules could apply to the jump shot, merely one aspect of the NBA game -- but an increasingly essential one.

Much like swinging a golf club, a jump shot is a deceptively simple motion wherein a lot can go wrong. It follows that shooting skill is probably more easily developed when conditions are ideal (Read: Not in the parks of "Doin’ it in the Park.") It’s better to be in a gym, away from the wind and rain. It’s better to have an involved coach who subjects you to repetitive drills, correcting any mistakes. The guide hand, bent elbow, follow through -- these tend not to be intrinsic behaviors. Guidance begets the guide hand.

Ironic given his pedigree, the aforementioned Ed Davis was present for a dramatic demonstration on the importance of shooting in the modern NBA. His Grizzlies couldn’t shoot, so the Spurs squeezed off the paint until Memphis suffocated. Rule changes have led to a spread-out style, and teams are taking more 3-pointers than ever. Big men are less offensively involved than they used to be. A lack of perimeter shooting can make for a severe offensive disadvantage in a way it just didn't years ago. San Antonio’s sweep was the apotheosis of how spacing is dictating offense. The Grizzlies, rather than standing pat this offseason, giddily snapped up sweet-shooting Mike Miller after he was amnestied. It was a matter of survival.

So, if perimeter shooting is of growing importance in the NBA, there’s a decent chance it’s changing the league’s demographic landscape. The NBA, long known as an inner city beacon of hope, may draw an increasing number of players from the wealthier suburbs where parents spend thousands on obsessive basketball camps. If money talks, it can certainly tell you how to shoot better, in a sport that demands shooting. The park is a great place, but it’s not a given that it can reliably forge ever kind of NBA greatness.

This is mere supposition and could remain so for years given the small sample size we’re discussing and the vagaries of NBA player biographies (many basketball prospects move from school to school, searching for the best-fitting hoops program). I should also mention that a few current excellent shooters speak of humble city beginnings, most notably Kevin Durant. The NBA's just seen a surprising influx of dead-eye shooters born to former professional players. These players, many of whom had hoops in their backyards, year-round access to climate-controlled gyms and shooting coaches are looking at the park and lofting a jumper over it.