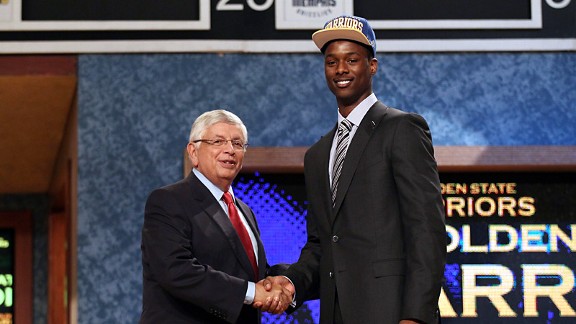 The purpose of the NBA draft is to promote parity by assigning the highest draft picks to the worst teams. The problem is that this creates incentives to tank -- teams may exert less effort to try to disguise themselves as being of low quality. In this piece we focus specifically on everyone’s favorite example of egregious losing, the 2011-12 Golden State Warriors.

The Warriors finished a once-promising season on a 5-22 freefall, giving them the seventh-worst record in the NBA. At 23-43, Golden State was just bad enough to avoid an outstanding trade obligation to send that June’s first-round draft pick to the Utah Jazz.

The terms of the trade created what we call a discontinuity in the Warriors’ payoff function: Additional losses at the end of the season could be the difference between Golden State getting a top-seven pick in a talent-filled NBA draft or coming away from the offseason empty-handed. The value of additional wins, on the other hand, was difficult to quantify and potentially small.

An oft-suggested method to eliminate this kind of discontinuity is to disallow the practice of including "protected" draft picks in trades. However, this could create a large amount of illiquidity and reduce the volume of trades. The fair value for some players happens to be a draft pick in the range of 8-14. Without pick protection these players become untradable to the detriment of everyone in the league.

A new kind of draft

We instead advocate overhauling the way draft picks are assigned. The rights to draft slots (the right to pick at a particular number) will be sold via sequential auction before the date of the draft for “credits.” Teams will bid with their credits and the highest bidder earns the right to make the pick come draft day. Credits will be allocated at the end of each season based on record with the worst teams receiving more. This preserves the original push for parity.

Under this system, teams trade credits rather than future protected draft picks. This eliminates the discontinuity that Golden State faced. One can no longer exert low effort as a way to avoid outstanding obligations. Another benefit is that teams could split up their credits in the manner they deem optimal. In certain drafts, having the first pick may not be a desirable outcome if there is no franchise player to be had. Having more credits may allow teams to spend on acquiring multiple draft slots or potentially save them for future seasons.

Of course, teams still may want to lose to get more credits, but the reduced certainty on the value of these credits shrinks the incentives to lose intentionally. A complex formula for awarding of credits, taking into account relative performance of all teams in a given year would add to this uncertainty without losing the redistributive benefit. For example, we could dock teams credits if their performance in the second half of the season is significantly worse (statistically) than their first-half effort.

A significant real world benefit of our suggestion is that the NBA could keep existing wage structures and the draft intact. The only change would be to replace a draft lottery with a month long market or auction. The day-to-day intrigue on who is bidding what for which pick would give fans of the less fortunate teams something to keep them engaged. Imagine the vibrant conversations of arm-chair GMs and auction-style fantasy league veterans debating the merits of each days bids.

Arup Sen is an economist at a Princeton based consulting group and holds a PhD in Economics from Boston University with a research focus on the NBA.

Timothy N. Bond is an Assistant Professor of Economics at the Krannert School of Management at Purdue University.