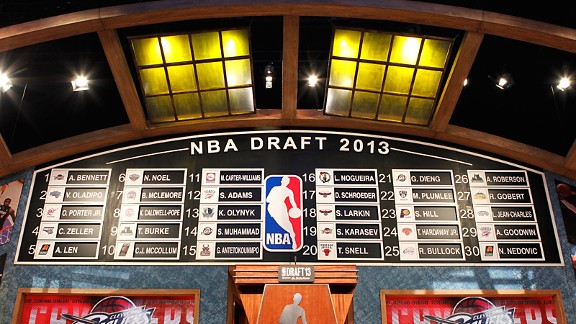 The NBA Draft might be the single most influential reason we see teams tank. Should we get rid of it?

There are essentially three ways a team can acquire the productive talent it needs to contend for a title:

This approach has also recently been used by the Boston Celtics and Los Angeles Lakers. The problem is that the NBA has a maximum salary. This means that teams cannot use higher wages to attract better talent. Instead, productive veterans are now considering whether or not your team is likely to win. In other words, the Miami Heat approach seems to require that you already have stars to attract more stars.

In addition, teams have to know which veterans to acquire. The New York Knicks have tried to build with veterans for years. But in most recent seasons, the Knicks have failed because they tend to acquire relatively unproductive veterans (primarily because the Knicks focus too much attention on per game scoring).

The Spurs approach: Acquire productive players in the latter part of the NBA draft

When we think of the Spurs, we tend to think Tim Duncan. Although Duncan was the most productive regular season performer for the Spurs in 2012-13, about 48 of the team’s regular season wins came from other players -- the five most productive were Kawhi Leonard, Danny Green, Tony Parker, Tiago Splitter, and Manu Ginobili. Each of them was either a non-lottery first round pick or a second-round pick. All teams have access to such players, but the team must be able to identify such talent. And since the Spurs are relatively unique in utilizing this approach, it’s reasonable to assume most teams cannot consistently identify productive players outside the lottery.

The third approach is to acquire productive talent in the NBA lottery. Most recently, the Thunder accomplished this when they built an NBA Finals team around the talents of Kevin Durant, James Harden and Russell Westbrook. Lottery picks are granted to the NBA’s non-playoff teams, so you have to lose to implement this strategy. You also must have a fair amount of luck. Not only does it help to finish very high in the lottery, you also have to be able to select the productive players with those high picks. In some years, though, this is difficult. For example, none of the top seven talents selected in 2010 have become players who produce wins in large quantities. A similar story can be told about most of the players at the top of the 2006 NBA draft.

There is another problem that the Thunder discovered. Initially draft picks play under a rookie contract, so these players can produce wins at a very low cost. But this contract expires fairly quickly. Specifically, the Thunder were able to employ Harden for only three seasons. Once a player moves on to his second contract, the team essentially moves to option No. 1 (i.e. building through productive veterans). So not only does this approach requires luck, it’s also a short-lived strategy.

Nevertheless, teams seem to try and follow the third option. And for that to happen, teams have to lose -- or pursue the strategy of tanking. Such a strategy essentially contradicts a fundamental promise made by sporting competitors; that the competitors will do their very best to win the game.

To eliminate this strategy, we simply need to remove the incentive behind this approach. Again, teams only get high lottery picks by losing. And the more you lose, the better your chance of getting the top picks in the draft. If we want teams to stop doing this, we need to change the incentives of the people who implement this strategy.

This can be done in three ways:

Return to a non-weighted lottery

In a paper I co-authored with Joe Price, Brian Soebbing, and Brad Humphreys, we presented evidence that the NBA’s non-weighted lottery -- utilized in the 1980s -- seemed to reduce the tendency to tank. Back in 1985, only seven teams didn’t make the playoffs. Today it is 14 teams. If all lottery picks were selected via a non-weighted lottery -- as was the case in 1985 -- the worst team in the NBA could receive just the 14th pick in the draft. This would effectively eliminate a team’s incentive to be as bad as possible to get the best pick possible.

A more radical approach (for North American sports fans) is to eliminate the draft. In European sports, there is no draft. But on this side of the Atlantic, it is taken for granted that the losers in professional sports leagues are rewarded with high draft picks. However, as we have noted, this gives teams an incentive to tank. So a simple solution is to abolish the draft and allow top amateurs to negotiate with more than one team.

This system would force the non-playoff teams to be as competitive as possible, since the top amateurs would probably prefer to play for the best non-playoff team possible. And again, would eliminate the problem of the tanking.

The tanking strategy is easy for decision-makers in the NBA to embrace. Teams that pursue this strategy are essentially trying to lose to enhance the team’s draft position. This is a simple strategy to follow. Trying to win is difficult, but losing is easy and the more incompetent the decision-maker, the better the strategy can be implemented. Imagine how easy it would be to do your job if you were rewarded for doing the job badly!

To stop this behavior, the NBA could simply implement a rule that says if a team misses the playoffs for three consecutive seasons, the team must fire its general manager. If this rule was put in place, constant losing would lead to consequences for executives.

David Berri is a Professor of Economics at Southern Utah University. He is co-author of The Wages of Wins and Stumbling on Wins (FT Press, March-2010). He has written extensively on the topic of sports economics for academic journals, and his work has appeared at The New York Times, the Huffington Post, Freakonomics.com and Time.com.