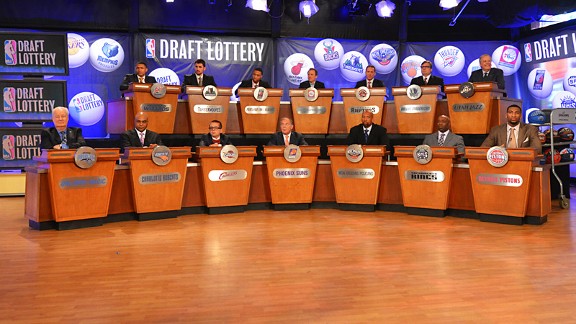 The draft lottery has its charm, but sports economists say it fails to make bad teams good.

It's a wonderful time for the NBA, with young stars all over the league, an impressive collection of contenders and fascinating storylines from coast to coast. The one real downer, however, is that the game-changing talent of the 2014 draft is expected to inspire any number of teams to lose as many games as possible this season, in the name of the best possible draft pick. In this Tank Week series, ESPN.com's HoopIdea explores tanking and its effect on the NBA.

At its heart, tanking in the NBA is an issue of messed up incentives -- the league wants success but rewards failure.

Lose 65 games and you have the inside track to the best young talent at the cheapest prices. Scrap your way to 40 wins when conventional wisdom picked you in the basement and your consolation prize is a middling first-round pick.

Maddening though these contradictions may be to fans, they are especially galling to those who study incentives for a living: economists. It's almost impossible to find one who likes the NBA's current system, which was built in the name of competitive balance but has hardly been shown to deliver anything like it in any sports league in the world.

The idea is that high picks make bad teams better, but as economist Brad Humphreys explains, there’s a body of research that has found, despite popular perception, that “drafts, salary caps and revenue sharing do not have any appreciable impact on competitive balance.”

HoopIdea's motto: "Basketball is the best game ever. Now let’s make it better." In that spirit, we asked a collection of economists to tell us how things could be better. Over the rest of this week we'll be rolling out proposals to fix tanking from the likes of Joe Price, David Berri, Humphreys, Justin Trogdon, Brian Soebbing, Arup Sen and Timothy Bond.

None defends the current system, which research shows absolutely does lead to tanking. Their proposals are fascinating: