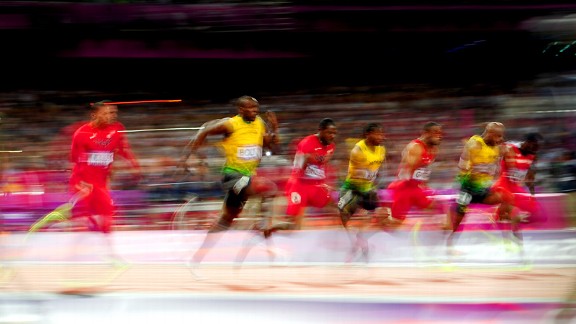 Competitors doing everything they can to win make sports great.

It's a wonderful time for the NBA, with young stars all over the league, an impressive collection of contenders and fascinating storylines from coast to coast. The one real downer, however, is that the game-changing talent of the 2014 draft is expected to inspire any number of teams to lose as many games as possible this season, in the name of the best possible draft pick. In the first post of a series, ESPN.com's HoopIdea explores tanking and its effect on the NBA.

Here’s a nice HD YouTube video, cued up to the moment when the world’s finest sprinters are lining up for a big race.

Eight of the best athletes the world has ever known, shaking muscles loose and then crouching into the starting blocks, poised to explode. They spend years getting to this level -- running fast defines these competitors. Yet they do their best at it only a few seconds a year.

This is that time.

It's fun to watch, even though the commentary is in German and it's a sport hurting for both celebrity power and highlight-worthy artistry. In fact, it's surely the simplest sport: It starts here and ends right over there. No turning. Not even really any pacing. Eight athletes in a row, each bound and determined to run faster.

We appreciate this on a deep level. "Wanna race?" is an ancient question almost every human has asked or answered. This trips a trigger. The rare delight of sports, in these complicated times, is to see eight crystal-clear agendas, so nakedly, completely and devotedly all in.

That’s competition, and that's part of us.

Screwing up a beautiful thing

Now imagine this. You’re the runner in Lane 4, hands placed carefully, heart racing, waiting for the starter. Three sprinting wizards to your left, four to your right. Everyone has had this date circled on the calendar all year. You’ve got glory to earn and a family to feed.

And you know there’s:

Takes a lot of the fun out of the race, doesn't it? Knowing the competition’s big prizes are not just for winning, but for winning or losing.

Of course, that's not what happens in track. But, oddly, it is roughly what really happens in the NBA.

This season, one NBA team will work incredibly hard, make one smart decision after another, please the basketball gods and enjoy an NBA title in June.

Another team will turn the ball over a ton, play the wrong players and endure heart-wrenching injuries as the basketball gods look the other way. That team will trick the rulebook into an incredibly high pick in the draft of a lifetime with a good shot at a player who will change things for that team for a decade or more.

It's tough to say which team wins the bigger prize.

In other words: Every team would do its darnedest to give fans what they want -- real long-term strategy and real all-in nightly competition -- if the league would take its thumb off the scale. Thirty general managers are hard-wired to pull their hair out to win now and forever just like those sprinters -- if only the NBA didn't muck things up by giving a whole lot of those competitive people strong arguments to cut their competitive juices with the tonic water of tanking.

It's not that the league is forcing teams to lose. And rest assured we still get amazing competition. But the NBA is needlessly confusing things. You know what exits stage left when the priorities get cloudy? The beauty of clear priorities.

Give the big prize to the runner in last place, and it's just too much to expect everyone's best race after race, year after year. The race gets a little less fun to watch.

Maybe it’s not the biggest deal in the world. Maybe the sport can thrive despite this -- clearly it has.

And let's be clear: What I'm not alleging is that coaches or players are throwing games. I'm not even chapped at the owners or GMs who pursue losses by deciding to cut costs, keep bad coaches around, trump up injuries, trade away efficient players, play inferior players or save cap space for another day. They all should do what they think is in the long-term best interests of their teams -- I can't really call the Spurs idiots for the pathetic show they put on to get the draft pick that became Tim Duncan. Everyone should pursue wins, and more or less I believe everyone does. This isn't an ethical issue.

What's messed up is that the league has confused matters. When this season is over and teams like the 76ers, Suns, Kings, Magic, Bobcats, Celtics and Jazz have miserable records, did we learn those teams are dumb, or smart?

You want to see the most intense competition? You want every game to matter? You want maximum excitement? Well, duh. Stop rewarding failure. Stop creating the problem.

It casts a shadow over the NBA schedule. Maybe a third of the games feature at least one team that no doubt has players and coaches who are dying to win, but who have been intentionally handicapped by front offices that value losses. I don’t know who’ll win that Grizzlies versus Sixers contest, but I know the Grizzlies -- all of them, from the point guard to the president -- want to.

Meanwhile, we could, quite simply, with a wave of the hand from the NBA Board of Governors, have a league where all 1,230 games feature two organizations with all the naked competitive ambition of the sprinters in that video.

Why can’t we have that?