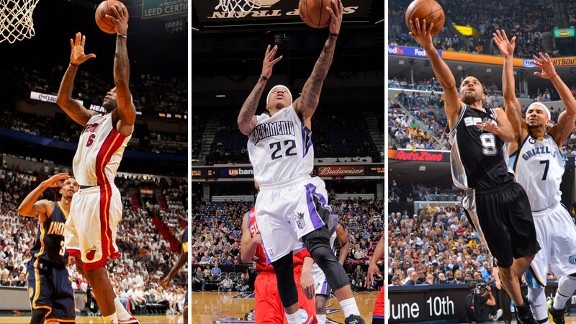 Statistics show LeBron James, Isaiah Thomas and Tony Parker are among the best.

Is being good at the layup as simple as getting to the rim? There’s rarely a distinction made between a player’s ability to get in layup range versus his ability to actually sink it. Perhaps that’s because “a layup” is also a metaphor for something easy, like a “gimme” putt in golf.

The layup also gets no respect because it doesn’t demand respect. Unlike the dunk, the layup fails to seize an arena’s attention with a sudden lightning bolt at the hoop. Instead, it takes an indirect route off the backboard before meandering along the rim, waffling on whether to finally be a basket already.

Incredible dunks look super intentional, as though a player’s life depended on forcing the ball through the rim at that moment. Incredible layups look accidental, as though a fouled Dwyane Wade thought “Why not?” while flinging the ball in the backboard’s general direction.

So the layup commutes between “you’re open and should always make it” and “you weren’t looking at the rim, that was total luck.” It’s hard to get recognition for being good at something when both the routine and the spectacular are so easily dismissed.

Well, no one is dismissing the mighty layup in these parts. The shortest bank shot is indeed a skill -- and an important one. Here are some players who, according to Basketball-Reference.com, have mastered the ancient art, along with some guys who could stand to do better.

Made 70 percent of layups, attempted 357

When LeBron stole Game 1 from Indiana with an off-hand layup, there was far less marveling at his steely reserve than there was criticism of Frank Vogel for letting it happen.

An open layup is a high percentage shot for anyone, but it says something that LeBron is comfortable with his off hand in a high-pressure moment like that. His ambidexterity is the foundation of his short-range arsenal.

Not only is LeBron better at getting to the rim than everyone else but he might be more accurate once there than everyone else, as well. Last season, LeBron shot 70 percent on layups. He attempted at least 200 layups more than anyone with a better layup conversion rate.

The aforementioned ambidexterity allows LeBron to explore any angle at any time. A favorite tactic of his is to shield the defender with his back while banking a no-look lefty. It’s a bit like a reverse lay-in that doesn’t finish on the other side of the hoop.

Made 67 percent of layups, attempted 151

Pound-for-pound (Copyright: Allen Iverson) the best layupper around. At a tiny 5-9 in socks, Thomas shouldn’t be able to hit 67.1 percent on these shots. He has had a lifetime of practice against taller players, though.

Thomas hasn’t mastered any one thing in particular. He just has the full layup repertoire. He’ll switch hands when it suits him. He’ll loft it high off the glass like Steve Nash. He’ll shield off contact with his back while scooping the ball forward. He has the up-and-under down.

Made 67 percent of layups, attempted 331

This is the defining Parker trait and always has been. There’s also a striking quirk to his game. Although Parker can use his left hand if the situation requires, he prefers to use his right, even on the left side of the backboard. I’d say the signature Tony layup is a right-handed scoop on the left side of the rim. That is, if the signature Tony layup isn’t an overhand try in which he’s leaning backward on an invisible recliner.

Made 70 percent of layups, attempted 156

Look, I’d be lying if I said I could fully explain Thornton’s layup skill, but he’s been great two years running (69.3 percent on layups last season). He isn’t especially fluid with his moves, but he’s good with either hand. Thornton also doesn’t force anything around the rim. Most of his lay-ins come off assists.

Made 50 percent of layups, attempted 281

Kevin Costner’s “back, and to the left” line creeps into my head whenever Jennings drives. Detroit’s new starting point guard has a tendency to lean backward off balance while flinging lefty prayers. Hopefully Jennings learned something from former teammate Beno Udrih, who shoots contested layups quite well.

Made 50 percent of layups, attempted 335

He’s even worse at contested layups when you consider how often he’s rebounding his misses for easy putbacks. But those putbacks might answer the question of why Anthony is so mediocre near the basket. Melo loves chasing his own shot, and the first try might be a careless prelude to the chase. He’s also not especially adept at using his left hand and thus forces a lot of action with his right.

Made 50 percent of layups, attempted 245

He’s the right-handed Jennings, although there’s more hope for Waiters going forward, I’d say. He’s stronger than Jennings (eventually my “Strongta Ellis” nickname will get off the ground, I just know it), taller than Jennings and younger than Jennings. I’m banking (OK, I’ll stop) on an improved Waiters near the rim.

Made 49 percent of layups, attempted 290

Sessions was among the worst perimeter player on layups last season, but he hasn’t been this bad in the past. Last season could be a fluke -- or the result of a once-quick point guard slowing down. I’ve noticed he tends to go right when the path is blocked off.

Made 48 percent of layups, attempted 145

I stayed away from listing big men because so many of their “layups” are really post moves or strained putbacks, but Asik deserves a mention. He converted 94.6 percent of his dunks, nearly 47 better than he managed on layups. From 3-10 feet, he shot 27.4 percent.

Few players better demonstrate the difference between grip and other kinds of fine motor skills. Asik is good at dunking; he has no issue putting his clamps on the rock and tomahawking it through the hoop. Once his hands try a more delicate layup, though, the ball flies off the window as if Asik’s playing handball.

Made 45 percent of layups, attempted 164

I don’t want to judge too harshly, as Rubio was coming back from an ACL tear. This is his second season of poor finishing, though (48.4 percent on layups in his rookie year). It’s curious that Rubio struggles like this because he’s so well coordinated and so well aware of angles when it comes to passing. Perhaps the problem is his running balance. On drives, Rubio often staggers as if he’s in an invisible potato sack race.

Made 58 percent of layups, attempted 478

Westbrook might be the player whose facility at making layups simply means he gets to the rim a bunch. That’s not entirely fair, though, because Westbrook can and does finish with either hand.

You just wouldn’t expect the dynamic point guard to be a whole 12 percent worse on layups than LeBron, given Westbrook’s elite speed and hops. It appears, from the video clips, as if Westbrook flies into the lane with more desire than strategy, willing the ball toward what might be the hoop. That’s nitpicking because, even if Westbrook is only OK at converting layup attempts, it matters more that he is creating so many of them.