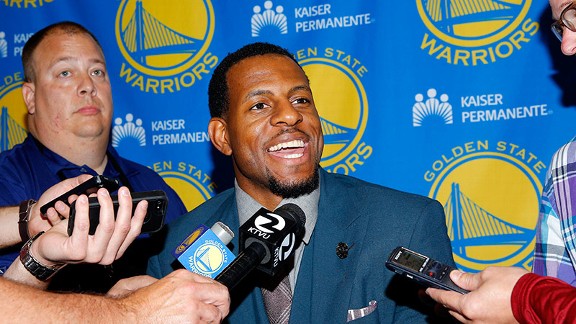 Andre Iguodala is going gray. That’s the first thing I noticed at the Warriors practice facility in downtown Oakland on Wednesday. Breaking news, you heard it here first. Slightly famous athlete suffers from apoptosis of the follicle. It’s just that the white hairs are a bit shocking on a guy whose physique looks like Batman’s armor.

I’m casting science aside and blaming the Philadelphia media for Iguodala’s premature “Just for Men” status. “Iggy” (Iguodala hates that media-given nickname, by the way) mastered the subtle art of defense while the local sports pundits not so subtly bellowed that he wasn’t worth the contract. Philly’s a famously angry market, and from what I could tell, its fixation was more on what Iguodala couldn’t do rather than what he could.

Then the Sixers traded him to Denver for the concept of Andrew Bynum. Despite losing Arron Afflalo in the deal, the Nuggets went from a 47-win lockout pace to a franchise record 57 wins. The Sixers trudged to the lottery, trampling Doug Collins’ soul in the process.

So where was the widespread credit? Even if George Karl had kept his job, I doubt the public would have embraced Iguodala’s defensive impact as a storyline.

We don’t care about defense. It’s about creating the absence of something, which sounds more like preventative maintenance than the action fans crave from sports. Tune in folks, watch Iguodala perform the NBA equivalent of sealing a wood deck.

A lot goes into Iguodala tilting the odds against action, but it will be ignored for the most part. His defense is as public as it is obscure. Maybe that’s why he sounds a bit annoyed when discussing his game and how it’s regarded. Iguodala is quite literally soft-spoken, but he seemed downright brash on Wednesday on the topic of his D and its impact (bolded emphasis mine).

You think you have another level you can go to individually?

Yeah, definitely. I don’t think I’ve gotten enough credit for what I bring to certain teams, especially last year with the record we had, breaking the franchise record for wins and how we kind of kept everything together and pulled off a great season.

How much credit do you deserve for the defensive leap that Denver took last season?

I would say I had a lot to do with it, because I had a lot of responsibility, especially in the pick-and-roll coverage on the weak side and having to guard two guys, the diver and the 3-point shooter. Which is ... it’s damned near impossible. I see a lot of teams lose games off that.

This could be the season that Mr. "Damned Near Impossible" finds his recognition. He joins a team whose fanbase has long pleaded for better defense. The last season in which Golden State was better than 10th in defensive efficiency happened 35 years ago.

Good defense is damned near impossible to notice. Unless it’s a total change of pace from what you’re used to. Warriors fans were beside themselves over the flashes of defensive might bequeathed by Andrew Bogut, Klay Thompson and Harrison Barnes. If Iguodala vaults this unit to an elite level, Oracle Arena might levitate.

For now, Memphis has the market cornered on fan-friendly defense with their “Grit n’ Grind” branding, energetic crowd, and charismatic spokesman in Tony Allen. Iguodala could be GSW’s Allen -- a reason and symbol for a popular team’s cultural shift. In his 10th season, the often dismissed and maligned Iguodala could finally get his due.

Oh, who am I kidding? If the Warriors go deep in the playoffs we’re going to focus on Steph Curry’s 3-point shooting and little else.