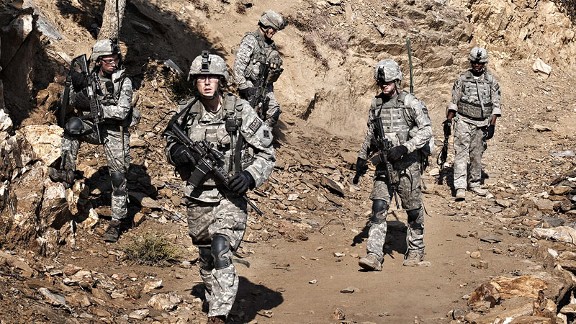 What can NBA teams learn about motivation from soldiers on the front lines in Afghanistan?

Coaching, generally, is a multibillion-dollar global business. NBA coaching accounts for something like $120 million of that -- that's roughly how much the 30 teams' coaching staffs make together.

The key skill: inspiring the most accomplished individuals in the game to do what's best for the team, and to do it hard, consistently and professionally, as many nights a season as possible, through injury, exhaustion, politics and constant disappointment.

One of the NBA's mysteries: How do you motivate young men to be, essentially, good soldiers?

Asked literally, that's a question that wins wars and thus has been researched for millennia. And to the extent war has answers, they are surprising. And both delightfully clear and applicable to sports.

Journalist Sebastian Junger spent 15 months on the ground with soldiers in just about the toughest part of Afghanistan, the Korengal Valley, with some of America's most battle-hardened infantrymen. Even then and there, despite all the clear differences between sports and war, Junger writes in his book "War," the task is one of teamwork:

Stripped to its essence, combat is a series of quick decisions and rather precise actions carried out in concert with ten or twelve other men. In that sense it's much more like football than, say, like a gang fight. The unit that choreographs their actions best usually wins. They might take casualties, but they win.

That choreography -- you lay down fire while I run forward, then I cover you while you move your team up -- is so powerful that it can overcome enormous tactical deficits. There is choreography for storming Omaha Beach, for taking out a pillbox bunker, and for surviving an L-shaped ambush at night on the Gitigal.

The message: For success, cohesion is necessary, just as in sports. But somehow what works best to motivate soldiers remains underappreciated in sports.

To show what I mean, and assuming you can handle a few pointed curse words as well as vivid talk of violence, I can't recommend strongly enough that you watch this excerpt of the Oscar-nominated 2010 documentary "Restrepo," from Junger and now-deceased photographer Tim Hetherington. This clip, detailing the episode that later led to the first Medal of Honor given to a living soldier in four decades, drops some powerful clues about what really inspires performance under pressure.

Staff Sgt. Salvatore Giunta and his brothers in Battle Company spend their days not just focused on the group task, but risking their lives for each other in the toughest conditions. Every hour contains heroism, of a kind: Battle Company, Junger reports, "is taking the most contact of the battalion, and the battalion is taking the most contact -- by far -- of any in the U.S. military. Nearly a fifth of the combat experienced by the 70,000 NATO troops in Afghanistan is being fought by the 150 men of Battle Company."

Not to mention, the parts of the job that aren't violent are hardly delightful: searing heat and brutal cold; days of carrying heavy packs, slathered in body armor, lugging heavy weapons; weeks without warm running water; intermittent electricity at best; scorpions; no real rest and relaxation in the country at all; and anti-malarials that give you crazy dreams. The urinal is a PVC pipe stuck in the ground.

What keeps them going? From afar, people talk about things like patriotism, duty, religion, honor, the mission and the flag. But the more people have dug into it, and the more you listen to the words coming out of the mouths of people who live it, like Giunta, the more those things take a back seat.

Lots of things have the potential to make people brave.

But what's the main thing?

Love. Not so much for families back home, but for fellow soldiers.

Junger cites 49 research papers from the last 50 years in the section of his book called "Love," and he affirms the researchers' findings in anecdotes from World War II, Vietnam, Afghanistan and beyond. He summarizes:

The army might screw you and your girlfriend might dump you and the enemy might kill you, but the shared commitment to safeguard one another's lives is unnegotiable and only deepens with time. The willingness to die for another person is a form of love that even religions fail to inspire, and the experience of it changes a person profoundly. What the Army sociologists, with their clipboards and their questions and their endless meta-analyses, slowly came to understand was that courage was love. In war, neither could exist without the other, and that in a way they were just different ways of saying the same thing. ...

The platoon was the faith, a greater cause that, if you focused on it entirely, made your fears go away. It was an anesthetic that left you aware of what was happening but strangely fatalistic about the outcome. As a soldier, the thing you were most scared of was failing your brothers when they needed you, and compared to that, dying was easy. Dying was over with. Cowardice lingered forever.

Heroism is hard to study in soldiers because they invariably claim that they acted like any good soldier would have. Among other things, heroism is a negation of the self -- you're prepared to lose your own life for the sake of others -- so in that sense, talking about how brave you were may be psychologically contradictory. (Try telling a mother she was brave to run into traffic to save her kid.) Civilians understand soldiers to have a kind of baseline duty, and that everything above that is considered "bravery." Soldiers see it the other way around: either you're doing your duty or you're a coward.

In the NBA, motivation has long been seen as a personal thing -- Bill Walton once told me he couldn't care less if his teammates are motivated by a big contract, a title, or the pretty girl in the front row.

Coaches push all those buttons and more.

But the news from the front lines is that of all the motivations, love for teammates is the special one. That's the river that runs deepest. Powered by big hearts and brains evidently wired to work a certain selfless way, people will actually, amazingly, fall on grenades to save each other, and that kind of thinking underlies the most effective teams. Under duress, humans are capable of the most incredible bravery and selflessness -- so long as their hearts are full of love.