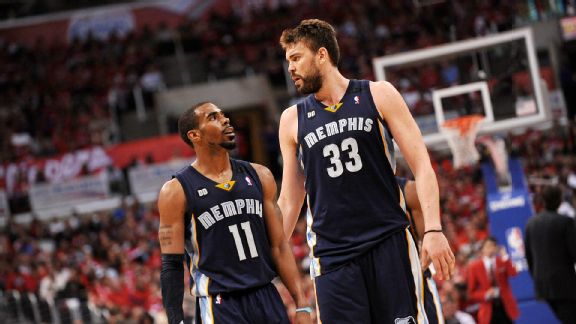 The Grizzlies' defense is all-world, but can Mike Conley and Marc Gasol add some flow to the grit?

In a league where most teams are smaller and stretchier than they were 10 years ago, the Memphis Grizzlies remain delightfully Jurassic: a point guard, two prototypical wings, a power forward who lives on the low right block and a center who protects the rim and can work in the pivot. On the whole, they’re solid man-to-man defenders who can run a quality scheme that makes life difficult for the other guys.

These characteristics have been branded as "Grit 'n' Grind" basketball, produced by the Memphis Grizzlies. But Grit 'n' Grind is more a battle cry than a series of principles. As a team persona, it’s a gem, for both the guys inside the locker room and the fan base. Mood and spirit are important factors for a basketball team, and the Grizzlies rate well in those categories. Still, there’s a sense inside the team that even more can be sculpted from what’s a solid foundation.

The coaching staff and management group are populated by maniacal perfectionists. They understand that the roster composition is far from perfect, and that advancing to the conference finals, where the Griz bowed out in May, will be a tough bar to clear. But they also believe the offense still hasn’t cracked the code. Even if 2013-14 turns out to be a consolidation season in which the team jells around Mike Conley and Marc Gasol as the front office continues to fine-tune the spreadsheet, a bit less grind and a little more flow is necessary.

And around the NBA, there’s a sense that the Grizzlies aren’t a pleasant team to face, but still caught a break last spring when they drew the Oklahoma City Thunder sans Russell Westbrook in the conference semis and won the series handily. Nobody begrudges the achievement -- the Grizzlies are generally well-liked and respected around the league (except possibly by the Clippers) -- but they don’t exactly honor it, either. The Grizzlies will have to prove themselves in the long haul before they’re known as more than the mystery guest in the Western Conference.

The Grizzlies are confident they can develop this larger belief system that can elevate their offense from a series of ad hoc sets to one that’s guided by a system. We saw glimpses of it on crucial possessions during the postseason -- pick-and-post exhibitions by Gasol and Conley, Zach Randolph moving in the half court to create passing lanes for Conley and Gasol to find him, crisp reversals out of the post that ultimately find Quincy Pondexter in the corner. For a few glorious weeks last spring, the Grizzlies sensed they’d grown from offensively proficient to almost fluent.

Whether they can establish this kind of flow during an eight-month period likely will determine whether they’re playing for a trip to the NBA Finals again next spring. Gleaning meaningful information from preseason basketball is the equivalent of gauging the potential for a lifelong commitment from a 30-minute coffee date. But so far, the Grizzlies have pursued a few new objectives.

First, they are determined to get into their stuff more quickly this season, something the coaching staff is drilling into the team. Virtually the entire league pays lip service to this idea, but the Grizzlies need to execute this strategy as a means to improve. They still lack for outside shooting, which means they don’t force many defensive rotations, and finding opportunities in the half court is often a slog. The Grizzlies will never be a high-octane, top-10 pace squad, but they have enough skills guys -- particularly in Gasol -- to Spur-ify their offensive game plan even if they remain oriented toward the inside.

Get going. This means Conley shouldn’t be walking up while the rest of the unit stands stationary in a Horns formation, bigs at the elbows, wings in the corner while he pounds away. It means immediately getting the ball into Gasol at the elbow, where he can precipitate the action and force the defense to think. And executing handoffs to a teammate on the move or making quick passes to a cutter.

The patented Tony Allen baseline dive should be part of a much bigger collection of sets designed around cuts, with plays designed to create space for that motion. Meanwhile, Gasol is the best playmaking big man in the game (arguments for Joakim Noah are accepted); he can find a passing lane in the dark. Entry passes from the wing to the post need to happen sooner. Every possession should manufacture at least one look before the shot clock hits :12.

The Grizzlies might not have the shooters to fan out to the corners for quick-hitters, but Memphis does have big men who know how to capitalize on early touches down low. Post defenses are at their weakest in transition, and on the secondary break and with more teams looking to the arc on the break, the post is often open early. Gasol can zip up the floor and act decisively to maintain the quick tempo. Randolph isn’t good for more than a couple of rim runs a night, but he can work as an effective trailing big who rumbles his way down to the block in the open court -- not an easy thing for a defender to slow while pedaling back.

Shooters are the easiest way to create room in the half court, but playmakers can achieve the same ends if they’re working with capable finishers and a smart blueprint. Gasol’s skill set has been sufficiently documented, and Conley’s instincts have sharpened. The Grizzlies’ best raw playmaker could be rookie Nick Calathes, who has excelled in Greece and Russia the past four seasons. The big point guard has opened eyes with his court vision and passing skills at Grizzlies training camp. Back in 2009, Calathes clocked in at No. 6 overall in John Hollinger’s Draft Rater, whose predictive powers have been solid. Calathes is only 24, and he might be the guy to solve the Grizzlies’ longtime backup point guard issue.

The Grizzlies will double-down on Gasol and Conley this season, both as playmakers and scorers. The ball will reside in their hands, and the days of the pair combining for a usage rate of 40 percent (which would be league average for two players) are over. Gasol and Conley will have to manage their share of problem-solving tasks, but they’ll have a lot of help on the bench and, more important, have grown to trust each other like a true big-small tandem. The quiet acquisition of Kosta Koufos gives the Grizzlies the deepest frontcourt in the league, with a nice combination of high and low, experience and youth, traditional post grinders and face-up threats.

In a glitzier market, the swirling storylines and high expectations in Memphis would generate huge Internet traffic, but the Grizzlies barely nibble around the edges of our attention. In the past year, Memphis has seen a turnover in ownership and top management. The team’s highest-paid player was shipped out, and a coach who won 56 games was replaced. All of the upheaval has been in pursuit of a fresh approach to govern decision-making. Memphis may never attract LeBron James and big-name CAA clients in free agency, but for many players, factors such as market size and nightlife are less important than they used to be, measured against general quality of life (which in many cases includes average temperature) and workplace compatibility.

Like Oklahoma City, Memphis could become a place where an appealing team prospers under the guidance of new ideas -- and ultimately becomes a place where guys want to play.