As we watch this year's loaded 3-point contest, you might be wondering: Are today's 3-point shooters better than ever?

The NBA has evolved so drastically over the years that it makes raw 3-point percentages super difficult to compare across eras. Case in point: Larry Bird, who many consider one of the best shooters ever, doesn't even crack the top 100 in career 3-point percentage.

Comparing Bird's numbers to, say, Stephen Curry's feels like apples to oranges because Bird faced different defenses, different rules, different bodies and different philosophies than Curry. Those are important factors that muddy up the picture.

What we really need is an experiment that holds all those variables the same. Just Bird, Curry, a 3-point line and a basket.

Funny thing: We already have that, and it's called the 3-point contest. Every year, the best shooters undergo the same controlled environment on All-Star Saturday and try their best to hit every shot.

So we decided to break down the film of every 3-point contest since 1987 -- thanks to ESPN researcher extraordinaire Gus Elvin -- and cataloged over 8,000 shots to see if today's shooters are indeed better than yesterday's. (One note: We couldn't get our hands on the full reel of the inaugural 3-point contest in 1986, but we did crunch everything after that.)

What we found is that, yes, the best of the best have gotten better over time. Much better, in fact.

Back in 1987, Bird took home the second trophy of his 3-point three-peat, toppling a crew of Byron Scott, Craig Hodges, Dale Ellis, Danny Ainge, Detlef Schrempf, Kiki Vandeweghe and Michael Cooper. Collectively, they made 46 percent of their 3-point tries.

Fast forward to last year's contest at Barclays Center. With Curry leading the way, the 2015 contestants made a whopping 58.6 percent of their attempts. A huge difference.

And that's not an outlier hot performance. Over the past three decades, the best shooters have, on average, steadily gotten sharper in the contest over time. 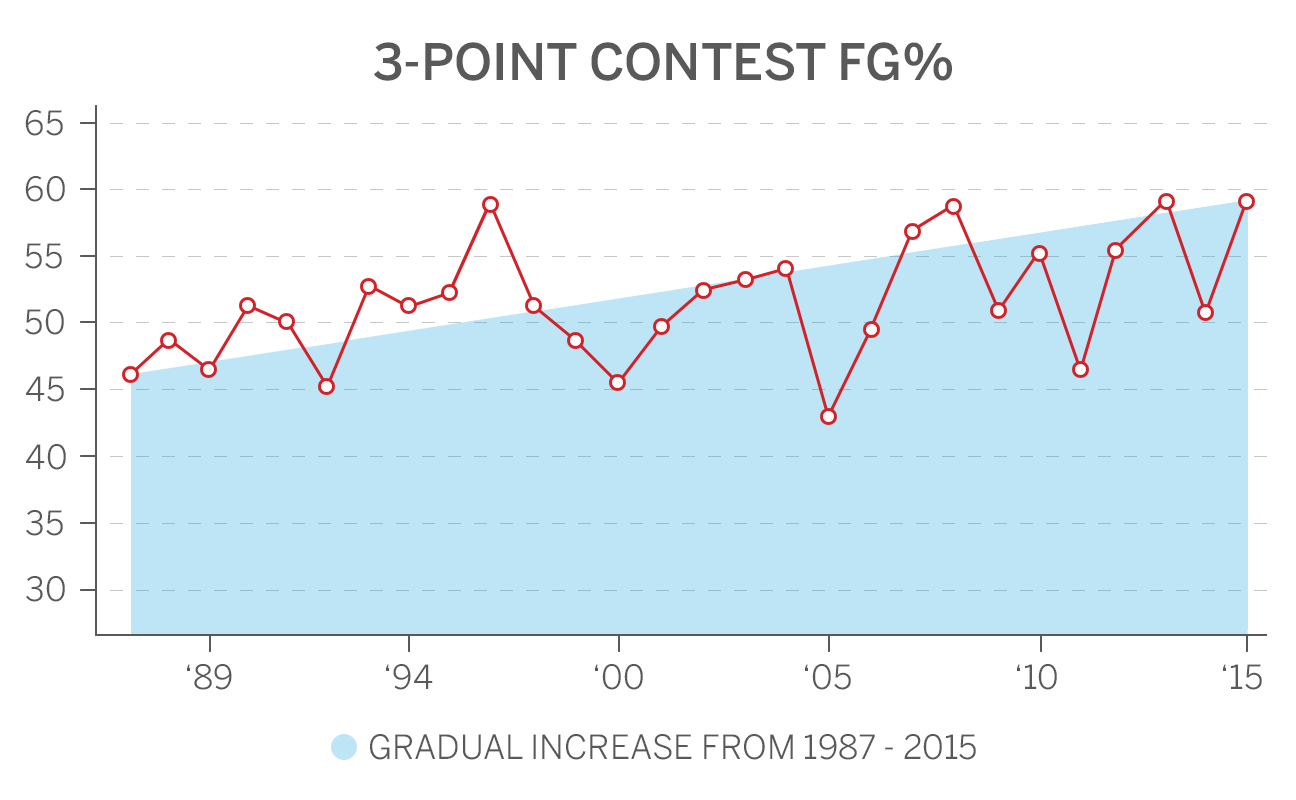 A few things to point out in the chart above:

If you dive into the data further, you can find the trend over time rises upward from about 48 percent to 55 percent. So we can see that in this controlled environment with no defenses or schemes, 3-point shooting has improved over time in the contest.

You might be asking: Well, did the recent selected contestants have better 3-point percentages during the season than the early ones? Maybe the early contestants weren't the cream of the crop?

We checked that out, and that doesn't seem to be true. The contestants' 3-point percentages have stayed constant, right around 40 percent, throughout the 3-point contest, per ESPN Insider Kevin Pelton's research.

So what does this all tell us? The evidence is pretty clear that the NBA's elite shooters have gotten better over time even though their 3-point percentages in actual games have stayed relatively flat. Which makes sense. This lends credence to the notion that shooters have gotten better over time, but defenses and sheer volume have compensated to bring the overall 3-point percentage down.

It's also true that shooters in 1987 hadn't grown up with the line and hadn't practiced it nearly as much as today's players. Bird told ESPN last year that he didn't even practice 3s at all until the day of the 3-point contest. Practice makes perfect.

And you can see that in the data as well. In the study, the first ball on the rack went in only 43 percent of the time, but improved to 51 percent on the second ball and 56 percent on both the third and fourth balls. The moneyball? Interestingly enough, that dropped down to 52 percent, either because of rushing it at the buzzer or the pressure. 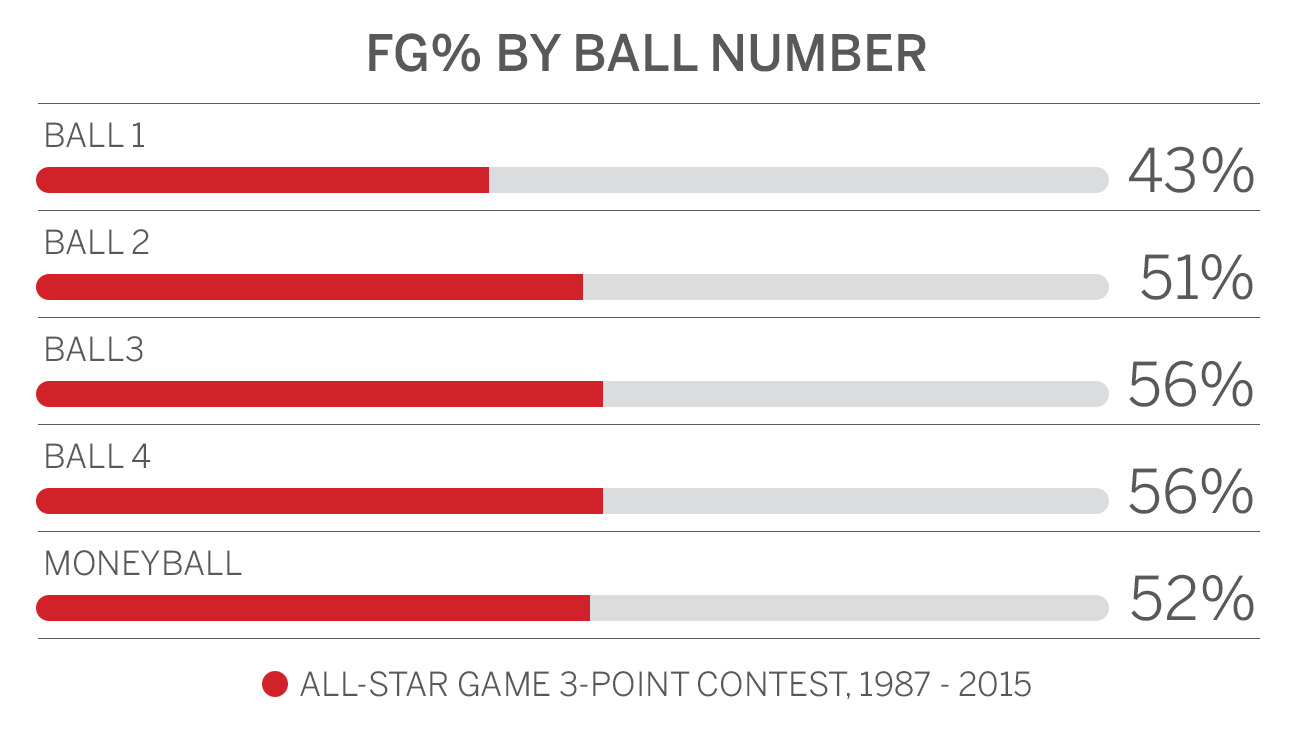 Thinking about it, it's surprising that the 3-point percentages during the contests aren't generally higher. After attending NBA practices over the past few years, we've seen sharpshooters regularly shoot anywhere from 60 to 90 percent on 3s in practice. Of course, those sessions aren't being televised around the world.

This might be as close as we can get to comparing Bird and Curry in their primes. Ultimately, once you control for defense and schemes, it's clear: The best shooters are better than they used to be. And if that's the case, Curry playing in 1987 would have been downright unfair.