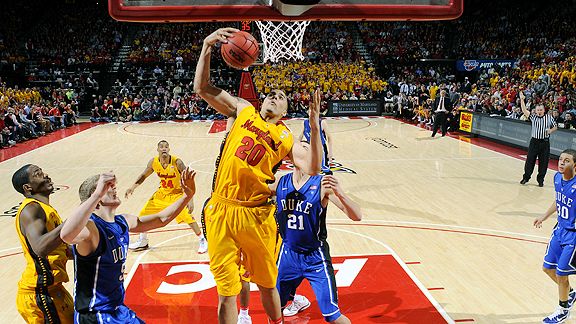 Jordan Williams' ability to crash the glass could make him a steal late in the first round of the draft.

Finding value with a pick late in the NBA draft is difficult. There may be available players who stick in the league for a short time, but finding major contributors is rare.

Here are four players projected to land in the same range who may be able to have a similar impact:

Jimmy Butler, SF, Marquette: Butler, a senior, is a versatile wing player who doesn't make a lot of mistakes and can do the understated things a coach looks for -- play defense, hit the opportunistic shot and grab more rebounds than his opponent.

Travis Leslie, SG, Georgia: Leslie is an explosive athlete whose skill set is reminiscent of the Lakers' Shannon Brown. The junior has an unrefined jump shot, but he has great explosiveness and a willingness to defend. Leslie provides energy and a change of pace off the bench.

Nikola Vucevic, C, USC: The junior big man has a midrange jump shot and is enough of a defensive presence -- a fairly rare combination. Offensively, he won't clog the lane, but he can attack the offensive boards. Defensively, he has enough bulk to hold his own in the post, and he will work on the glass, as evidenced by a 24.7 defensive rebound rate.

Jordan Williams, F/C, Maryland: Among these four players, Williams has the best chance to play consistent minutes on a good team. The sophomore has one great skill as a rebounder that will allow a coach to put him in just for that. His strength and size also will allow him to defend many NBA big men. Offensively, he will be opportunistic around the basket and safe with the ball.

Whether these players will become role players, rotation players or stars is yet to be seen. But each has the type of specialty skill that will give him a better chance at sticking with, and possibly making an impact for, an NBA team.