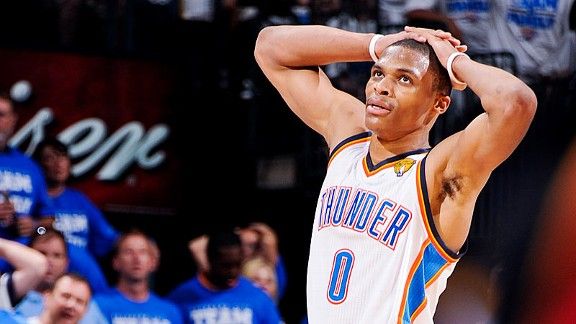 Westbrook took the most shots of anyone in the game, going 10-of-26 from the field and scoring 27 points. In some cases, the main thought seems to be that Kevin Durant, who went 12-for-22 from the field and finished with 32 points, should have gotten some of the opportunities Westbrook “took away.”

In fact, the refrain that “he takes away too many shots from Durant” has been a common criticism of Westbrook all season. The problem with this attack is that the numbers show the Thunder haven’t actually done better in games in which Durant has had more opportunities than Westbrook this season.

When looking at it the simple way, it’s apparent the team does better when Westbrook takes more shots. This is in terms of both offensive efficiency and win percentage.

Of course, field goal attempts are just one part of a player’s offensive game -- free throws and turnovers are also part of it. If we look at usage percentage -- the percentage of team plays used by a player while he’s on the floor -- we can see how often the ball ends with Westbrook or Durant, whether it be with a field goal attempt, a trip to the free throw line or a turnover.

For some perspective, the average usage percentage is 20 percent, Durant’s average this season is 30.3 percent and Westbrook’s average is 31.7 percent (fifth highest in the NBA).

Looking at which player had a higher usage percentage in each game, we can see a pattern emerge: The Thunder are more efficient offensively and win more games when Westbrook’s usage percentage exceeds Durant’s.

Another thing we can look at is how the Thunder have performed when Westbrook and Durant use a lower/greater percentage of their team’s plays than usual.

Looking at the four combinations of each player's usage percentage relative to his average:

Meanwhile, the Thunder offense is still OK (slightly below-average efficiency) when Westbrook uses more plays than usual and Durant uses fewer than usual. So shifting offensive opportunities directly from Westbrook to Durant, at least how that has been done in some games this season, does not seem to be optimal for OKC.

• The Thunder offense is at its best when Durant and Westbrook are both below average in terms of usage percentage, averaging an efficient 111.8 points per 100 possessions in those games. This would imply that getting others involved is the real key in the Thunder’s most effective offensive games.