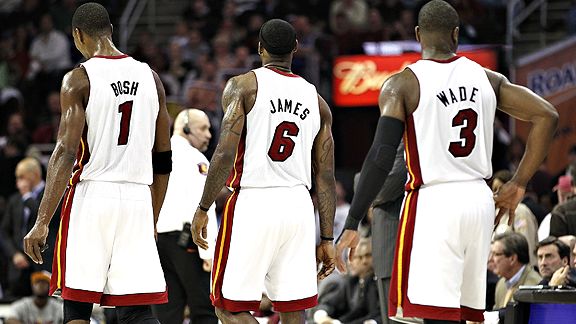 The Heat are 41-15 and have the NBA's best point differential, but there's room for improvement.

Since December, the Heat are 31-7 and have catapulted the rest of the Eastern Conference in the win column. The doldrums of November exist as a distant memory and the chemistry-building process appears to be evolving smoothly.

But despite their ascension through the ranks, this group is still very much a work in progress.

As high as the expectations were entering the season, the goals of earning a No. 1 seed for the playoffs and bringing home a championship are well within reach. With 26 games left before the regular season comes to a close, how can they max out their potential?

Here are five ways to get there:

1. Get Bosh back in attack mode

No Heat player has made more sacrifices and adjustments to his game than this guy. In the offseason, Bosh downgraded from go-to scorer to third wheel, but that slide down the pecking order has its perks, believe it or not.

Teams can’t key in on Bosh like they did in Toronto. With LeBron James and Dwyane Wade waiting in the wings, defenses run the risk of spreading themselves thin if they pay too much attention to Bosh in the post. As a result, many analysts (including me) expected Bosh’s efficiency to skyrocket with fewer double-teams and more distracted defenders. But oddly enough, that hasn’t been the case this season; Bosh’s shooting efficiency has actually tumbled from a 59.2 true shooting percentage last season to 56.4 percent this season.

Because his jumper is almost too good. Synergy video data tells us that Bosh has nailed 45 percent of his jumpers this season, which ranks among the league’s best for a big man. But Bosh is too talented off the dribble and too smooth in the post to confine himself to the midrange shot. In fact, Bosh is just nine jumpers away from matching his entire total from last season.

Easing off the pick-and-pops is a start. Rarely do you see Bosh dive to the basket after setting a ball screen, even though he shot a staggering 81.4 percent on rolls to the rim last season (only Dwight Howard was better). Actually, Synergy informs us that of Bosh’s 165 finishing plays in the pick-and-roll, only 16 (10 percent) of them have come after rolling to the basket. Last season in Toronto, rolls to the rim represented 46 percent of his pick-and-roll game. As silky as his jumper may be, that drop off is far too drastic.

Balancing the virtues of floor-spacing and efficiency that come from playing in the paint is no easy task, but the Heat will do themselves a service by encouraging him to attack the rack more often.

Early in the season, LeBron James and Dwyane Wade tended to table Heat coach Erik Spoelstra’s sets and devolve into one-on-one ball when the game was on the line.

You might know it as “hero-ball.” Spoelstra likes to refer to it as “trying to hit a home run.” Whatever you want to call it, we can agree on one thing: It’s not a healthy late-game strategy.

But the Heat are getting better at trusting the playbook and each other when it matters most. The turning point came in late January, when the Heat fell to the Knicks on a Thursday, then beat the Pistons the following night. Against the Knicks, supporting acts James Jones and Mario Chalmers missed critical wide-open 3-point jumpers down the stretch, doing little to build the Big Three’s trust in pivotal situations.

But instead of turning their backs on their teammates, a funny thing happened the next night against Detroit: James gave the ball to Eddie House on the potential game-winning play. House delivered the go-ahead points, jump-starting the Heat’s eight-game win streak that ended in Boston. In New York, Spoelstra stressed the importance of maintaining trust in the Heat’s spot-up shooters even if it doesn’t work out every time. And the emphasis paid off against Detroit and then again in Oklahoma City.

Although the Heat’s progress has been encouraging, it will only get tougher as the season goes on. The bigger the stage, the bigger the glory. As the stakes get higher come playoff time, it becomes that much more important that the Heat build sound habits and run their sets with the game on the line. James hasn’t won the big one yet, but he also shouldn’t feel like he has to hit the big one every time, either.

Miller hasn’t been healthy at any point this season. His hand continues to be sore and that won’t go away for several months. He stopped playing with an obvious limp just recently, after bruising his knee and twisting an ankle more than a week ago against Detroit.

And now, he’s battling concussion symptoms after three consecutive games that involved a blow to the head. Miller insists it isn’t serious and hospital tests for a concussion have come back negative, but the Heat held him out of Wednesday’s game against the Toronto Raptors.

But considering Miller’s laundry list of dings and dents, Miami should use this time to err on the safe side. On Tuesday, the Heat will host the 13-40 Sacramento Kings, and there’s no reason to rush him back, especially considering the hidden dangers of head injuries.

James Jones helps matters, because he can capably hold down his spot in the rotation for the time being. Jones has been a lights-out shooter, especially from the corners, and has provided strong defense on the wing. Whether it’s taking charges or chasing shooters around the court, Jones has made sure he’s not limited to being just a spot-up specialist. If you look at the Heat’s best defensive lineups, many of them feature the 6-foot-8 veteran. In fact, only LeBron has a bigger impact on the team’s defensive numbers, as Miami has been 4.2 points stingier per 100 possessions with Jones on the floor compared to when he sits (99.8 vs. 104.0).

Because of his versatility, Miller will be a big part of the Heat’s playoff core, but the Heat could take this opportunity to give him more than a week off. His body could use the rest.

Stepping out of one’s comfort zone isn’t easy -- especially when crossing that line may require physical pain. In basketball, that’s the price players pay when they take on the small-ball strategy.

If given the choice to play the power forward or the center position, Bosh, standing at 6-foot-11 and 235 pounds, has preferred to take on the role of the former and it’s hard to blame him. But he’s had to bite the bullet since the Heat are blessed with a defensive jack-of-all-trades in James. With a few exceptions, James has the size, quickness and IQ to play anywhere defensively and Spoelstra has wasted no time experimenting with Bosh anchoring the front line.

And it’s worked astonishingly well so far. According to basketballvalue.com, the Heat allow opponents to score 102.3 points every 100 possessions, which is one of the finest marks in the league. Theoretically, it would seem like sliding the slender Bosh to the center slot would cause the Heat to hemorrhage points to the other team. But that’s not the case when we look at the data. In fact, we find that the Heat have been even stingier (if slightly) when they employ Bosh at the 5, allowing 102.1 points every 100 possessions. That’s an impressive accomplishment.

But it gets better. The Heat typically score 111.0 points per 100 possessions on the other end of the floor. What about those lineups with Bosh at the 5, you ask? 120 points, which is an astronomically high figure. On the season, the Heat have outscored opponents by a total of 81 points with the unconventional lineup out on the floor.

How are the Heat thriving with small-ball? For one, they’re not actually all that small. No one’s confusing Bosh with Shaq, but in today’s game, a 6-foot-11 center has increasingly become the status quo. Moreover, James is rarely undersized with the prevalence of stretch 4s.

It’s a niche lineup now, but it could be much more than that come playoff time. Each successful stint goes a long way in expanding that comfort zone.

Pop quiz: The Heat’s defense has been at its best with which player on the court? That would be Dampier, who wasn’t even a part of this team’s plans to begin the season.

Dampier joined the team over Thanksgiving without the benefit of training camp, and was forced to learn Spoelstra’s defensive schemes on the fly, which is no easy task. And he’s actually moving well in rotations and defending the pick-and-roll much better than one would suspect given his age and size. The Heat brought him in to help anchor the defense against bigger opponents and he’s doing just that. Opposing teams score just 99.5 points every 100 possessions with the former Mavericks center on the floor, the lowest of any player on the Heat roster.

If you’ve been paying attention, you’ve noticed he’s been getting more run recently. In the two games leading into the All-Star break, Dampier received more minutes than both Joel Anthony and Zydrunas Ilgauskas combined. And considering Dampier’s defensive assignments -- more conventional big men -- there’s a distinct possibility that he’ll need to start some games in the postseason.

Dampier has been awarded primary duties against Dwight Howard and Roy Hibbert, two of the East’s top scoring centers. When Howard scored eight points in the first eight minutes in the Magic’s last meeting against the Heat, Spoelstra tabbed Dampier to take over for Ilgauskas and elected to have him replace Z as the second-half starter. After his fast start, Howard didn’t even make a bucket from the field after halftime.

Offensively, Dampier has settled down after experiencing some yips around the basket early in the season. The 35-year-old missed 10 of his first 12 shots as a member of the Heat but has shot 68.6 percent since then, thanks to a healthy dose of dunks and tip-ins. No, he won’t draw attention with his post moves by any stretch, but he’s not nearly as polarizing on both ends of the floor as Anthony.

Dampier’s defensive impact is quite promising so far, and he’s only getting more acclimated with the Heat’s system. Will he be a starter at season’s end? Probably not, but he may be their most important big man against the beasts of the East.