Bring on the Celtics
11yBrian Windhorst
NBA GMs favor Bucks to win title, Luka for MVP
2dTim Bontemps
Heat lock up Herro with 4-year, $130M extension
3dAdrian Wojnarowski
NBA stats-based win projections: Why one model has the Warriors fighting for a playoff spot
7dKevin Pelton
Hardaway, Manu among those enshrined in HOF
25d
Which NBA legends are headed to the Hall of Fame in 2023 and beyond?
26dKevin Pelton
The 'what-if' games from recent sports history
27dESPN
Apr 23, 2011 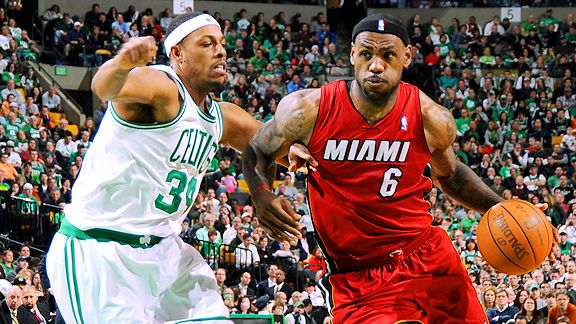 LeBron James will be playing the Sixers on Sunday ... but the Celtics lurk on the horizon.

PHILADELPHIA -- It is not proper etiquette nor gentlemanly to speak of the next opponent, a nod to the fickle momentum gods and the power the digital bulletin board.

So please excuse the Miami Heat for sticking to some standards as they politely decline to discuss the Boston Celtics, their inevitable next foe once they finish off the Philadelphia 76ers and the New York Knicks succumb in the next few days. Don’t, however, believe the mystical Celtics aren't occupying the thoughts of everyone in the Heat’s traveling party.

As Rajon Rondo was cutting up the Knicks on Friday just up the Eastern seaboard, know the Heat players were quietly cursing that he’s blasted out of his slump and beginning to steel themselves for that gathering storm. With every Ray Allen 3-pointer, Paul Pierce elbow jumper and Kevin Garnett sweaty scream, the Celtics have worked further into the Heat’s consciousness.

The Heat have been thinking about the series that will probably begin next Sunday for months like a 16-year-old views that approaching driver’s test, with horrified excitement.

Erik Spoelstra, he of the “process” and “don’t let go of the rope” philosophies, used practice on Saturday afternoon outside rainy Philly to go over countermeasures to combat the 76ers' recent defensive wrinkles. But there’s simply no way he’s not mentally preparing for the huge task ahead.

The players have been whispering about it on the bus rides and over meals as they idle on the road for two days sitting on a 3-0 lead. They’ve been speaking about it, in one way or another, since training camp. They talk to their significant others, their agents and their friends about it. It consumes them.

“It wouldn’t be right if Miami and Boston didn’t meet in the playoffs,” Dwyane Wade said Saturday, submitting just a tad to the desires of everyone to talk about what everyone is thinking about. “I think everyone was expecting that anyway.”

The Celtics have been heartbreakers for most of the last four years. They haven’t won every series, of course, but they have doled out plenty of misery to the Heat’s stars. They’ve stuck a fork in Wade and LeBron James (twice).

They forced James into the worst game of his life last May, spoiling what he genuinely thought was going to be his first championship run. No matter what anyone projects on him, James was personally vanquished by that failure. They shoved him to the sidelines in 2008, despite a 45-point Game 7 when put his best foot forward.

“I’m not ready to talk about them yet,” James said, cutting off the line of questioning.

Not talk publicly maybe, but perhaps to think about, analyze and obsess over. He made his break from Cleveland last summer in large part so he could win the series that is about to land right in his lap. There are no moral victories or learning experiences here. The Celtics have ruined the early part of James’ prime and he’s long since started to feel the sand slipping through the hourglass.

The wounds aren’t as deep for Wade. He’s got a ring at home that softens such blows. But last season, at the end of his bitter two-year rebuilding project, his Heat were slapped out of the playoffs by the Celtics. Wade vowed he’d come back for the next matchup better armed. He is and he’s ready for a fight.

As James heard Wade say these words inside a gym at St. Joseph’s University on Saturday, he let out an approving grunt. He couldn’t agree more.

In theory, though, you’re supposed to love your bigger brother because his roughhousing is a rite of passage. The Heat do not love the trash-talking and behind-kicking Celtics, though. They’re not the Heat’s big brother, they are Wade and James’ bullies.

There’s a saturation point for how much character-building comes from losing series and seasons to more veteran-laden teams. James, Wade and the rest of the Heat are so there.

So with all due respect to the 76ers and to the other teams that certainly would stand in between the Heat or the Celtics in the distant conference finals and beyond, the time to get it on is almost here. The Heat can taste it and the Celtics have probably been looking forward it as well.

One more perfunctory win from each -- both of which could happen Sunday -- is all that separates the full-on experience. It won’t be fun to play, but it promises to be fascinating to watch.