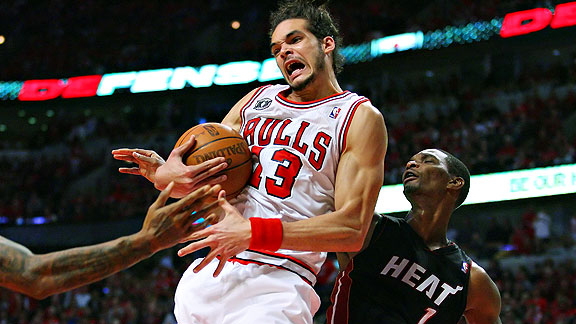 On Sunday night in Game 1, Joakim Noah was the baddest man in Chicago.

We know the Bulls annihilated the Heat on the glass in Game 1, collecting 19 offensive boards in total. The Heat secured only 58.7 percent of the available rebounds on Chicago's backboard, their worst defensive rebounding rate of the season. As Tom Haberstroh wrote, Erik Spoelstra's decision to inject speed on the court and spread the floor with smaller lineups seemed like a reasonable idea -- but the negative consequences far outweighed the benefits on Sunday night.

So how exactly did this happen? Was length the issue? Effort? Dumb luck? Were the Heat's big men out of position because they had to slide over and help, leaving the weakside glass untended? There were a ton of reasons for the Bulls' feast on the offensive glass, but when you cue up the film, a few recurring themes appear.

First, the Heat are slow to recover and rotate when the initial base defense breaks down. A perimeter player will get beaten off the dribble, prompting a big man to help. That, in turn, leaves a Bulls big man loose to crash the boards.

Second, there's a discernible lack of effort and wherewithal on several of these possessions -- guys looking to run out before a rebound is secured, or an unwillingness by Heat players to match Joakim Noah's energy. Yes, balls bounce the wrong way and bad misses have a tendency of landing at odd spots on the court. But in the vast majority of these clips, the Bulls are clearly the team who wants the ball more.

That desire showed up in the offensive rebounding column.

How: Boozer slips a high angle screen for Keith Bogans on the left side. Once Boozer dives to the basket, Bosh is trailing by a step. Bosh eventually recovers, but instead of putting a body on -- or even finding -- Boozer, he drifts underneath the rim aimlessly. When Derrick Rose misfires a jumper from the left side that lands on the far side of the basket, Boozer makes the reception, fumbles the ball briefly, then goes up for the putback.

How: Noah's primary defender on this play is Bosh. When Noah gets a swing pass from Rose at the left elbow, he blows by Bosh with a left-handed dribble. Noah's layup doesn't fall, but without a body on him, he's able to attempt a tip-back, which also fails.

How: The Bulls run a Rose-Noah pick-and-roll. Bosh actually does a nice job corralling Rose and walling off the paint, buying time for Dwyane Wade to recover. Rose kicks the ball to Boozer, who launches a face-up jumper at the top of the key. While Bosh was busy with Rose, Noah established prime rebounding position underneath. Bosh finds him, but when the ball goes up, it's a "pick 'em" between Noah and Bosh. Noah has a little more length and a little more will. He tips the ball toward the baseline, then lunges to recover it. While falling out of bounds, Noah flings the ball back to the perimeter, where it finds Luol Deng wide open for a 3-pointer. Bingo.

How: Off a Miami miss, Chicago pushes the ball and the Heat's players never find their primary defensive assignments. Nevertheless, they play pretty strong defense on this possession, but the Bulls' length ultimately gets the better of them. After a near steal by Wade, the ball frenetically works its way to Rose on the right-side perimeter. With Joel Anthony on him, Rose puts the ball on the floor and launches a floater with the clock ticking down. James had originally picked up Noah, but once the shot goes up, Noah flies nonstop to the rim. He tips the ball twice, keeping it alive, before Gibson eventually grabs it out of the air.

How: This isn't a picturesque possession by Chicago. Watson pounds the ball into the ground out on the left wing. When Chalmers slips after contact, Watson takes the opportunity to launch a toe-on-the-line long-2. The shot isn't close, and caroms back to the top of the key. Watson is quicker to the ball than Chalmers. He delivers a bounce back to Omer Asik for the layup and-1.

How: Anthony does very nice work recovering on a Rose-Boozer pick-and-roll on the right side after chasing Rose uphill. Rose is forced to swing the ball weakside to Kyle Korver. Noah, who is being guarded by Bosh, slips a screen for Korver. So what does Bosh do? Instead of staying with Noah, who makes a sharp basket dive, he steps out on Korver (presumably to stop a dribble-drive? From Korver?). Bosh faintly tries to deflect the pass, but the ball finds its way to Noah, who misses the layup -- thanks in large part to Anthony, who has come over to clean up Bosh's mess. Only problem for the Heat? Who's boxing out Boozer now that Anthony is contesting Noah? That would be nobody.

How: Wade has an unsettling habit of tumbling to the floor after botched layups in an attempt to draw a whistle. When the officials don't act, the opponent has a 5-on-4, which is what happens here. The Bulls find Korver alone on the left side for an open corner 3. He misses, but Noah, naturally, has set up shop under the basket. He has prime position over James, elevates for the ball and drops it through the net.

How: When a team's base defense falls apart with one mistake, it starts a domino effect. Deng attacks with a baseline drive from the left corner when he gets James to bite on a shot-fake (LeBron should know better). Bosh slides over from Noah to cut off Deng, but this leaves Noah free to dive to the hoop. Deng dishes to Noah on the move, at which point Anthony moves off Boozer on the weak side to contest Noah. Anthony does a nice job here but, again, who has Boozer? No one, which allows Boozer to rumble in for the miss and slam it home with authority.

How: The Heat play strong defense as Deng tears down the lane and dishes the ball off to Noah, who is pinned underneath the basket by both Bosh and Anthony. Noah flings up a bad shot that doesn't draw iron. He catches the miss then, in desperation, kicks it out to Boozer at 15 feet, who nails the jumper. Note: The official scorers credited Noah for two offensive rebounds, one off a Deng miss, which clearly looks like a pass to Noah and doesn't resemble a shot attempt in the least.

How: The Bulls post up Noah on the left block. He backs his way in against Bosh, spins middle, then flips a right-handed hook that doesn't fall. But Noah is relentless. The instant the ball leaves his hands, he's already muscling Bosh out of the way for a potential tip. Noah's work pays off, as he's able to tip the miss in for two points.

How: Rose isolates against Mike Bibby on the left side. When James cheats over from the corner, where Deng is situated, Rose kicks the ball off to Deng for a 3-pointer. Deng's shot is off, but with James already shifting his weight downcourt, Deng has free rein to follow the miss, which he does. Deng hits Bogans on the right side with a skip pass for an open 3 that misses badly. There's a loose scrum for the ball off the Bogans miss, which Boozer secures. With bodies all over the place, Boozer finds Rose alone for a 3-pointer, which goes down.

How: The Bulls run a dribble-handoff with Rose and Gibson at the top of the floor. Keep in mind that the Heat have James Jones covering Gibson. Rose eventually gets a high screen from Noah, which he uses to dribble right along the arc, corralled by both Wade and Anthony. When Noah slips the screen, Jones moves over from Gibson to pick up Noah. When Rose's shot goes up and clanks off the rim, Gibson flies in completely unattended to gobble up the rebound. He then kicks the ball out to Deng for a wide-open 3-pointer that extends the Bulls' lead to nine. Should Anthony find Gibson when Rose's shot goes up? Theoretically, but I'm not certain how much of a difference it would've made at that juncture.

How: For the second time, Deng follows up a miss by following an open path to the rim. Magloire had switched out onto Deng and never makes a concerted effort to account for him on the shot. Deng flies in for the layup. Magloire looks surprised to see Deng in the vicinity.

How: This isn't a very artful set by Chicago, as the ball ends up in the hands of Deng to improvise off the dribble from the right side. His runner in the lane is way off, and the loose ball squirts over to the left side where Watson is all alone. Where's his man, Chalmers? He's leaking out, sprinting upcourt toward the Miami basket even though the rebound hasn't been secured. Watson drains the open 3-pointer.

How: Chicago's most emphatic offensive rebound comes in garbage time, when Gibson soars above the rim to slam home a missed Watson 3-pointer. His defensive counterpart on the possession, Howard, lent help on a Korver dribble-drive (there we go again), and never made an effort to find Gibson and recover.