Rookie Antonio Gibson's versatility and Washington Redskins coach Ron Rivera's background lead to an easy comparison. Gibson could be Washington's version of Christian McCaffrey: a player who can help at running back and receiver.

"No, that's fair. He's a little bit bigger than Christian, but he's got a skill set like Christian," said Rivera, who coached McCaffrey for two seasons. "This is a very versatile, young football player that we really think is going to be a guy that can get on the field for us early and contribute." 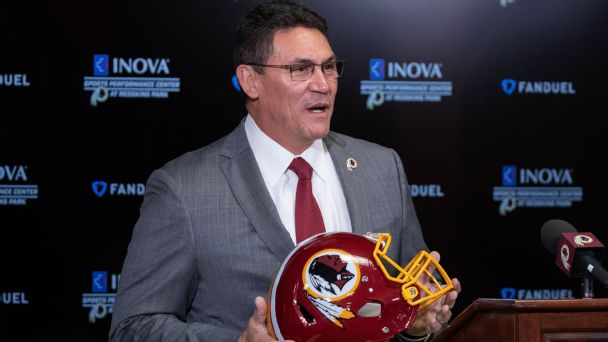 Washington took Gibson in the third round of the NFL draft, and though he played mostly receiver at Memphis, he'll play more running back in the NFL -- but with the ability to align in the slot or out wide. With McCaffrey, there was no doubt coming out of college that he would be a running back with receiver skills. With Gibson, there might be questions about how others view him -- but not how he sees himself.

"I view myself as a weapon," Gibson said.

He says the player he compares himself to the most is Chicago's Cordarrelle Patterson, a 2013 first-round pick by the Minnesota Vikings who has 195 receptions and 103 rushes. But what stood out to Gibson was that Patterson also played special teams. However, Gibson embraces the McCaffrey comparison. Gibson knows his new offensive coordinator, Scott Turner, helped coach McCaffrey in Carolina.

"I would definitely like to compare myself to [McCaffrey] because he's exactly like what I want to do," Gibson said. "I want to be in the backfield, but also I want to play in the receiving game. I feel like he's tremendous doing that, and that's what I want to bring to the team. My ability to catch effectively and make plays happen and also be able to run -- just an all-around team player and an all-around back."

Gibson does not enter the NFL with McCaffrey's body of work. McCaffrey, the eighth overall pick by Carolina in 2017, finished his college career with 6,987 all-purpose yards and 33 touchdowns at Stanford. He was a Heisman Trophy finalist. McCaffrey was first-team All-Pro in 2019 and has become the face of the Panthers after signing a four-year, $64 million contract this offseason. He topped 1,000 yards in both rushing and receiving this past season.

McCaffrey was aligned in the backfield on 895 snaps -- but in the slot or out wide on 104. He caught 93 passes out of the backfield and 22 while aligned as a receiver, according to ESPN Stats & Information research.

Gibson's promise is more about projection rather than numbers. After two years in community college, he spent two seasons at Memphis, and almost all of his productivity occurred as a senior. That's when he caught 38 passes for 735 yards and eight touchdowns and rushed 33 times for 369 yards and four scores. The Redskins view him as a running back capable of lining up at receiver.

Like this: Washington can use him on the field at the same time as another running back, whether it's Adrian Peterson or Derrius Guice or third-down back J.D. McKissic. In theory, it allows the Redskins to use a two-receiver, two-back set that forces defenses to decide: Use their base scheme or subpackage. If they opt for a base defense, the Redskins can attack with Gibson aligned as a receiver vs. a linebacker. If the opponent goes with a subpackage, then Washington could use the 228-pound Gibson to run the ball vs. a lighter box. Of McCaffrey's 287 carries, 152 occurred with defenses having at least five defensive backs on the field.

The Redskins also can use McKissic and Gibson in an empty backfield set to create coverage mismatches. Washington has questions at tight end and will have them at receiver, too, until the young players prove themselves. It had three rookie receivers last season, including Terry McLaurin, and drafted another -- Antonio Gandy-Golden -- in the fourth round.

Having versatility in the backfield -- McKissic played receiver in college -- can lessen some of those other issues. They hope.

"It's not just like a normal running back that you're like, 'OK, here's the skill set,'" Smith said.

Smith listed the reasons they're excited about Gibson: size (228 pounds); speed (4.39 seconds in the 40-yard dash) and a physical style. They also like that he can play gunner and return kickoffs on special teams, possibly filling the role of multiple players. If he plays as they hope, it provides a modicum of roster flexibility.

This won't be anything new for Gibson. He said that in high school the coaches moved him from running back to quarterback to receiver, as well as cornerback and safety on defense. He won't move around that much with Washington, but he will be used all over.

"It was more curiosity of the coaches to see what I like to do," he said. "I never had a problem with it, because I love to play. I was always open-minded."