GLENDALE, Ariz. -- Sen. John McCain, who died Saturday after battling brain cancer for more than a year, was a passionate boxing fan who long advocated for better protections for professional fighters. He was 81.

Condolences came from all corners of the sports world shortly after an aide announced the senator's death. McCain, a Navy fighter pilot and war hero, was elected to the Senate from Arizona six times and ran for the presidency twice. 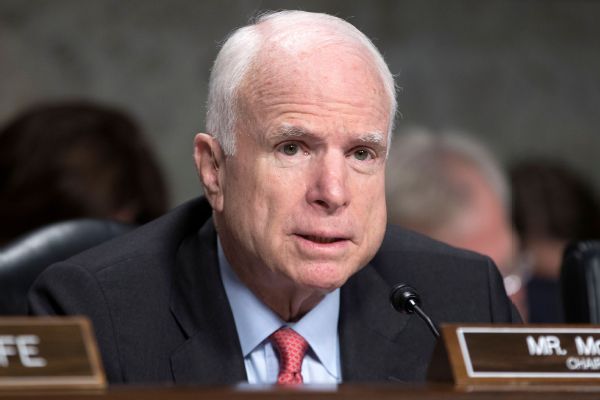 Sen. John McCain, a Vietnam war hero whose 35-year political career took him to Congress and the Republican presidential nomination, died Saturday after a yearlong battle with brain cancer. ABC News takes a look at his life and legacy. Full story

McCain boxed while attending the U.S. Naval Academy in the 1950s. In 1996, he was a key architect of, and helped gain passage for, the Muhammad Ali Boxing Reform Act, a federal law aimed at protecting professional boxers financially and medically.

"I thought the Ali Act was terrific," Arum said. "The problem is boxing changes. ... It needs to be modernized [but] very definitely it was very pro-boxers. One thing is, boxers never knew financially what was involved in a fight, and the disclosure required by the Muhammad Ali Act at least levels the playing field a little bit because we're not obligated to tell a fighter what we're getting from a network and now we are, so a fighter getting $50,000 from a main event might not [have known] the promoter was getting $1 million from the network."

"He was important in everything in boxing -- Jack Johnson, the Ali Act," Arum said of McCain. "He was the boxing senator, along with [former Nevada Sen.] Harry Reid."

Arum knew McCain for decades and recalled some of their time together.

"I remember him screaming at me ringside after the [Pernell] Whitaker-[Oscar] De La Hoya fight [in 1997], saying, 'What a robbery! Whitaker won the fight!' I shouted back at him, but he was a great fan," Arum said.

McCain's passion for boxing also shone through at the outcome of a 2012 fight in which Timothy Bradley got a controversial decision against Manny Pacquiao to claim a welterweight title. McCain took his case to the floor of the Senate and advocated for more rigorous judging standards.

He also was no fan of mixed martial arts, once calling it "human cockfighting."

"He'd come to a lot of fights," Arum said. "We'd always put him in the commission seats, and he'd always insist on paying for the tickets. I couldn't take the money because it wasn't [charged], so we took the money, added some on our own and gave it to charity. He'd pay $1,000, $5,000. He insisted on paying.

"He was a great American. I didn't agree with him a lot. He was too conservative for me, but you respected him because he believed in those things, and he was the only guy who would go across the aisle and make deals with Democrats."

Before his cancer diagnosis last year, McCain was a regular at Arizona sporting events.

He was a big fan of the Diamondbacks, who bid farewell to McCain on Twitter, posting a collage of photos of the senator at the ballpark over the years.

Goodbye to an American hero, one we were lucky enough to call a loyal fan.

Rest in peace, Senator John McCain. Our thoughts are with your family and loved ones. pic.twitter.com/KIMZS1w7Pq

Diamondbacks fans gave a standing ovation when McCain's image was shown on the video board Saturday night during the team's game against the Seattle Mariners.

"John McCain has always been a member of the D-backs' family and was one of this team's biggest fans since day one,'' team president and CEO Derrick Hall said. "He was in attendance at the expansion draft, the World Series and countless other games, remaining a fan through thick and thin. I am honored to consider him a friend, and we will miss seeing his smiling face in the stands."

The Diamondbacks are planning to hold a moment of silence for McCain during Sunday's game against the Mariners.

In an interview last year, McCain said his greatest memory as an Arizona sports fan was Luis Gonzalez's walk-off hit off the New York Yankees' Mariano Rivera in Game 7 of the 2001 World Series. On the opposite end of the spectrum, McCain tweeted his displeasure after the Los Angeles Dodgers celebrated winning the 2013 National League West title by jumping into the swimming pool at Chase Field.

McCain had a strong connection to wide receiver Larry Fitzgerald and the Arizona Cardinals. He attended Cardinals games and made an appearance at training camp before the 2017 season. Fitzgerald became friends with McCain, penning a tribute to him last Christmas and visiting him this year.

Rest in peace to an American hero, statesman, servant of the people, and dear friend. Godspeed Senator McCain. My prayers for Cindy and the beautiful McCain family. pic.twitter.com/Tj87Hb8MtY

McCain was an avid supporter of the Coyotes and worked to keep the NHL team in the Valley of the Sun after the former owner filed for bankruptcy. The Coyotes honored McCain with a bobblehead at a military appreciation night in 2011, and he dropped the ceremonial first puck before the game against the Montreal Canadiens.

McCain also attended Suns games, even wearing an orange shirt with his wife, Cindy, to join the rest of the fans. He also narrated the video for the Suns' 50-year anniversary.

McCain was a supporter of the WNBA's Mercury and Arizona State and University of Arizona athletics, as well.