Khan (33-4, 20 KOs), from Bolton, England, believes he is the bigger man, the more natural welterweight as he stepped up from junior welterweight to welterweight five years ago, while American Crawford (34-0, 25 KOs) made his welterweight debut less than a year ago.

"I've been in this division a while and I'm used to it now," Khan told ESPN. "It's the first time I've fought an opponent that I'm bigger than physically as a welterweight.

"Crawford has fought two guys who are not as well established as me and one went nine rounds with Crawford [Jeff Horn, TKO9 victory in June], the other got stopped in the last round [Jose Benavidez Jr., TKO12 victory in October]. I think the size is a big factor in this fight and it's an advantage for me. I've got a lot on my side: size, speed and power."

But Crawford has not looked too shabby since stepping up to welterweight -- he took out Australian Horn in nine rounds last June before halting Benavidez Jr in the last round in December.

Khan, on paper, might be a step up from both of the those opponents, but Crawford is still the more likely to land a knockout despite being relatively new to welterweight. Only two of Crawford's opponents in his last 10 fights have gone the distance (Victor Postol in 2016 and Raymundo Beltran in 2014), while Khan has found it harder at welterweight to stop opponents. The Briton's 39-second win over Canada's Phil Lo Greco a year ago was his first stoppage at welterweight.

Khan has also been stopped three times: by Mexico's Canelo Alvarez at middleweight in 2016, by American Danny Garcia at 140 pounds in 2012 and by Breidis Prescott at lightweight in 2008. Crawford has never been stopped. 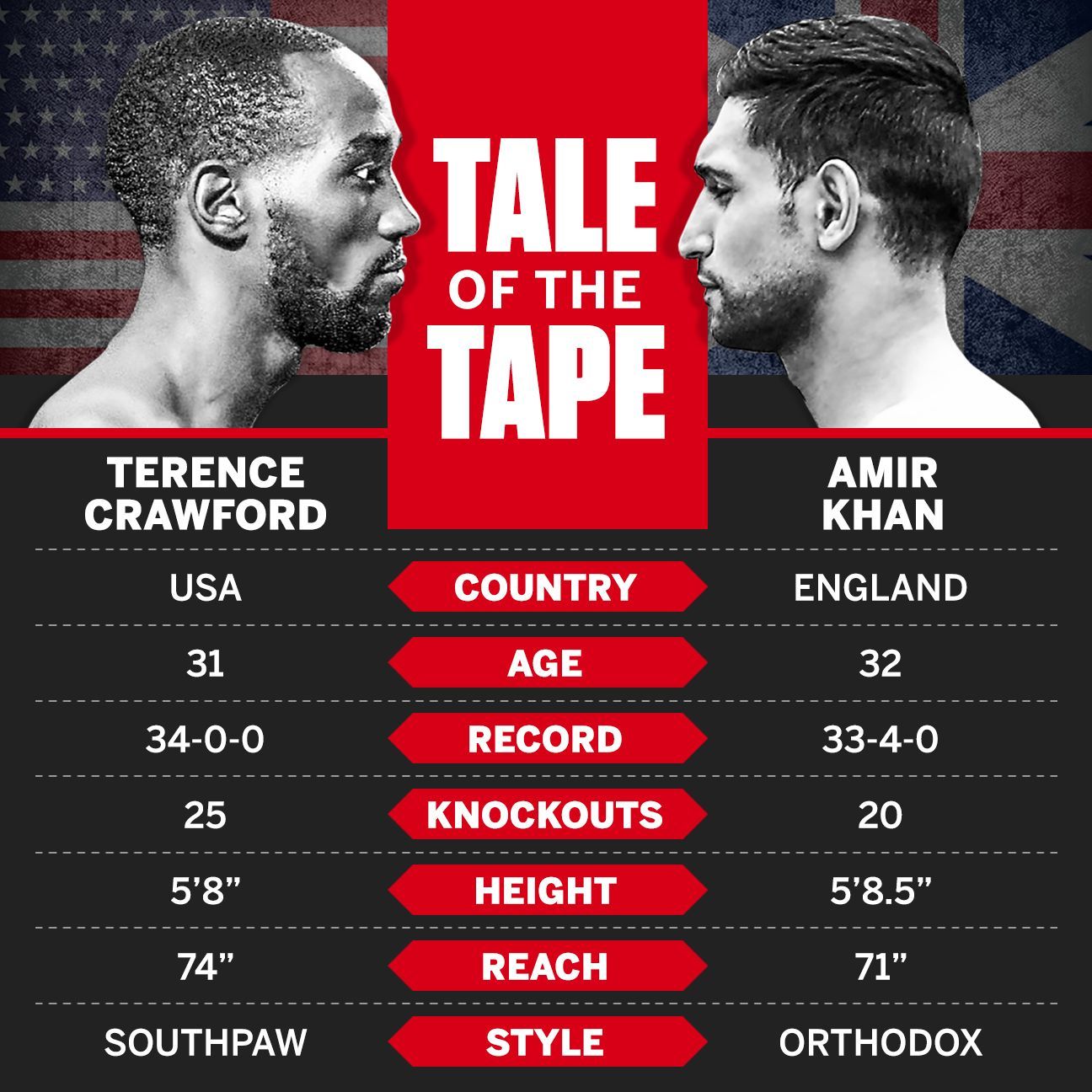 Crawford's polished boxing skills have kept him unbeaten and established him as one of boxing's standout stars.

The Omaha, Nebraska, native seamlessly switches from orthodox to southpaw and is the second-best boxer in ESPN's pound-for-pound rankings.

Khan says he has faced better boxers than the 31-year-old Crawford has -- but that is hugely debatable.

"I just feel that, technically, I have faced better fighters than he has," Khan said on a conference call. I don't know if I have faced a better fighter than him, but I know I'm going to be more than ready for whatever he brings to the table. He's one of the best fighters out there and I have to be on my A game to win this fight."

Crawford can adopt many different guises in the ring: boxer-puncher, marauding attacker, spoiler or box off the back foot.

Crawford chose to patiently dismantle Benavidez Jr. in his last fight as he forced a last-round stoppage in a first defense of the WBO world welterweight belt.

Khan looked shaky in his last fight, a unanimous points win against Samuel Vargas in September, when he failed to dispatch an opponent he was expected to. Khan's vulnerability, as well as his speed, were there for all to see as he twice floored Vargas but also touched down himself.

But expect Khan to be tactically smarter for this fight. He is back with trainer Virgil Hunter, who has recovered from illness.

"There were a lot of wobbly moments in my last fight and I should have stopped him or knocked him out -- he should never have been in the same ring as me. Luis Collazo just beat [Samuel Vargas] and that shows you -- I beat Collazo quite comfortably five years ago.

"But it was because of a change of trainer and a change of style and everything happened so quickly. That's when I realised I should go back to training under Virgil."

Khan might be improved with Hunter in the corner, but Crawford has consistently delivered whereas Khan was disappointing in his last fight, and knocked out two fights before that.

Khan's greatest asset has always been his speed, and if he is going to cause an upset against Crawford it will be because the American has failed to deal with Khan's fast fighting style.

Khan, who trains in Oakland, California, might be 32, but he is not slowing down as was evidenced by his demolition of Lo Greco. Stoppages have been rarer for Khan in recent years but his hand-speed still wins him fights.

Crawford has outstanding hand-speed himself, as well as great reflexes on the back foot.

It will be interesting to see who wins the speed battle -- and Khan might be especially dangerous early on, as he tries to unsettle Crawford with a furious assault and unrelenting tempo.

"The size is the most important thing in this fight, and the speed I have with that size," Khan said.

Khan might be quicker, but he will still have to make it count and land accurately.

Crawford is unquestionably in better form. He has not lost a fight and is regarded as one of the most complete and best fighters in the world. Moreover, his last five opponents failed to go the distance.

Khan, however, has had mixed form and fortunes. OK, he won his last fight, but it was not a performance to worry the likes of Crawford or Errol Spence Jr., the IBF titleholder who defeated Mikey Garcia last month. Khan was also knocked cold by Canelo in 2016 and has boxed just three times in as many years due to injuries and an appearance on a reality TV show in the U.K.

Crawford gave up the undisputed junior welterweight world championship and moved up to welterweight, where he outclassed Horn to claim a belt in a third weight division.

Khan, on the other hand, has not held a world title belt since 2011, although it should be noted he recorded decent wins over elite fighters such as Devon Alexander and Luis Collazo in 2014 before boldly jumping two weight classes to take on Canelo.

Khan says Crawford has not been tested yet at welterweight. But he will have to do a lot better than his last fight to be that test.