Tiger Woods is favored to get off to a good start at the U.S. Open, but Las Vegas oddsmakers suggest it's all downhill from there.

Woods, a 60-1 long shot to win the tournament, is a minus-120 favorite to find the fairway on his opening tee shot Thursday at Chambers Bay. He's an underdog the rest of the way.

The Westgate SuperBook lists Woods at 60-1 to win the tournament, his worst odds of any tournament he has entered since 2008, according to ESPN Stats & Info.

During his prime, Woods once was favored in 35 consecutive tournaments, a stretch that ended at the 2010 PGA Championship, according to ESPN Stats & Info. Now, he's nearly a 2-1 underdog to best either Brooks Koepka or Billy Horschel.

And, even at 60-1, the odds as a true reflection of his game are likely being kind. 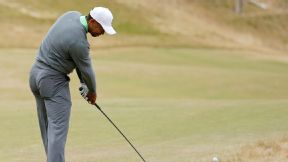 Tiger Woods might be a 60-1 long shot to win the U.S. Open, but he's still attracted the fifth most wagers at the Westgate SuperBook in Las Vegas. Some of the prop bets involving Tiger:

Two weeks ago in the third round of the Memorial, Woods hit it 85 times, a career high. He is ranked 195th in the world and is finding the fairway on only 48.9 percent of tee shots. That's reportedly not the type of game suited for tricky Chambers Bay.

But, yes, people are still betting on him. As of Tuesday, Tiger had attracted the fifth most wagers to win the tournament at the SuperBook. Only eight fewer tickets had been written on Woods than on favorite Rory McIlroy. Among the donations to the SuperBook was a $500 bet on Woods at 50-1. Good luck.

McIlroy is the consensus favorite at around 6-1, followed closely by Masters champion Jordan Spieth at 8-1. But no one is attracting more action than Phil Mickelson (15-1). More bets have been placed on Mickelson to win than any other golfer at CG Technology, the Stratosphere and the SuperBook.

Spieth had attracted the most money at the SuperBook, followed by McIlroy. Mickelson is third. Woods is fifth.

"He presents our largest liability," SuperBook assistant manager Jeff Sherman said of Woods, "just because with his long odds, it adds up rather quickly."

Sherman set the over/under on the winning score at 279.5 or ½-under on the quirky par-70 Chambers Bay. Tipped out, Chambers Bay is 7,900 yards, with links-style attributes that present challenges for golfers and oddsmakers.

"This looks more like a British Open, but it's supposed to play with the difficulty of the U.S Open," Sherman said. "There's just a lot of uncertainty for everyone. We'll see what happens."