<
>
Over a third of the U.S. can legally bet on sports: Here's an updated map
15dRyan Rodenberg
The worst ATS season ever for every NFL team
17dNFL Nation
NFL schedule release: Tom Brady's Bucs an underdog in Week 1 lines
22dESPN.com staff
The incredible comeback you probably didn't hear about: Phil Galfond talks overcoming €900,000 deficit
21dPreston Johnson
Super Bowl odds and over/unders for all 32 NFL teams
43dJoe Klingele
Wait, Secretariat has 263 U.S. roads named after him?!
29dRyan Hockensmith
MJ's other Bulls legacy: The 185-game streak you don't know
43dDavid Purdum
Ranking every Division I college football team's strength of schedule
38dPhil Steele
What does a pro sports bettor do without sports to bet on?
70dPreston Johnson
The great Belichick-Brady betting debate: Who is more valuable?
58dDavid Purdum
No NFL, NBA, MLB or NHL to bet on? These esports offer an alternative
63dArda Ocal
End of a betting era: The Brady-Belichick dynasty
New England Patriots
72dDoug Kezirian
How does regional home-team bias impact sportsbooks?
128dDavid Purdum
'I thought I was Rain Man:' The dying art of the parlay card wiseguy
169dDavid Purdum
'They're going, Oh, s---.' How Jeopardy! James blew up a game
359dDavid Purdum
Best bet of the 2010s? The New England Patriots
New England Patriots
151dDavid Purdum
The betting event of the 2010s: Mayweather vs. McGregor
154dDavid Purdum
May 14, 2020

After New Jersey's Supreme Court victory in May 2018, any state can legalize sports betting.

At the same time various state lawmakers are considering sports betting legislation. Congress is too.

Last updated on May 1, 2020. Data provided by American Gaming Association. 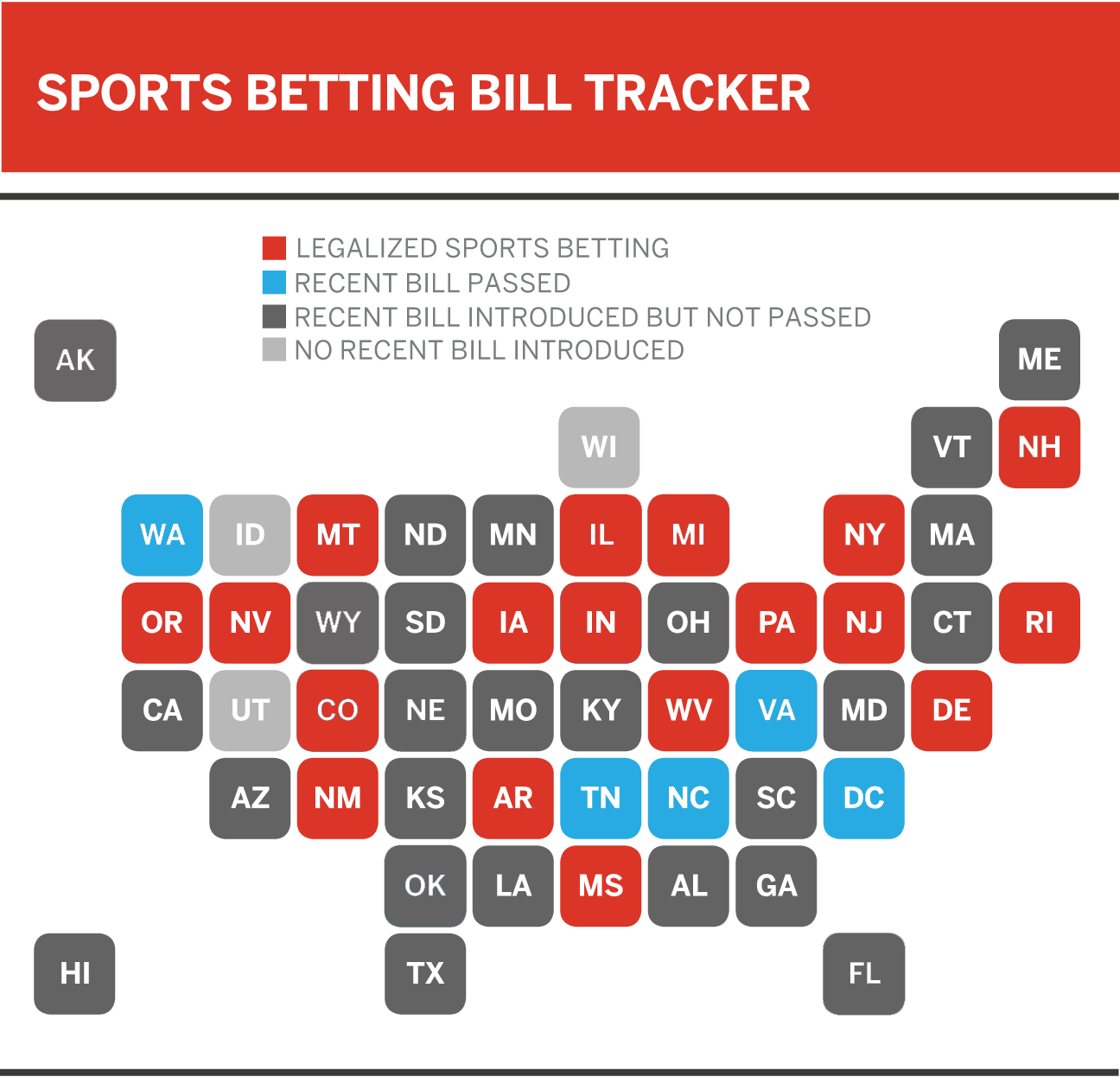 No longer the only state to permit a wide variety of legal sports betting, Nevada is a mature market that has existed for decades. Many states might look to Nevada for the best practices in the regulation of sports betting. Nevada could even be designated as a national hub of sorts, via agreements with other states on topics such as oversight, liquidity, line monitoring and risk management.

On Aug. 30, 2018, West Virginia became the fifth state to offer legal and regulated sports betting when the Hollywood Casino -- a sportsbook owned by Penn National -- opened its doors. The move came six months after the West Virginia legislature passed a new bill with the West Virginia Lottery Commission serving as the chief regulator. Both in-person and online sports wagering are permitted under the law.

On Oct. 16, 2018, the Santa Ana Star Casino & Hotel booked its first sports bet in partnership with Nevada-based USBookmaking. Although New Mexico has not passed any new sports betting legislation since the Supreme Court's decision, the move by the Santa Ana Star Casino & Hotel was made via a gaming compact with the state. According to Nedra Darling, spokeswoman at the Department of the Interior's Office of Indian Affairs -- the federal agency in Washington, DC that oversees tribal gaming compacts -- the New Mexico compacts permit "any or all forms of Class III Gaming," a category in the federal regulations that specifically includes "[a]ny sports betting and pari-mutuel wagering." Published reports indicate that bets will not be permitted on games involving the University of New Mexico or New Mexico State University.

The Hollywood Casino at Penn National Race Course booked the first legal sports bets in Pennsylvania in mid-November 2018. The move came just over a year after Gov. Tom Wolf signed a new sports betting bill as part of a broad legislation push that included online poker and DFS. The October 2017 bill became effective after the Supreme Court's May 2018 ruling upending the federal ban on single-game betting outside of Nevada. A number of other sportsbooks have also obtained a license to operate in Pennsylvania. In a June 15, 2018 letter to Pennsylvania officials, the NFL expressed concerns about consumer protections, data and enforcement issues under the bill.