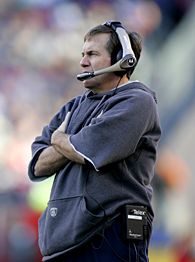 Maybe if the Pats had just used audio, SportsNation wouldn't be so disappointed.
Back in early August, we polled SportsNation on a plethora of issues regarding cheating in sports as part of a sitewide initiative called Cheatwave. In fact, we even took it off the field and asked how much you cheat in real life. If we ever find out which of you are in the 37% that take food that isn't yours from the communal refrigerator, expect a knock on the door.


In the light of the recent developments concerning the New England Patriots spying on the New York Jets and stealing their defensive signals, we decided to look back at what you told us before the season began. What did you think of the scenario when it was laid out to you as a hypothetical?


Look at the results below and join the Conversation to talk to other fans about what exactly constitutes cheating in the NFL.


The following results are from polls conducted from Aug. 9-10. To see complete list of NFL questions asked, click here.


A LITTLE EXTRA PEEK
Home teams often place video cameras on the sideline to record the opposing team's signals. The cameras are placed on the sideline under the guise that they provide extra game tape for the home team's coaches. When road teams attempt to get credentials for their sideline cameramen, the applications are usually rejected.


Your opinion on this issue hasn't changed. After it was announced that NFL commissioner Roger Goodell found the Patriots violated league rules and is considering severe sanctions, SportsNation weighed in with 68% agreeing that the Pats deserved some kind of punishment. Not surprisingly, the voters from Massachusetts, Vermont, New Hampshire, Rhode Island and Maine didn't agree.


SPYMASTER
Most teams send a scout to watch the game of the next opponent. The scout sits in the press box and tries to pick up signals from the other team. The team being scouted, however, will often have a coach on the sideline wearing a headset that is not plugged in, and he gives bogus signals to throw off the scout, as well as the opposing team.


So cheating is against the rules, but trying to embarrass the cheaters is perfectly OK. We like where you are going with this one, SportsNation! What if the Patriots had been videotaping bogus signs and found themselves in the wrong formations which led to a loss? Would we still be clamoring for sanctions? Right now, 32% of SportsNation feels the Patriots should lose multiple draft picks and pay a fine. Is that just because their actions might have paid off?


SIGNAL INTERCEPT
After the Dolphins defeated the Patriots 21-0 in Miami last season, Dolphins linebacker Zach Thomas claimed he knew the Patriots' audibles. He wasn't kidding. Teams sometimes will place microphones on their defensive players to tape the opposing team's audibles. The team then matches the audibles with the play the offense runs. In the shutout loss to Miami, the Patriots played their worst game of the season, as Tom Brady was sacked four times. Coincidence?


Wait a minute, SportsNation! Let's get this straight. Videotaping signals is bad, but audio is good? So if Peyton Manning walks up to the line and says "Blue 42, Red 38, Green 34", and you know exactly what that means from having taped it previously and frantically compared it to past plays, that's acceptable? How is that different from video?


We want to hear more of you feedback on the Patriots' situation, these poll results and anything else you have to say about cheating in the NFL. Join the Conversation below to sound off.