RICHMOND, Va. -- After Johnny Oates was diagnosed with a
brain tumor in 2001, he made a commitment to live each day to its
utmost.

Knowing his time was short motivated Oates to climb out of bed,
even if it was just to see squirrels in the backyard or feel the
sun warming his face.

Oates died Friday at the Virginia Commonwealth University
Medical Center at about 2 a.m., his wife and brother at his side,
his son said. He was 58. 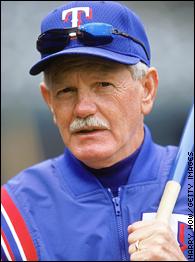 Oates was best known for managing the Texas Rangers to their
first three postseason appearances, in 1996, '98 and '99. He
resigned early in the 2001 season after the team lost 17 of its
first 28 games despite the offseason addition of $252 million free
agent shortstop Alex Rodriguez.

For Oates, the diagnosis of the aggressive tumor glioblastoma
multiforme helped him to focus on the things that mattered most to
him, primarily his family.

"When you look at it, it's a blessing," he said in a March
2003 interview with The Associated Press at his home near Richmond.

"Really there's only one day of the week that has any
importance, and that's today," he said then. "You can't do
anything about yesterday and you can't do anything about tomorrow.
It's just today."

Oates left an indelible mark on the Rangers. When Oates was
inducted into the Rangers Hall of Fame in August 2003, manager Buck
Showalter dedicated the manager's office with a plaque honoring
Oates.

"That will always be Johnny's office. We're just renting it and
passing through," Showalter, who played for Oates, said Friday.
"The definition of man and manager, Johnny's picture will be next
to it."

Texas will retire Oates' No. 26 before a game dedicated to
him next season, the team announced Friday. A commemorative patch
will adorn the Rangers' uniforms all next season, and the club will
place the number 26 on the outfield wall, pending approval from
baseball.

Oates shared the American League Manager of the Year award with
New York's Joe Torre in 1996, and managed the Baltimore Orioles
from 1991-94.

He was considering a return to managing in October 2001 when the
tumor was diagnosed. Doctors told him he'd likely die within months
without surgery, and possibly within 14 months even if he had the
procedure.

Oates survived more than three years, achieving goals such as
attending the wedding of his daughter, the birth of a grandchild
and simply spending more time with his wife, Gloria.

"It was a pretty courageous fight," said John Blake, a former Rangers spokesman who worked for the organization when Oates coached in the '90s.

Showalter was among the friends that called regularly.

"Gloria said one of their prayers was that he would be in
Heaven before Christmas," Showalter said. "I bet there will be a
heck of a baseball game up there tomorrow ... no, the day after
tomorrow. It will take John time to get organized."

Oates had a regular season record of 797-746 and got his only
postseason victory in 10 tries when the Rangers made their playoff
debut, winning 6-2 at Yankee Stadium on Oct. 1, 1996. Texas lost
the next three games and was swept by the Yankees in 1998 and again
the next year.

Oates and his wife began each morning studying the Bible in the
sunroom of their home on Lake Chesdin, about 30 miles from
Richmond, and were active in their church. Oates also attended
local baseball games and enjoyed watching on television, free to
doze off when he grew weary.

"I don't miss baseball one single bit. I enjoy talking about
it, but I know I can't do it anymore. I like to watch it on TV,"
he said.

"I miss the people. I don't miss the stress that went with it,
all the decision-making. But now I enjoy being here. I enjoy being
lazy."

Oates, a left-handed hitting catcher, played for five teams in
his major league career, starting with the Orioles in 1970. He
laughed years later recalling how his skills compared with those of
current catchers.

Oates' funeral will be Tuesday in Colonial Heights, followed by
burial in Chester.