Many people across America will ask, "Why Chi?"

Why did Chicago get the first ESPN local site to itself? They will ask what makes us so special. What makes us think we are so special? Why did ESPN choose the Windy City? They will find fault.

As a city, we don't have a problem with any of that. Most of us will accept it because we are so used to it. Try living here and you'll understand. If you are born and raised (and gonna die) here, you more than understand ... you embrace it. We are -- in our minds -- the most slept-on, overlooked, underappreciated sports city in the world.

In our minds, this site, one dedicated to all of Chicagoland sports at every level, is long overdue. Because when it comes to the games we all play, watch and love, no one -- and I repeat no one -- on any corner of any block in any city any place in the world got swagger like us.

These reasons only further our proof:

Because we turned the saying "Good Guys Wear Black" into a rally cry.

Because our Cubs blue is truer blue than Yankees or Dodger blue.

Because the words "upscale" and "sports" don't mix here.

Because when it comes to sports, we die harder than Bruce Willis.

Because we have a Claes Oldenburg-designed steel sculpture of a 100-foot baseball bat on the corner of Madison and Jefferson in the middle of the city for no damn reason!

Because Michael, Scottie and Phil got us six rings.

Because our players only cry after winning.

Because only here can you have two sides of town that hate each other because of their beloved teams while they will never ever be a threat to one another in winning a World Series.

Because we will put this city up against any city in the world when it comes to diversity, knowledge and passion for sports. There isn't a city that exists that holds our desire for sports on an everyday basis.

Because we're about to host the Olympics in 2016.

Because Jackie Robinson is a league to us, not just an icon.

Because only here could a car dealership (Chicagoland Chevrolet Dealership Association) get Michael Jordan and Muhammad Ali together for an ad.

Because of Walter Payton.

Because we just won the Jay Cutler sweepstakes.

Because no other place can handle the annual pain that comes along with loving the Cubs.

Because when the Blackhawks eventually win the Stanley Cup, we will -- in all of our belligerent arrogance -- have the gall to say to anyone who is listening, "We told you so!" 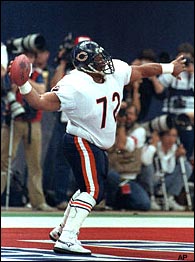 Because we have Ozzie and they don't.

Because we were the originators of "March Madness."

Because we were too stupid to trademark the phrase and too forgiving to sue someone -- anyone! -- for copyright infringement.

Because as far as we're concerned, there is still no team in the history of the NFL that could beat the '85 Bears.

Because we play with 16-inch Clinchers (TM).

Because we drink Old Style and Olde English at games.

Because we hoop on ice, golf in snow, row on frozen ponds, play beach volleyball on hard sand, do marathons on North Face and play soccer on grass that won't bend.

Because what Green Bay calls a "tundra," we simply call "a football field."

Because "strikeout" is much harder than "stick ball."

Because we validate the existence of a sports jinx.

Because Patrick Kane and Jonathan Toews are the next Crosby and Malkin, and ESPN wants to get an early jump on covering them.

Because the women at Wrigley Field look better (and can drink more) than women who go to baseball games in any other city in the country.

Because our "W" doesn't stand for a hotel chain or a former president.

Because we consider pitching pennies a sport.

Because win, lose, draw and lose again, we rep our teams like Drew Rosenhaus reps his clients.

Because we use our brown paper bags for sneaking booze into stadiums, and we don't use them to show we're embarrassed of the team we came to see.

Because we (not Denver) made "Rock and Roll, Part 2" famous.

Because we nurtured a Rose from concrete.

Because at least 81 times a year, we "take you out to the ballgame."

Because we'd rather build a spaceship inside of our football stadium than do what the Yankees did to theirs.

Because on any given day, at any given sporting event in the city, Oprah or Obama could be sitting next to you.

Because of what Devin Hester is about to do this season.

Because no one gives the term "ride or die" more meaning when it comes to sports teams than us.

Because of the overtly obvious reasons not even worth mentioning.

Because we got Mike Ditka, fool.

Scoop Jackson is a columnist for ESPN.com and ESPNChicago.com.