A quick guide of what to look for as the bowl season begins.

Outback: Iowa vs. Florida
Two teams that have next year written all over them. Iowa overachieved by playing great defense and sending kicker Nate Kaeding onto the field (17-of-18 FGs, 36-of-37 PATs). The Hawkeyes play solid ball and wait for the other team to screw up. Enter Florida, as inexperienced as it is talented, a team that battled itself as much as it battled other teams. The Gators led Miami, Ole Miss and Florida State in the fourth quarter and lost all three games. If freshman quarterback Chris Leak and his band of non-shavers pull it together, we will get a preview of a preseason top-10 team.

Gator: Maryland vs. West Virginia
Rematches are usually as interesting as leftovers. But this game needs no microwave. It will reheat itself. No two teams improved more over the course of the season than these two. The Terps beat the Mountaineers, 34-7, on Sept. 20. West Virginia remade itself, starting 1-4, then winning its last seven games to take a share of the Big East Conference championship. Maryland, after an 0-2 start, finished 9-3. When both offenses get the ball, the field seems to tilt downhill toward the end zone. The Mountaineers have the huge advantage of revenge.

Insight: Virginia Tech vs. California
If the Hokies feel sorry for themselves because they're playing in Paradise Valley one week before the Fiesta Bowl, they'll feel even worse when they leave. The Golden Bears, expected to struggle this season, instead went 7-6 and found a star in sophomore quarterback Aaron Rodgers. Pittsburgh and West Virginia torched the Virginia Tech defense late in the season. And guess what? The Hokies aren't the only team in this game that knows how to block a kick. Cal got three punts this season. If you're a Virginia Tech fan, take solace in knowing that Bear kicker Tyler Fredrickson had five field goals blocked. Cal can strut all it wants about beating USC, 34-31, in triple overtime but the Bears played eight bowl teams and beat only one other one -- Southern Mississippi.

Capital One: Georgia vs. Purdue
The best of the rest. It's odd to see a Joe Tiller team win on the strength of its defense, which the Boilermakers play the good ol' fashioned Big Ten way. The Bulldogs fought to overcome injuries all season long. They will be healthier on Jan. 1 than they've been since spring practice. Two of the best safeties in the nation, Sean Jones of Georgia and Stuart Schweigert of Purdue, are worth watching on every snap. The young Georgia offensive line won't catch any breaks against this pass rush.

Music City: Auburn vs. Wisconsin
If this list is heavy on SEC vs. Big Ten, that's because they are the two best conferences this season. Two teams that love to play physical football are going to Nashville. Watching Tiger tailbacks Cadillac Williams and Ronnie Brown try to find room against the Badger defense will be fun. Watching Badger wideout Lee Evans is always fun. Two teams that underachieved this season could use a jumpstart on 2004. The winner gets one. 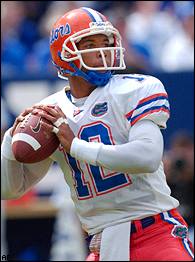 1. Vince Young, QB, Texas
The Texas freshman took over the offense at midseason and played as if he got better on every snap. After two weeks of bowl practice, a month of spring practice and all of August, there's no telling how much better he'll be. Catch him against a Washington State defense that loves to pressure the quarterback, and see how well he gets away.

2/2A. Marion Barber III and Laurence Maroney, RBs, Minnesota
This pair of Minnesota tailbacks combined for 2,149 yards and 26 touchdowns on the ground. They've got an offensive line that returns relatively intact, and they'll be playing in the Sun Bowl against Oregon, which allowed only 95.9 yards rushing per game.

3. Leroy Hill, LB, Clemson
Questions surrounded how well this undersized (6-foot-1, 205 pounds), untested junior middle linebacker would be able to quarterback a defense that returned only four starters. Hill responded by becoming one of only five players in the nation to make at least 100 solo tackles. The Tigers finished third in the ACC, allowing only 329.2 yards per game. The only question for 2004 is how good Hill can become.

4. Josh Bullocks, S, Nebraska
The turnaround of the Nebraska defense can be seen in this sophomore, who learned on the job in 2002, then broke out this season under new coordinator Bo Pelini. Bullocks led Division I-A with 10 interceptions, and the Huskers led the nation in turnover margin at plus-20, one season after finishing at minus-3. At 6-feet-1, 195 pounds, Bullocks has the range to play center field, and he always seems to be where the ball is. He'll be tested against the passing offense of Michigan State, which loves to flood the field with receivers looking for empty space.

5. Mathias Kiwanuku, DE, Boston College
As a freshman in 2002, the Boston College defensive end had five sacks. As a starting sophomore, he finished the regular season with 10.5 sacks. Kiwanuku is tall (6-foot-6) and quick, which should make interesting the way he tracks down Colorado State quarterback Bradlee Van Pelt, who is quick to pull the ball down and take off.

1. Oklahoma
I mean, c'mon. Did you see the Kansas State game?

2. UCLA
Injuries and inexperience left the Bruins point-starved this season. With the departure of transferring quarterback Matt Moore, UCLA joins Tennessee at the top of the list for quarterbacks looking to play immediately.

3. Georgia
The Bulldogs never had the opportunity to play together when healthy, and the inexperienced offensive line can use all the work it can get. The dividends will pay in 2004.

4. Kansas
The Jayhawks, after a 4-1 start, finished 6-6. The defense allows nearly 200 rushing yards per game, and North Carolina State tailback T.A. McLendon will have had four weeks to get healthy after another injury-plagued season. Philip Rivers, the most unforgiving quarterback in college football, also awaits. If you have a flaw, Rivers will find it. The Kansas defense has plenty of flaws.

5. Navy
Don't get me wrong. I'm glad that the Midshipmen got a bowl bid. Their 8-4 record may be the feel-good story of the season. But watching those slow, well-disciplined, slow, undersized, slow defenders trying to stop Texas Tech's offense could get downright uncomfortable.

1. USC WRs Mike Williams and Keary Colbert vs. Michigan CBs Jeremy LeSueur and Markus Curry
The best pair of the receivers in the nation (yes, Texas; look at the numbers) against one of the top secondaries.

2. LSU offensive interior (Center Ben Wilkerson, Guards Rudy Niswanger, Nate Livings and Stephen Peterman) vs. Oklahoma defensive interior (Tackles Tommie Harris and Dusty Dvoracek)
Harris, a Lombardi Award winner, clears out the middle to allow the linebackers to do their job unencumbered. Peterman, a three-year starter, is the star of the middle for the Tigers.

3. Kansas State tailback Darren Sproles vs. Ohio State weakside linebacker A.J. Hawk
Sproles can squirt through the line or circle around to make a catch. Hawk, a 6-2, 230-pound All-Big Ten linebacker, has seven inches and 60 pounds on Sproles. What happens if he encounters him in the open field?

4. USC punter Tom Malone vs. Michigan punt returner Steve Breaston
Malone averaged more than 49 yards per kick, and when he didn't angle it out of bounds, the Trojans covered well enough to lead the nation in net punting. But Breaston needs only a little room to break away.

5. FSU strong linebacker Michael Boulware vs. Miami tight end Kellen Winslow
Big players, big games. Winslow caught seven passes for a season-high 106 yards in a driving rainstorm in Tallahassee. He wasn't that effective again this season. The Seminoles and the Hurricanes always bring out the best in each other.

1. Larry Fitzgerald, WR, Pittsburgh
Just a hunch, but he's gone. The Pittsburgh wide receiver is a sophomore, and the NFL won't sign anyone who hasn't been out of school three seasons. But Fitzgerald has been out of high school for three seasons. He went to prep school for a year before he enrolled at Pittsburgh. The NFL isn't looking for a fight. Anyone with a legitimate interpretation of the rule is likely to get through the door.

2. Stuart Schweigert, S, Purdue
The Purdue safety has been a steady member of the Boilermakers for four seasons, even as a freshman in the Rose Bowl season of 2000. He combines great instincts with sure tackling, and is always a pleasure to watch.

3. Rod Davis, LB, Southern Miss
The Southern Mississippi middle linebacker has been a force since his freshman season, and has the size and speed to attract a lot of attention from the NFL.

4. Bruce Perry, RB, Maryland
As a sophomore in 2001, the Maryland senior tailback carried a big chunk of the load in leading the Terrapins to the ACC championship. He spent all of 2002 injured and most of this season as well. But the Perry in November looked like the Perry of two seasons ago.

5. Bo Schobel, DE, TCU
The TCU defensive end has a great first step and a fast motor. He is a big reason that the Horned Frogs have maintained a winning pace under coach Gary Patterson.

Five Best Performances Of The Past 10 Years

2. Tommie Frazier, 1996 Fiesta, 16 rushes, 199 yards, 2 rushing TDs.
The Nebraska quarterback closed out his career with a legendary performance in the 62-24 victory over Florida that gave the Huskers a second consecutive national championship. Frazier broke eight tackles on a 75-yard touchdown run in the third quarter.

3. Major Applewhite, 2001 Holiday, 37-55-3, 4 TDs, 473 yards.
In a rollercoaster senior year in which he was benched, then nearly led a comeback against Colorado in the Big 12 Championship, Applewhite started and led the 'Horns to a comeback 47-43 defeat of Washington.

5. Ron Dayne, 1999 Rose, 27 carries, 246 yards, 4 TDs
The junior set himself up to win the Heisman the next fall with this bruising performance, leading the Badgers to a 38-31 victory over UCLA. Dayne rushed for more than 200 yards in three bowl games.