The inaugural ESPN.com All-Bowl team highlights the best players in what are supposed to be the best games. Not all of them turned out that way, of course, but not every player who had a great season had a great postseason (paging Jason White). Conversely, a few players on this team would need photo ID to get into the team meeting, if we ever had one. Raise your hand if you knew who T.J. Stancil was before Dec. 31.

After the first few bowls, it appeared as if the All-Bowl team would be lacking a defense. But as the games got bigger, and the teams got bigger, the defenses started to shine. What's that they say about defense winning championships?

If you're looking for a player from your team, keep in mind that there are 24 players and 28 winning bowl teams. By the way, the coach of the All-Bowl team won a national championship game, but his name isn't Carroll or Saban. That's because the bowl he won is named the Amos Alonzo Stagg Bowl.

John Gagliardi, St. John's (Minn.). Gagliardi has done amazing things in his career, but never before has he played David and Goliath in the same season. The St. John's coach passed Eddie Robinson earlier this season to become the all-time, all-division leader in coaching victories. Gagliardi followed that with a storybook finish, leading the Johnnies to an upset of mighty Mt. Union in the Division III final, 24-6. The victory, the 414th of Gagliardi's career, ended Mt. Union's 55-game winning streak and was only its second loss in 111 games.

DT: Chad Lavalais, LSU. Tackles don't generally get big numbers, and such was the case with LSU All-American Lavalais, who finished with four tackles in the Tigers' 21-14 defeat of Oklahoma in the Sugar Bowl. But two of the tackles came out in the flat, where tackles aren't supposed to be fast enough to reach "skill" players. Lavalais is, and he's a big reason that LSU limited Oklahoma to 154 total yards.

DE: Kenechi Udeze, USC. Udeze, a junior, made five tackles against Michigan, and made them count: three sacks for 22 yards, and a fourth tackle for loss. The Trojans sacked Wolverine quarterback John Navarre nine times, only six fewer than he suffered all season.

DT: Dwan Edwards, Oregon State. The senior led a line that limited New Mexico, the 11th-best rushing team in the nation to six yards (221 below its average), seven first downs and 127 total yards in a 55-14 rout in the Las Vegas Bowl. The 6-5, 305-pound Edwards finished the game with six tackles and 1.5 sacks, which equaled his regular-season total.

DE: D.D. Acholonu, Washington State. Acholonu sacked Texas quarterback Chance Mock twice in the fourth quarter. The second sack, with the Longhorns threatening to send the Holiday Bowl into overtime, forced Mock to fumble with 2:16 to play. The Cougars recovered and held on to the 28-20 victory. 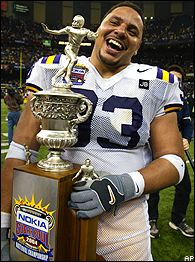 LB: Lionel Turner, LSU. Turner, the Tigers' second-leading tackler during the regular season, made two game-turning sacks of Jason White in the Tigers' Sugar Bowl victory. The first one, 17 yards behind the line, snuffed out a third-quarter Sooner drive and earned White an intentional grounding penalty. The second, good for nine yards, came on fourth-and-everything for the Sooners. It would be Oklahoma's last offensive snap of the game. Turner led LSU with nine tackles.

LB: Demorrio Williams, Nebraska. Williams concluded an outstanding career with two sacks and a third tackle for loss in the Huskers' 17-3 smackdown of Michigan State in the Alamo Bowl. The Spartans, who led the Big Ten in passing during the regular season with nearly 280 yards per game, gained only 174 total yards against the Huskers.

LB: Karlos Dansby, Auburn. Late in the Music City Bowl, with Auburn trying to protect a 21-14 lead, Dansby, the Tigers' All-SEC senior, sacked Wisconsin quarterback Jim Sorgi in the shadow of the Badgers' goal line. Auburn recovered at the Badger 1, and Cadillac Williams scored on the next play with 1:37 to seal a 28-14 victory. Dansby, who made 10 tackles, forced two fumbles, and finished with 1.5 sacks, led the Tigers in holding the Badgers to a season-low 261 total yards. 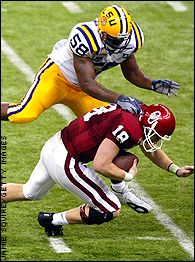 S: T. J. Stancil, Boston College. The junior didn't make a single pick in his 12 regular-season starts. He finished the season with three, as the Eagles intercepted five of Colorado State passes in a 35-21 victory in the San Francisco Bowl.

FS: Morgan Scalley, Utah. Scalley, a 5-10, 194-pound, first-team Academic All-America, returned a fumble 74 yards for a touchdown and set up the Utes other teouchdown in the 17-0 shutout of Southern Mississippi in the Liberty Bowl.

CB: Will Poole, USC. The senior, who didn't crack the starting lineup until after the season began, finished his All-Pac-10 season with 10 tackles, two of them sacks, forced a fumble and broke up five passes in the Trojans' victory.

CB: Jamaine Winborne, Virginia. With eight tackles, two of them behind the line and one of those a sack, Winborne led the Cavaliers' shutdown of Heisman runner-up Larry Fitzgerald. The Pittsburgh wide receiver caught five passes for 77 yards. He didn't catch a touchdown pass, breaking an NCAA-record 18-game streak. Virginia won the Continental Tire Bowl, 23-16.

P: Kyle Basler, Washington State. Basler pinned Texas inside its five-yard-line four times, and the Longhorns were able to return only one of Basler's seven punts, in the Cougars' Holiday Bowl upset. 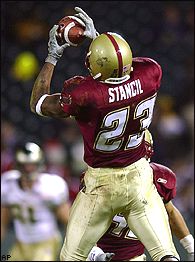 G: Max Jean-Gilles, Georgia. Late in the second quarter of the Capital One Bowl, with both of Georgia's starting guards out because of injuries, Georgia second-team All-SEC sophomore tackle Jean-Gilles slid over. With his teammates telling him what to do on many plays, the 6-8, 340-pound Jean-Gilles plugged the hole. Quarterback David Greene finished 27-of-37 for 323 yards and three touchdowns in the Bulldogs' 34-27 overtime defeat of Purdue.

C: Jake Grove, Virginia Tech. The senior closed out his All-American career with a tremendous effort in the Hokies' 52-49 loss to California in the Insight Bowl. Virginia Tech gained 551 total yards. They scored seven touchdowns, didn't punt until the third quarter and didn't fumble or throw an interception. The Hokies lost a shootout (that score is in regulation) but it can't be pinned on the offense.

G: Lamar Bryant, Maryland. Bryant's consecutive starting streak of 30 games ended at the beginning of the season while the 6-3, 313-pounder rehabbed a broken right foot. Bryant missed three games, then made his first start against West Virginia. He also made his last start against the Mountaineers, when the Terps once again dominated WVU, 41-7. The offense gained 522 total yards, committed no turnovers, converted 13-of-20 third downs and allowed only one sack.

OT: Trai Essex, Northwestern. The 6-4, 310-pound junior graded out the highest for a Wildcat offensive line that produced 237 yards and a touchdown for tailback Jason Wright in only 21 carries in the 28-24 loss to Bowling Green in the Motor City Bowl. 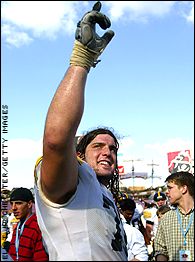 QB: Philip Rivers, NC State. In his 51st and final start, Philip Rivers completed 37-of-45 passes for 475 yards and five touchdowns in North Carolina State's 56-26 victory over Kansas in the Tangerine Bowl. Yeah, it was Kansas, but those numbers are tough to achieve against air.

FB: Chad Jasmin, Clemson. Jasmin ruined his anonymity in last chance. The Clemson senior, who graduated in August, had the first 100-yard game of his career in the Tigers' 27-14 defeat of Tennessee in the Peach Bowl. The 5-10, 225-pound Jasmin rushed for 130 yards and a touchdown on only 15 carries.

TB: P.J. Daniels, Georgia Tech. The All-ACC tailback blew through Tulsa for 307 yards and four touchdowns on 31 carries in the Yellow Jackets' 52-10 embarrassment of the Golden Hurricane in the Humanitarian Bowl.

WR: Samie Parker, Oregon. Parker punished the Minnesota secondary by making 16 catches for 200 yards and two touchdowns in the Ducks' 31-30 loss to the Gophers in the Sun Bowl, the best game of the postseason.

WR: Keary Colbert, USC. Colbert emerged from the shadow of teammate Mike Williams in a big way in the Rose Bowl. Colbert caught six passes for 149 yards and two touchdowns, the second of which matched Williams' one-handed touchdown grab against Oregon State. Colbert parried with Michigan corner Jeremy LeSueur with his left arm and cradled a deep pass from Matt Leinart with his right for a 47-yard score.

WR: Rashaun Woods, Oklahoma State. The senior paused on his way to the first day of the NFL draft to catch 11 passes for 223 yards and a touchdown in the Cowboys' 31-28 loss to Ole Miss in the Cotton Bowl.

PK: Rhys Lloyd, Minnesota. Though California kicker Tyler Frederickson did make a field goal as time expired to beat Virginia Tech, 52-49, in the Insight Bowl, the winner is Lloyd, whose 42-yarder with 23 seconds to play provided the Gophers with the victory. If Frederickson misses his kick, the Bears go into overtime. If Lloyd misses his, the Gophs go home.