NEW ORLEANS -- His teammates call him Papa Matt. And judging by the life he's been juggling the past few months, they couldn't be more right.

While they're worried about where they're supposed to be on the football field and when they're supposed to be in class, Matt Mauck has quarterbacked the LSU offense, aced his schoolwork and planned a February wedding. All while prepping for the biggest test of his life -- no, not the OU defense -- the entrance exam to dental school.

He's taken the test, passed it, and already applied to a handful of medical schools, opening up a new mental tug-of-war. Sometime after the completion of Sunday's Nokia Sugar Bowl, Mauck will have to decide whether or not to forgo his senior season and quit football in order to enroll in dental school. 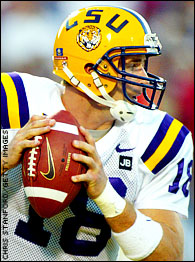 "I've always wanted to be in the medical field and this would give me the opportunity to do that," Mauck said. "At this point, I have no idea what I'm going to do. I just wanted to keep all my options open."

Imagine giving up the starting quarterback's job at the best team in the SEC, not to mention all the benefits that come with it (go ahead, let your mind wander) in exchange for the privilege of poking and prodding in some stranger's mucus-filled, cavity-ridden mouth.

"Not me. I couldn't do it," said LSU receiver Michael Clayton, who himself is weighing a decision to leave school early for the NFL. "But at the same time, it's a situation where going to dental school can set up his career and set him up for life. And if that's his best opportunity, he's got to take it."

The fact is, Mauck faced a similar decision four years ago: sports or life. He chose sports, electing to sign a minor league contract with the Chicago Cubs instead of accepting a scholarship offer to play quarterback at Michigan State.

Three years later, the small-town Indiana kid, stuck in Class A Lansing (Mich.), some three miles down the road from where the Spartan football team practiced, regretted the decision.

"I just felt I was spinning my wheels in life," said Mauck, who signed as a third baseman but was converted to catcher. "It wasn't my passion. And when you have that many games in a row in front of like 10 or 15 people, you better really love baseball. I didn't."

After his third year in the minors, Mauck dialed up Nick Saban, who had since left East Lansing for LSU, wondering if there might be a scholarship available for a 21-year-old freshman. There was.

"I went back for the full ride and to play football a little bit," Mauck said. "That was it."

Along the way, he reinvented himself from an option quarterback who completed zero passes in his first spring game, to a multiple-threat drop back quarterback who can read defenses, find the open man and move the football with his arms or legs.

"It sounds easy to say that, but it was tremendously hard because that's not his nature," offensive coordinator Jimbo Fisher said. "But he did it. He completely transformed himself as a quarterback."

Now he's on the verge of leading LSU to its first national championship since 1958. All while juggling school, entrance exams, applications and a Feb. 21 wedding.

It's delicate balancing act, what with maintaining a 3.72 GPA in the classroom while juggling football, medical exams and deciding between this or that.

"Nothing flusters him," Fisher said. "I mean nothing. When it's football time, he's able to solely focus on football. When it's studying time, he solely does that. When it's time for whatever else he has to do, he can focus solely on that. It's incredible."

Complicating things is that an NFL career is still an option. Pro scouts aren't exactly beating down Mauck's door. But his productivity in college will at least get him a look at the next level. The question is whether he wants to spend more time proving himself, just like he did in the minors.

When he came to LSU, his thought process was this: go to college for four years, play a little football, get a degree, get into med school, then move on. But football success has gotten in the way.

Dental school will still be there next year. But Mauck can't help if it's time to grow up. If it's time to stop playing the games and start being an adult.

"I really have no idea," he said. "I've just told people that I'm going to keep all my options open and they've sort of run with it. So we'll just have to see what happens."