NEW ORLEANS -- LSU defensive tackle Chad Lavalais has one of the most fascinating personal stories to tell at the Nokia Sugar Bowl.

But he won't say a word about it.

Failing his college entrance exams multiple times, working as a prison guard and eventually getting accepted to college to become one of the biggest football stars in school history? It's all off the record.

But there's a reason. Growing up in the fishbowl that's Marksville, La., population 5,537, Lavalais was the biggest thing before a Super Wal-Mart broke ground last year. Even when he visits now, cars line the street in front of his mother's home, just to catch a peek of the LSU star. 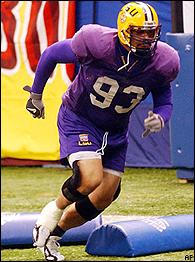 Yet Marksville's brightest star was also its biggest disappointment. Lavalais took the job at the Avoyelles Parish Correctional Facility to hide from questions as to why the best prep football player the area has ever seen couldn't pass his ACT. He had to get away from the questions, the jokes and the snickering.

Now, four years and one national Defensive Player of the Year award later, the questions are still there. The only difference is they're being asked by reporters.

"I don't want to be rude," he said Thursday. "And it isn't like I'm all scarred or distressed from this awful life or something. I just don't like to talk about it. And if you don't know the story by now, something's wrong."

The nutshell is this: On two separate occasions, Lavalais signed to play football with LSU, only to fail to achieve a qualifying score on his ACT (once by a single point). He spent two years away from football, a span in which he moved to Atlanta to work at a department store and later returned to Louisiana and took a job as a prison guard. Then, first-year coach Nick Saban encouraged Lavalais to take the ACT again. After working with tutors, Lavalais passed. Since then, he's become an All-American defensive tackle and a veteran leader on one of the top defensive units in the country.

"People are so attracted to his story because it's such a positive one," said Benny Brouillette, Lavalais' high school coach. "They look at what Chad's done and they realize there's always a chance. Never say never."

Now, the same people in Marksville that ridiculed him want to have a parade in his honor. It's a tad uncomfortable. It's the reason Lavalais won't tell his mom when he's coming home. "I think sometimes she's the leak," he said. When he is there, he spends most of his time hiding in the back of the house.

"There's always people popping up, coming over, wanting to see what I'm up to," he said. "I just want to keep it low-key."

During his last visit to Marksville over Christmas, the 13-year-old son of one of Lavalais' cousins stopped by for a picture. Turned out the kid was bragging in school that he was related to Lavalais, but nobody would believe him, so he cried.

"I heard the story and I was like, 'Boy, you're too young to be crying over anything like that,'" said Lavalais, who took a picture with the kid that you better believe will be headed to school. "That's just silly."

Brouillette says Lavalais is "definitely" the biggest thing to ever come out of Marksville. But the defensive tackle isn't so sure.

"You have the casino up there, that's a pretty big deal," Lavalais said. "And now there's a Super Wal-Mart. We always had a Wal-Mart, but now it's upgraded to Super Wal-Mart. So I'm not so sure."

Ask his LSU teammates to describe Lavalais and they use words like "humble," "leader" and "determined." When Saban announced to the team after the SEC title game that Lavalais was a finalist for the Outland and Lombardi trophies, the senior stood up in front of the team and told them that if he won, the awards belonged to them.

And despite his colorful personality and ability to rattle off a few catchy quotes, Lavalais is pegged by most of his teammates as quiet. He's talked about the circuitous path that brought him to LSU in the past, but has grown tired of the topic.

After the SEC title game victory over Georgia, defensive end Marcus Spears about fell over when he witnessed Lavalais, all 6-foot-3, 292 pounds of him, jumping up and down in the center of the locker room, celebrating.

On the field, Lavalais always seems to be in the thick of the action. So far this season, he's made 57 tackles, 16 for loss and seven sacks. More importantly, he's eaten up blockers and freed teammates to make plays. And when they're tied up, he steps in.

"I can't tell you how many times we're sitting in a game, waiting for somebody to step up and make a play and then all of the sudden, here comes Chad," LSU defensive coordinator Will Muschamp said. "He's a dominating force."

But it wasn't always that way. After missing his ACT score by one point in 1998, Lavalais went to a cousin's wedding in Atlanta and stayed for a year. He avoided home. He avoided football. LSU administrative assistant Sam Nader, now an assistant athletic director, did his best to keep in touch with Lavalais, to encourage him and let him know that the Tigers were still interested. Lavalais even lied -- telling Nader he had taken the ACT on occasions that he hadn't.

"He had thrown up his hands, nearly given up a couple times," Nader said earlier this year. "Thank goodness he hung in there."

On five different occasions, Lavalais took the ACT but fell a point or two shy of the minimum requirements. After returning home, he took the job as a prison guard, where he worked from 5:30 p.m. to 5:30 a.m, while everyone else in town worked at the casino or on local farms.

"I wouldn't say he was disappointed," Brouillette said. "I'd use the word discouraged. (Marksville) is a place where everybody knows everyone's business. And it didn't help when people kept asking him about it.

"That just added more fuel to the fire. He found out who his true friends are."

After passing the test, Lavalais enrolled in LSU as a 20-year-old freshman. He started three games that first season and all 37 since.

"I don't know anybody that plays as hard and wants it as bad as he does," Brouillette said. "He deserves all the success that's come his way."

Perhaps best of all, Lavalais is on pace to graduate in May with a degree in education.