MIAMI -- He is a martyr, an undefeated coach, and above all else, Auburn coach Tommy Tuberville is a seer. Tuberville made his case for the Tigers' national championship hopes in an informal press conference, and when it broke up, he stuck around for a few extra minutes. 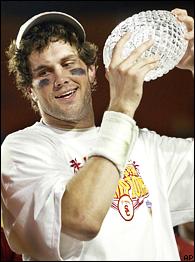 "It'll be over before the half," Tuberville said. "You give Norm Chow a month to get ready for somebody ... "

You give Chow a month, and you give USC four first-half turnovers, and you give up any chance of the FedEx Orange Bowl living up to the hype that preceded it. In truth, the game lived up to half of its hype -- the Trojans did their part.

Oklahoma, on the other hand, gave the worst performance in a national championship game since Florida's 62-24 loss to Nebraska in the Fiesta Bowl nine seasons ago. Early in the fourth quarter, three-quarters of Pro Player Stadium, was practically empty, a testament to the size of the Sooner Nation that came to Miami and the size of the 55-19 victory that propelled the Trojans to their second consecutive national championship.
No one outside of Auburn football office saw this coming.

"I expected them to give us a tougher game," USC tailback Reggie Bush said. "There was so much hype with the two Heisman Trophy winners, the two Heisman finalists at running back, the number of All-Americans on both teams. ... I was very surprised. We just beat one of the most respected teams in college football, embarrassed them on national TV."

The Sooners drove 92 yards for a touchdown the first time they had the ball, and then they began to play as if they were trying to do too much.

Senior wide receiver Mark Bradley made a freshman mistake, trying to field a punt that had all but rolled dead, and the Trojans recovered the fumble on the Oklahoma 6. USC tailback LenDale White scored on the next play.

Sixth-year quarterback Jason White threw three interceptions, one that he threw while jumping backward. It looked as if it came down in the middle of a Trojan defensive huddle.

"That's what you really soul-search as a coach," Bob Stoops said after the game, "how this could happen. You can get on a roll like that. They're good enough as it is, and you're contributing to it with your mistakes."

USC has that effect on teams. Former Stanford offensive coordinator Bill Cubit, talking last month of how the Trojans came back from a 28-17 deficit to beat the Cardinal, 31-28, said, that his players eventually pressed and began to run poor routes, throw a hair too quickly.

So it was that Shaun Cody got the first sack that Oklahoma All-American tackle Jammal Brown has given up in 21 games. Brown also got busted for holding, a tactic he typically doesn't need.

"We had guys swarming to the ball," All-American nose tackle Mike Patterson said. "It made it easy."

USC, with scoring drives of six, eight and 10 yards, had the good manners to accept every gift that Oklahoma offered. It took only 34:18 for the Sooners to give up the most points that a Stoops team has allowed in his six seasons in Norman.

It took less time than that to determine which team is the undisputed national champion. They're a little sensitive about the undisputed part after last season.

"It feels a lot different," USC defensive end Lawrence Jackson said. "We're getting the whole pie. We don't have to share it."

Tuberville, one night removed from Auburn's victory in exile at the Sugar Bowl, might have wondered why his Tigers didn't get another crack at the Trojans. Or maybe he was glad they didn't. This way, the Tigers can always maintain that they didn't get a chance.

Auburn lost at home to USC, 23-0, in the 2003 opener in the debut of the little-known lefthanded sophomore named Leinart.

"It's that three-step drop," Tuberville said. "We had a good defense. Those quick throws took our line right out of the game."

Tuberville called his shot, which not even the most ardent USC fans dared do. On the sideline before the game, a former undergraduate intern in the Trojan athletic department sounded nothing more than hopeful.

"I'm not that confident," said Will Ferrell, who gave up a lucrative career in sports information to try acting. "The two teams haven't seen each other. I don't think Oklahoma has seen anything this complex."

Who knew? Ron Burgundy can do sports.

As Jim Donnan pointed out in his ESPN.com GameDay Live chat, when the Trojans scored on the six-play, 89-yard drive that ended in that 54-yard pass from Leinart to Jarrett, they lined up in six different formations, using three different motions. That's the Tao of Chow, the Trojan offensive coordinator who deftly finds holes where none appear to exist.

It helped that he has at his fingertips some remarkable athletes. Tight end Dominique Byrd made a can-you-top-this, 33-yard touchdown catch in the first quarter, fighting off linebacker Rufus Alexander with one hand, then turning around to catch Leinart's pass with that same hand.

Wide receiver Steve Smith then topped it, making acrobatic catches of 5 and 33 yards for second-quarter touchdowns.

Leinart, the quarterback who drives these Trojans, completed 18-of-35 passes for 332 yards and a school-record-tying five touchdowns. When Lynn Swann of ABC turned to Leinart to interview him, the Trojan fans in the stadium began chanting, "One more year! One more year!"

When Leinart equivocated, saying, "I can't answer that right now," the fans booed.
"Aw, come on!" Leinart protested. Seconds later, he added, "It would be great to get a three-peat. That's never been done before."

The Trojan fans in their quarter of the stadium roared. The rest of the seats were empty. Even Shaquille O'Neal, the guest coin-flipper, left in the middle of the third quarter.

"I feel sorry for the crowd," Bush said. "People paying hundreds of dollars, thousands for the good seats, expected it to be a good game."

Everyone, that is, but Tuberville. He saw what the rest of college football did not. USC is the one and only number one.