TEMPE, Ariz. -- He could have rotted in that jail cell. Could have sat there, rudderless and defeated, when his 29-day sentence ended last year.

But Marty Johnson didn't do that. He couldn't, actually. Not on Utah coach Urban Meyer's watch.

At 8 p.m. Saturday night, Johnson will start at running back for the Utes in the Tostitos Fiesta Bowl. Even the 24-year-old Johnson, a rare seven-year college athlete, can't fathom that. "Everything I've been through, to be playing in a BCS game?" Johnson asks, almost in disbelief. "I couldn't have dreamt up a better end to my career." 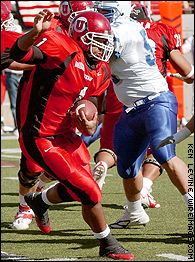 He wishes he could rewrite the beginning, though. Johnson spent 1998 at Boise State, then transferred to Butte Junior College, where he set a school record with 3,388 rushing yards in 1999-2000. After transferring to Utah, he suffered a crippling rib injury in 2001 and received an NCAA medical redshirt. In his first two games of 2002, Johnson finally looked like the blue-chip recruit he'd been five years earlier, leading the nation in rushing with 405 yards in the first two games of that season. But he ripped up his knee in week three and needed another medical redshirt to preserve a final year of eligibility. He got it. But before he could ever carry a football again, though, Johnson had a much bigger problem than injuries.

Alcohol use became a problem. His decision-making, so solid between the tackles, slipped. In 2002, he drove drunk and rammed into a car, then fled the scene. Last year, he had another DUI and was shipped off to Salt Lake County Jail. That could have been it for Johnson. He could have dropped out of school, forgotten about football and spent the rest of his life at or behind bars.

Back at Utah, pressure mounted from inside and outside the program for Meyer to cut his losses with Johnson. "A cancer," Meyer recalls people calling his player. The decision was easy. Meyer kicked Johnson off the team. "It was over," the coach says.

But then Meyer plopped down one day and his eyes focused on a story about an innocent victim killed in a DUI accident. That paper sat there and stared at him for days, until Meyer reversed course. Johnson needed help, the coach decided, or else he'd have to flip open the paper every day and have to worry that Johnson's name would be associated with something like that.

On prison mail day, inmates around Johnson's cell would hush as guards came around with the mail, their only chance for contact with the world outside all that cement and steel. Many inmates traipsed off without a letter. Johnson usually had plenty to read. Most envelopes had the same name on the return address: Meyer, Salt Lake City. He got tough-love encouragement from his football coach. But a half-dozen came from Meyer's wife, Shelley, who has a degree in psychiatric nursing, specializing in addiction. Even 11-year-old Gigi Meyer took time to pen rousing notes for the 24-year-old running back.

Meyer visited Johnson in prison, too. He saw the orange jumpsuit. Saw a young man in despair, but ripe for guidance. So Meyer said something even Johnson never expected. "We want you back," his coach said. Not on the team, necessarily, he said. Just back. He just didn't want to see Johnson in a jumpsuit again. Meyer laid out a 12-point program for Johnson to get his life back on track. Football? Well, let's stick to life, Meyer told him.

When Johnson walked out of prison last winter, he carried with him a mail pouch heavier than a football. The Meyer family became that rudder he so badly needed. "They took me in," Johnson says. "They could have easily just let me be somebody else's problem."

But make no mistake, Johnson had to earn it. Meyer's a nice enough guy in the media room. Ever heard of Black Wednesday? That's how Meyer weeded out his roster at Bowling Green in 2000. He lined up trash cans along the practice field, then weeded out bad seeds by running players until they returned their breakfasts. Call Johnson's 2004 something along the lines of "Black Most Days."

He ran. A lot. He had to call the Meyer household every weekend night and check in. He had to go through alcohol rehabilitation. He couldn't go anywhere for spring break but the Utah weight room. And he put his football fate in the hands of Utah's Football Leadership Committee, a panel of 15 elected players.

That panel watched as Johnson changed his life. He spent the spring on probation. He dressed but didn't play in the spring game. As summer wound down, Johnson was still off-limits to the media and his fate wasn't yet known. In the locker room, though, he had proven himself. He'd gotten a nod of approval from his peers.

"They based their decision not on football," Johnson says. "It was about wanting to see me get my life straightened out."

So far, Meyer and his players look like saviors. On Sept. 2, Johnson started and ground out 77 yards on 20 carries against Texas A&M. He rushed for 105 yards and a touchdown the next week against Arizona, and two weeks later crushed Air Force with four touchdowns. He leads Utah with 782 yards and 14 rushing touchdowns.

He already has his degree in sociology and is working toward a second in economics. Most importantly, he hasn't had a drink for a year-and-a-half. "Once I got away from my old lifestyle for awhile, it wasn't hard," Johnson says. "I have the Meyers and my teammates to thank for that."

All of Meyer's praise for Johnson comes with a warning, no doubt endorsed by his wife. "Now, if he thinks it's over, it's not over," he says. "He's got a long way to go. He's one major mistake away from ruining his life."

But then his heart starts barking. He never thought he'd see Johnson in a Utes uniform again. Yet, here he is.

"We came up with a stringent program for him to return to the team," Meyer says. "He did 'em all, and he did 'em fast. To see him as the starting tailback for the Fiesta Bowl is a dream come true. That hotel room is a lot different place than he was last year at this time."