NEW ORLEANS -- The roar echoed through the brick walls in the basement of the Superdome without any trouble. It was coming from the Auburn locker room -- the screaming, the yelling, the singing.

All celebrating like they had won the national championship. 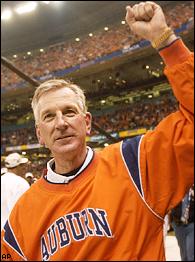 On the other side of the wall, friends and family hushed one another up, placed their ears against the wall and listened into the heart of the Auburn football program. It was then that coach Tommy Tuberville spoke.

"It doesn't matter what anybody else tells you," Tuberville told his team. "We're national champions."

And just like that, the room erupted. The fans outside clapped. And regardless of computers and polls and coaches and sportswriters, anybody backing the Tigers felt like they were on top of the college football world.

Reality says that Tuesday night's winner of the BCS title game between USC and Oklahoma will finish No. 1 in both the AP and the ESPN/USA Today coaches' polls. And the Tigers didn't exactly help themselves with a sleeper of a 16-13 victory over Virginia Tech here Monday.

But inside that locker room, inside the Tiger football family, nobody seemed to care. They are national champions. They finished the season 13-0. They won the SEC championship. They beat the ACC champions in the Hokies. And three other teams ranked in the top 10.

Somebody -- the Football Writers Association perhaps -- will crown Auburn No. 1, Tuberville believes. And when they do, he said the team will receive national championship rings.

"I've got a subscription to Golf Digest. I'm going to call them and ask them if they'll vote us No. 1. It means as much as the other ones. I'm telling you, when you went 13-0, you should be national champion. There's no doubt about it. We've done all we can do."

Tuberville's argument is a strong one. Only five teams in SEC history have ever finished the regular season 12-0. Four of those went on to win the national championship. The fifth, Florida in 1995, lost to Nebraska in the title game.

It isn't like years past, in which three 12-1 teams carped over who deserved the title. The Tigers never lost. They did everything the schedule asked. They met every task their coaches put in front of them.

Beat No. 9 Virginia Tech, a team on an eight-game winning streak, in a pressure-packed, everybody's watching bowl game? Not a problem. 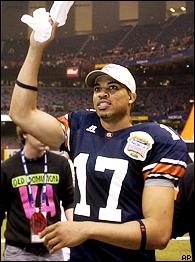 Yet after the Tigers paraded around the Superdome floor Monday night, after they waved their Auburn flags, sang their Auburn songs, led the band in the Auburn fight song and even did a New Orleans version of the Lambeau Leap into the Auburn student section, there were no trophy presentations to speak of.

Just a self-generated celebration that culminated on an ESPN set, where players flashed the No. 1 in front of every camera they could find.

"It's a little strange, to think about the season we just had and not have somebody presenting us a trophy," guard Danny Lindsey said. "But it doesn't matter. This is the greatest season I've ever had in any sport. Undefeated. I can't describe how great it feels."

In the days leading up to the game, Tuberville, the Tigers and even Beamer made their pitch as to why the Tigers should be playing in the Orange Bowl, not the Sugar Bowl.

"I believe they're one of the best two teams in the country," Beamer said.

After the game, Beamer said he would stick to the "company line" and let the Orange Bowl decide the national champion.

Auburn needed a dominant performance to upend the Sooners or Trojans for No. 1, but likely didn't get it. The Tigers came out of the gate quickly, picking up 66 yards on its first two plays from scrimmage, but were held to field goals in each of their first three scoring opportunities. They added a touchdown to open the second half, building a 16-0 lead and then held on as Virginia Tech mounted a late rally.

And the 16-13 final didn't stop several Auburn players from lobbying for votes in the postgame media room.

"All the writers, I hope you push for us," quarterback Jason Campbell said. "People don't know how hard it is to go 13-0. They have no idea."

It was the second time in school history that the Tigers finished the season unbeaten but didn't win the national championship. In 1993 Auburn finished 11-0 but was bowl ineligible because of previous NCAA violations.

The only real explanation as to why the Tigers didn't finish higher in the voting was their No. 17 spot in the preseason poll. USC and Oklahoma started the season No. 1 and 2, respectively.

But none of that mattered late Monday night. Years from now, when the 2004 Auburn football team looks back on its season and remembers the Sugar Bowl, it'll see it as the night it placed the final piece in their national championship puzzle.

No matter what the voters say.

"I'm not going to sit here and say we're No. 2 behind anybody," Campbell said. "And I never will."