PASADENA, Calif. -- Vince Young did more Wednesday night than slay the USC dragon, more than deliver a 467-yard rebuttal to the Heisman voters, and even more than single-handedly carry the Texas Longhorns to the school's first national championship in 35 years. 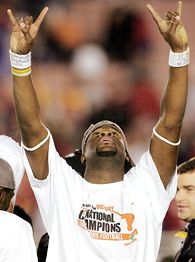 With the dramatic 41-38 victory in the BCS Championship Game, Young made himself into a genuine Texas hero. From El Paso to Tyler, from Amarillo to Harlingen, from the Big Bend to Big D: No matter where the town, Young is the toast of it.

Young ran for 200 yards and threw for 267, completing 30-of-40 passes with a motion that still makes NFL scouts reach for their Rolaids. But even the pickiest of scouts knows how to read a scoreboard.

With the Longhorns trailing 38-26 with 6:42 to play, Young drove Texas to two touchdowns, closing out the drives with freelancing touchdown runs of 17 and eight yards. Those touchdowns, like most of his 19 carries, came as a result of his scrambling.

"Any time I see an opening," Young said, "and they make a defensive stop with the secondary, why not take off?"

He makes it sound simple, he makes it look simple, and to him, it probably is simple. That's why Texas is going home with its fourth national championship.

"Vince is truly one of the great competitors to ever play college football," coach Mack Brown said Wednesday night. "He has got a tremendous amount of confidence. He just exudes that confidence."

That confidence steeled the Longhorns during the month leading up to the Rose Bowl, otherwise known as the coronation of King Trojan. USC came into the game with a 34-game winning streak. The star power of having two Heisman Trophy winners in the same backfield made it easy to overshadow Young and the Longhorns. Texas came into the Rose Bowl with a 19-game winning streak and a large chip on its collective shoulder.

"We didn't get respect from the media," Young said. "It wasn't like somebody gave us 12-0. We worked hard for it. We wanted to show the world that we deserved to play in this game. That's what we did."

After a first quarter of jangled nerves in which the Longhorns were lucky to trail only 7-0, Texas settled down. The offense found its rhythm with a no-huddle attack, a scheme the Longhorns used so rarely that USC strong safety Darnell Bing said they barely practiced for it.

"We didn't show it consistently enough that they would have thought we would use it," Brown said. "We used it against Ohio State. We used it to jump-start at Texas Tech. It was getting loud. One of the great things with the no huddle is that there's no snap count."

The results were immediate and consistent throughout the game. Center Lyle Sendlein said, "When we are in no-huddle, they've got to be in their stance all the time. They have to be ready. In the fourth quarter, they were tired."

That's when Young took back the game. USC had scored touchdowns on four consecutive possessions, turning a 16-10 halftime deficit into a 38-26 advantage.

Young drove Texas 69 yards in eight plays, scoring from 17 yards out on a play he created simply by reversing field.

When the Texas defense stuffed LenDale White for a gain of one on fourth-and-2 at the Texas 45, Young came back onto the field with 2:09 to play and two timeouts.

Never has a fait been so accompli.

"We knew when we got Vince the ball back," strong safety Michael Huff said, "it was over."

As tough questions go, that one isn't exactly going to end up on the SAT.

Take the play that won the game, called 928 Sneak.

"I went through my progressions and no one was open," Young said. "I saw the defensive end inside, so I took off with it."

The end, USC senior Frostee Rucker, had to cover tailback Selvin Young, who came up inside. Once Rucker hit Selvin Young, he couldn't get back outside quickly enough. Rucker dived at Vince Young's feet in vain. Young stepped inside the right pylon and disappeared into a mass of people on the sideline. When he reappeared, walking toward the Texas bench, the ball was tucked against his left rib cage.

"We didn't tackle well," Rucker said. "Hats off to them. We didn't understand how big and strong the guy really is. When you see a guy standing eye-to-eye to you, and he weighs just as much as you weigh, he poses a threat."

The touchdown, with 19 seconds to play, signaled the end of one era in college football and the arrival of another. It is Texas that has the nation's longest winning streak at 20 games. It is Texas that surely will begin next season as No. 1, assuming that Young sticks to what he has said for weeks and ignores the NFL to come back for his senior season.

Young said Wednesday night that he will sit down with his family shortly and discuss the NFL. Texas would forgive him if he left. It will forgive him anything. He brought the championship back to the Forty Acres. Young made Texas No. 1.