Twelve-year-old Nikolette Harris' favorite sport is soccer. Her favorite college is Oregon State. But as the little girl lays in a Portland, Ore., intensive care unit, fighting leukemia for a third time, her likes and dislikes are quickly starting to change.

That's because of the swell of support she's receiving from college football fans across the country. 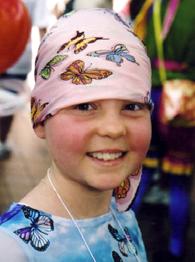 Nikolette suffers from acute lymphoblastic leukemia, the most common cancer found in children. According to the National Cancer Institute, 80 percent of children afflicted with ALL will recover from the disease. But Nikolette has already done this. Twice.

Problem is, Nikolette's body has grown resistant to chemotherapy treatments and she needs a life-saving bone marrow transplant. But the cost to her family -- after insurance -- is expected to top $125,000.

"That's where the fundraising comes into play," said Marc Harris, Nikolette's father. "We have to find some way to pay for this."

Her family has started a Web site. Her middle school has hosted crafts sales, bake sales. And at her former elementary school, the Nickels for Nikolette campaign has brought in more than $2,000.

But that's nothing compared to what's happening on college football message boards across the country. In a place where most fans gather to complain about play calls, gripe about coaches, gossip about recruiting and trash upcoming opponents, fans have gathered to try and help save a little girl's life.

It all started on the Oregon message board, EDuck.com, where Susan Flad, a longtime Ducks fan, posted a message explaining Nikolette's story and asking for donations. Flad's mother, Betty Holden, was an instructional assistant at Nikolette's elementary school, watching up close as the child battled leukemia as a first- and third-grader.

"I still remember my Mom talking to me [about her] trying to keep from crying as this third-grader explained what chemo was, why she was bald and everything else," Flad said. "So I wanted to help. When I originally tried to gather donations in my office I got a total of five dollars. So I thought I'd give this a whirl."

The idea took off, with Oregon fans donating more than $4,000 in less than a week. Another fan saw the posting and, with the Ducks scheduled to face Oklahoma in the Pacific Life Holiday Bowl on Dec. 29, challenged Oklahoma fans to beat Oregon's donations. After 14,000 page views and 225 posts on OUInsider.com, Flad said Sooner fans have raised close to $12,000 for Nikolette.

"Their site gets a little more traffic than we do," she explained.

Subsequent requests have been posted on message boards for Auburn, Alabama, Mississippi State, Nebraska and Texas. The word has even spread to Holiday Bowl officials, who have granted the family a 20-second spot during the game to thank the fans of both schools for their donations.

"It's just amazing," Marc Harris said. "Simply amazing. I can't believe all these complete strangers who are helping us out of the kindness of their heart. I can't begin to express my appreciation enough. I never thought something like this could happen."

At a time where most of the conversation surrounding the Holiday Bowl is how 10-1 Oregon got cheated out of a spot in the BCS, few outside of the message board world have any idea how much a core group of Oregon fans are actually grateful that they're going to the Holiday Bowl and playing the Sooners.

"One Sooner fan told me that they remember how generous people were during the Oklahoma City bombing and that this is their turn to give back," Flad said. "It's just heartwarming this time of the year. The family appreciates it."

And a sick little girl in intensive care is starting to gain an appreciation for college football. Especially for Oregon, Oklahoma, Auburn, Mississippi State and the rest of the fan bases that have stepped forward to support her. Each day that Nikolette is up for it, her father prints out the various entries from the guestbook on her Web site, www.curenikolette.org and blows his daughter away with the nationwide support.

Can't wait to see you cheering for the Ducks on the sidelines in a few years. Although, we would gladly take you too. Boomer Sooner

Hi Nikolette!!! We are praying for you and know that God is going to take care of you. War Eagle and Merry Christmas from the Auburn Tigers!!!

Hello Nikolette, I am a Bulldog from Mississippi State and I want you to know that my wife and I are praying for you and your recovery. Please keep the faith!

"She's a ways from college yet," Harris said. "But she's been saying to me now, 'What about Mississippi State? And Alabama? Oklahoma? Oregon?' This has opened her eyes to a whole new world."

Hopefully, it's only the beginning.