College football's postseason bowl games start Tuesday night and run for the next two weeks. But in one important sense, the winners and losers have already been decided.

Give victories to Navy, Virginia Tech and BYU.

Put a checkmark in the loss column next to Missouri, Nevada and Wisconsin.

Those are the outcomes of the bowl travel games.

When bowl bids are given out every year, a team's win-loss record is important, of course. But it isn't the only factor. The selection committees look long and hard at the size of a school's alumni base and the team's fan representation at previous bowl games, too. That's especially true for non-BCS games and bowls that can select an at-large team.

That's why Navy is already in the win column, even though the Midshipmen don't play until Thursday night in the San Diego County Credit Union Poinsettia Bowl. 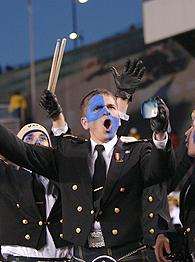 Because it is an independent, Navy doesn't have a guaranteed bowl tie-in. But in recent years, the Middies' ability to sell tickets has made them an attractive selection whenever they are bowl-eligible. In 2003, Navy fans purchased 25,000 tickets for an EV1.net Houston Bowl matchup against Texas Tech. Last year, 18,000 Navy fans traveled to the Emerald Bowl in San Francisco to see the Midshipmen take on New Mexico. And more than 20,000 will see Navy play a 6-5 Colorado State team in San Diego this year.

"Navy is the darling of the college bowl season," said Gary Cavalli, executive director of the Emerald Bowl, which sold 59 percent of its tickets through the Naval Academy last year.

With a capacity of 34,000, Navy's routinely sold-out home stadium (Navy-Marine Corps Memorial Stadium in Annapolis) holds less than a third of the 107,501 fans who can cram into Ann Arbor's Michigan Stadium. But the number of Navy fans who bought tickets for the Poinsettia Bowl is four times greater than the number of Michigan fans who have purchased tickets for the Wolverines' MasterCard Alamo Bowl meeting with Nebraska in San Antonio.

In fact, Navy has proved to be such a great partner that the Poinsettia Bowl already has extended guaranteed invitations to the Middies to play in its game in 2008, 2009 and 2010, assuming they are eligible.

"We're one of the top travel teams in the country," said Navy's sports information director Scott Strasemeier. "These bowls are like our little BCS championships."

Virginia Tech is another bowl-travel success story, despite a loss to Florida State in the ACC title game that cost the Hokies a berth in a BCS game. The Toyota Gator Bowl might seem like a consolation prize to the team, but Virginia Tech fans have already gobbled up more than 15,000 tickets for the game in Jacksonville.

Last year, the Pioneer PureVision Las Vegas Bowl drew 27,784 fans for a matchup between Wyoming and UCLA. Thanks to the support of BYU fans, who have purchased more than 13,000 tickets for the game against Cal, attendance this year should top that number by more than 10,000. In fact, Thursday night's game is sold out.

Then there's the flip side.

Nevada, for example, likely won't get a lot of consideration for future bowl games based on its fan turnout for the Sheraton Hawaii Bowl on Saturday in Honolulu. Only 100 Wolf Pack fans bought tickets, according to the school's sports information director, Jamie Klund. Bowl officials understand that the long travel distance, combined with the high cost of flights during the holidays, make it a hard game to attend, but still had much higher expectations.

Fortunately for Nevada, the bowl committee does not require the participating schools to sell a specific allotment of tickets, as some bowls do.

Another disappointment is Missouri, which will sell approximately 2,500 tickets to the Independence Bowl. That's the lowest total sold by a Big 12 school since the Independence Bowl's alliance with the conference began in 1998. The Tigers lost three of their last four games, which certainly didn't help ticket sales.

The committee chose Wisconsin, presumably because it will be the last game in head coach Barry Alvarez's career. Wisconsin's inability to sell its entire 12,000-ticket allotment shocked the bowl director Tom Mickle.

Wisconsin senior associate athletic director Vince Sweeney speculated publicly that the Orlando game might be cost prohibitive to some because thousands of Badgers fans made the trip to Hawaii to see the team's final regular season game on Nov. 25. But the lack of sales has surprised Alvarez, nonetheless.

"It's a little frustrating when you see Auburn sell out and ask for more, and we're sitting there a little short," he said.

Wisconsin easily sold out its tickets for Rose Bowl appearances after the 1998 and 1999 seasons, but this will be the fifth straight year in which the school hasn't sold all of its bowl game allotment.

"I hope you don't have to go to the Rose Bowl for people to get excited about going to a bowl game," Alvarez told reporters last week.

This year's numbers could fall below that, which makes the Outback Bowl's selection of Iowa over the Wolverines look more rational. Some questioned the Outback committee's choice of the Hawkeyes, who had the same record as Michigan but lost to the Wolverines during the regular season.

Last week, Michigan head coach Lloyd Carr argued that bowl decisions shouldn't be based on whether the fan base travels.

"The truth is that many of these decisions are based on a team's ability to sell tickets or fill hotel rooms, and that is unacceptable," he said.

When asked to name a team that is a good bet to travel to a lower-tier bowl, FedEx Orange Bowl chief executive Keith Tribble picked South Carolina. "They will sell all their tickets because they finished the season strong," Tribble said.

But despite wins in five of the last six games, including victories over Tennessee and Florida, South Carolina will come up some 4,500 short in sales of its ticket allotment to the Dec. 30 Independence Bowl in Shreveport, La.

For a team to get the most bang for its bowl bucks, it's important to communicate to the fan base that the school gets credit only for sales that come from its allotment. It's a problem sometimes in the hours just after a bowl selection is announced, as impatient fans who want to guarantee their seats don't wait to hear about the school distribution.

That happened to Northwestern this year. Despite an e-mail urging fans to buy through the school, the phones lit up in El Paso just after the news broke that the Wildcats were heading to the Vitalis Sun Bowl to face UCLA.

"Once the matchup was announced, we were inundated by calls coming from Northwestern fans," said Sun Bowl executive director Bernie Olivas. "That meant that, at least initially, they weren't buying from their group of seats."

A school such as Northwestern, with a much smaller enrollment as the only private institution in the Big Ten, needs every advantage it can get in the travel bowl game. In 2000, the Wildcats were conference co-champions, but slipped all the way to the Alamo Bowl partly because every other eligible Big Ten school had a larger alumni base.

Northwestern's athletic director, Mark Murphy, wouldn't say how many of the 8,000 allotted Sun Bowl tickets the school would sell this year, other than that things were going "fairly well."

Because the number of tickets sold is so important, some schools are trying creative ways to boost numbers. Rutgers, for example, is headed to the Insight Bowl to play Arizona State on Dec. 27, its first bowl game in 27 years. To entice students to make the trip to Phoenix, the school offered them free tickets, and 350 of them accepted. In addition, the state of New Jersey and Rutgers alumni will randomly award $300 stipends to 275 student-ticket holders. Airfare from the East Coast to Phoenix around this time of year can't be found for less than $600.

Other schools are encouraging alumni who can't attend games to buy tickets and then donate them, as the team will still get credit for the sale. UTEP had no problem selling more than 17,000 tickets to last year's Houston Bowl, but the number will be significantly less for the Miners' GMAC Bowl in Mobile against Toledo. The enticement? Donate two tickets and receive a commemorative bowl ticket signed by head coach Mike Price. Donate four tickets and Price will sign a bowl media guide.

Geography, in relation to a school's fan base, is one of the factors in the bowl travel game.

Texas Tech has sold more than 17,000 tickets to the AT&T Cotton Bowl against Alabama, but is Texas Tech a great travel team? It's difficult to know. The game is a relatively close -- 345 miles away in Dallas. Last year, North Carolina sent more than 30,000 people to the Continental Tire Bowl and this year, North Carolina State will send more than 20,000 people to the Meineke Car Care Bowl. But Charlotte was the site of both games, making it an easy drive for fans.

The opposite sometimes holds true when teams play far from home. BYU, entering its first bowl since 2001, might have been an attractive option for the Las Vegas Bowl because so many Mormons live in the area. But in 1999, when BYU played in the Motor City Bowl in Detroit against Marshall, so few fans traveled to the game that the school ate $413,536 from unsold tickets.

The Motor City Bowl survives thanks to the fact that "it's a tank of gas to whoever comes here from the MAC," said Ken Hoffman, the bowl's executive director. Faced with an at-large choice to go up against Akron this year, Hoffman chose Memphis ahead of Southern Miss, Nevada and New Mexico, in part because Tigers' fans would have the shortest distance to travel to the game.

"With airplane ticket prices being higher and the airlines running fewer flights, more and more people either want to drive or sit down in front of their TV or watch a game at a bar," said Tom Starr, executive director of the Fort Worth Bowl.

Starr, whose game had the eighth selection from the Big 12, lucked out this year when Kansas beat Iowa State in overtime in the last game of the season to qualify for a bowl. The Jayhawks have a large alumni base in the Dallas-Fort Worth area, and the drive from Lawrence, Kan., is only eight hours.

The bowl then decided to give its at-large berth to Houston, an instate team whose head coach and quarterback, Art Briles and Kevin Kolb, respectively were legends at Stephenville High School, 80 miles away from Fort Worth.

Still, selling tickets to a matchup of two 6-5 teams is a tough task. Each school gets an allotment of 10,000 tickets; thus far, the two have sold barely 10,000 tickets combined.

With 28 bowl games, it seems like there are almost no surefire bets anymore. That is, unless, you have an opportunity to call in the Navy.