There's one about Joe Paterno loosening the reins on offensive coordinator Galen Hall, allowing him more flexibility in play calling. There's one about Paterno's assistants visiting the University of Texas during spring practice to learn the intricacies of the high-powered Longhorn attack. And then there's one about the flexibility dual-threat quarterback Michael Robinson has provided in his first full year as a starter. 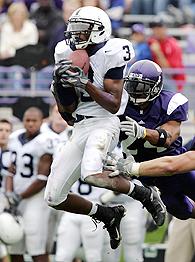 They're all true. They all played a role. But to scrape at the core of what went right, to dig up the root of the Nittany Lion turnaround, one should look no further than the team's weight room last January. There, alongside fifth-year seniors and three-year starters, a pair of all-everything freshman who still should have been in high school lifted weights like a pair of fighting-for-their-lives football walk-ons.

They had yet to put on a Penn State uniform. They had yet to take a single rep in a single practice. Yet Derrick Williams, widely considered the top high schooler in the country, and Justin King, who wasn't far behind, had graduated high school early, enrolled at Penn State and were setting the tone for everyone else. The two kids who had the talent alone to change the fortunes of the Penn State attack had the work ethic to go along with it.

"With recruiting, you never know what you're going to get," offensive coordinator Galen Hall said. "You think you know, but you just don't. And we got lucky. It was 6 a.m. in January and these kids were in there busting their tails.

"They didn't come in here and ask for a thing. They just worked, so unselfishly. They wanted to be part of the group. They wanted to win. You never would have any idea they were the highly-touted recruits that they were."

Said King: "We just wanted to win for these guys. They deserved it."

Williams and King have combined with two other freshmen -- Jordan Norwood and redshirt Deon Butler -- to completely transform the Penn State offense and completely turn around the team's record. A team that could only muster a pair of safeties in a 6-4 loss to Iowa in 2004 now averages more than 35 points per game.

The kids have averaged 14 yards a touch. They've accounted for 35 percent of the Nittany Lions' total offense and 35 percent of their touchdowns. Nine of Penn State's 14 plays of 40 yards or more have come at the hands of a freshman, equaling the team total for 2003 (six) and 2004 (three).

Oh, and a team that a year ago couldn't have paid its way to a bowl game will face Florida State in prime time Tuesday in the FedEx Orange Bowl.

"Anytime your players go out and make plays, you're a much better, smarter football coach than when they don't make plays," Hall said. "Everyone thinks something magical happened this season. We just had some playmakers that came through for us." 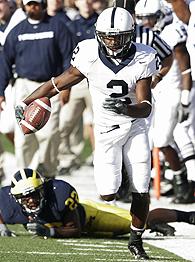 Playmakers who Hall hopes can continue their success Tuesday against the Seminoles. The team will likely be without Williams, who broke his arm against Michigan and is unlikely to play. But he's been on the practice field all week hoping to make the decision difficult.

"I think he can play. He thinks he can play. But that's up to the coaches," King said. "The type of player he is, he's not going to stop asking."

It's that never-ending hunger that pushed the entire group this past offseason. Williams, King and Norwood all graduated high school early, getting a jumpstart on the college football lifestyle both on the practice field and in the classroom. In the summer, the receivers spent four days a week working with quarterback Robinson -- a former receiver -- on everything from footwork to timing.

"It wasn't always throwing to them," Robinson said. "I'd put the ball down, put the receivers gloves on and go out there and run with them. And they responded to that. They soaked it all in. These kids, they all know how to win. And they brought that attitude to our football team."

They also learned from one another. The bitterness and jealousy and unhealthy competition that could have split the group apart never materialized. Butler, a former walk-on on the defensive side of the ball who became the team's leading receiver in 2005, credits the highly-touted freshmen for much of his success.

From Norwood, the son of Penn State defensive backs coach Brian Norwood, Butler learned how to cut so he could set defensive backs up. From Williams, he picked up how to fake defensive backs with his head. And from King, who has also spent time on the defensive side of the ball, there was the ability to find the soft spot in a zone. 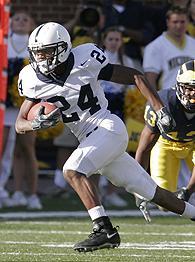 "Nobody feels any seniority, nobody feels like they're better than anybody else or anything like that," Butler said. "We're a team. A family. And we learn from one another and help each other out."

Whatever they're doing, it's working. And Penn State, a place long known for its old-fashioned coach, old-fashioned uniforms and old-fashioned play calling, a place where a true freshman had little chance to see the field, never mind make an impact, is becoming hip.

King and Williams, now roommates, regularly work the communication lines, spreading the gospel about the Penn State program to recruits and hosting Xbox 360 tournaments when they come to town. It's working. Much like USC, which went from dead and dormant to the must-see program a few years ago, Penn State's recruiting future is blindingly bright. It's suddenly becoming the place to be.

To a certain extent, Joe Paterno has his hard-working freshmen to thank, whether the kids are willing to take the credit or not.

"Penn State already had great people," King said. "There were already great players. They just needed to add a few pieces to the puzzle."