FORT LAUDERDALE, Fla. -- The four Penn State football players sat in an off-campus apartment that summer afternoon, sharing the stories of who they were, where they were from and what life was like before they arrived in Happy Valley. 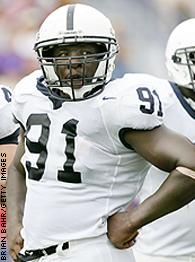 It was one of those moments that builds football teams, that creates lifelong bonds. Only this time, it was a little bit different.

Michael Robinson, Matthew Rice and Alan Zemaitis had already shared when Tamba Hali began to speak and everyone's jaw fell to the floor. They knew he was from Liberia, where there had been a decade-long civil war where thousands of his countrymen had been killed.

But they didn't know Hali knew gunfire from the age of 8. They didn't realize his family spent much of his childhood jumping from village to village, hiding for six months at a time to avoid packs of gun-wielding soldiers. They didn't know he had witnessed cousins getting shot, close friends getting stabbed and complete strangers getting lined up and sprayed with bullets.

They had no idea he hadn't seen his mother in a decade. And they couldn't picture the 6-foot-3, 232-pound defensive end crumbling to the floor in horror the first time he heard a commercial airplane fly above him in the United States.

They couldn't truly grasp any of it. So they just listened. In silence.

"I'll never forget it," Rice said. "It seems like it was yesterday. Anybody else and you would have said he was lying. But not Tamba. He's not that way. He's so truthful. So from that point, we saw him in a whole different light. He didn't remind us of this guy or act like that guy. He was just Tamba.

"Tamba is just Tamba. And nobody commands more respect on this team."

So it should be no surprise then that the kid who grew up wanting to be a basketball player and had never heard of a bowl game until he showed up at Penn State turned out to be the emotional heartbeat of the Nittany Lions. It should be no surprise that the emotions will likely be flowing Tuesday night, when the senior defensive end plays his last game for the Blue and White in the FedEx Orange Bowl (8 ET, ABC).

"I'm the one who keeps reminding everybody," Hali said. "Four games left, three games left. And now there's only one."

Hali's leadership role with the Nittany Lions couldn't be better explained than with one of head coach Joe Paterno's favorite anecdotes. As the story goes, Paterno gathered his team together a few years ago instructing several of his players to get haircuts. Everyone except for Hali, who Paterno had recruited with his Mohawk-like mop and accepted it. So the next day, who was the first Penn State player to show up with a haircut?

The one who was told he didn't have to get one, Hali.

"I sort of felt like I was the leader for the long hair thing," Hali said. "Coach wasn't going to tell me to cut it, so I thought I would take the burden off me and cut it for him. And the other guys sort of followed."

They always have at Penn State. How could they not, considering what Hali has gone through? When he was 10, he and his sister and two older half-brothers fled Liberia to live in New Jersey with their father Henry Hali, a man they barely knew. Henry, who never married Tamba's mother, Rachel Keita, came to the U.S. in 1985 when Tamba was 2. He became a U.S. citizen in 1992 and two years later, brought over his children. U.S. immigration laws kept Keita behind.

During the war, Tamba could speak to his mother only every six months or so. The family would write her a note, give her a date and time to be at a specific land-line phone and would call. Sometimes it worked, sometimes it didn't.

Since the war ended in 2003, Henry Hali sent Keita a cell phone so she can talk to her children more frequently. Tamba last talked to his mother on Christmas Eve, when he told her he had a big game coming up and to pray for him.

Much like his teammates struggle to understand what life was like back in Liberia, Keita can't grasp what her son is up to in America. She's seen pictures of her son playing football, but has no idea how the game is played. She has no idea how good her son is. Tackles, sacks, touchdowns, first downs, it all means nothing to her.

"She says it looks dangerous," Hali said. "So I just tell her to pray for me."

Tamba himself had to learn the game when he first started playing as a freshman in high school. More familiar with the fast-break style of basketball, the high school lineman had little understanding of scripted plays.

"On just about every play, I'd have to ask the guy next to me what to do," Hali said. "Coach told me, 'Just put your hand on the ground and go hit the guy with the ball.'"

So that's what he did. And is still doing. Hali led the Big Ten with 11 sacks and 17 tackles for loss this year. He also forced a momentous late-game fumble against Ohio State to preserve a 17-10 win over the Buckeyes. Florida State offensive coordinator Jeff Bowden said Saturday that Hali is "as good as any end we've seen this year. If we have trouble up front, it's going to be a long night."

As for his mom, Hali is hoping to see her again soon. He's waiting to take the exam to become a U.S. citizen, after which he'll be able to file the paperwork to bring her to the States. A multimillion-dollar NFL contract should help ease the transition to a new country.

"I just keep her in my prayers, keep the faith and stay positive that something will happen," said Hali, who is on pace to graduate with a degree in broadcast journalism this spring. "It's going to be sooner rather than later. But I'm not going to push it now. My focus is on the game. Afterwards, I'll be able to focus on other things."

Like bringing Mom home, to his side. And his favorite hobby, music. In his free time, Hali uses his love for music and a new software program to create rap songs. Not about getting drunk or chasing women, but about love. One of his more recent songs is an ode to his mother.

"I miss my mother," Hali said.

Anyone can comprehend that.