TEMPE, Ariz. -- Minutes after catching five passes for 124 yards and a touchdown in the Fiesta Bowl, Ohio State wide receiver Santonio Holmes told reporters on the field that he was entering his name into the NFL draft. 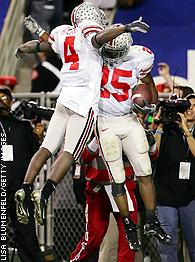 As Holmes was talking, fellow receiver Roy Hall yelled behind him, "You're going to the league!"

Holmes is a fourth-year junior. His announcement after the Buckeyes defeated Notre Dame 34-20 did not seem to come as a surprise to coach Jim Tressel.

"He's a fourth-year guy, well along toward his degree," Tressel said. "I think he's proven that it's time to move along.

Quarterback Troy Smith said, "It's time for him to step up and go to another level."