MIAMI -- Larry Johnson couldn't believe what was happening in front of him. Penalties, turnovers, safeties, missed extra points, fumbled quarterback exchanges on the 4-yard line. It was the strangest game he'd ever seen.

"By far," the Chiefs running back and Penn State alum said. 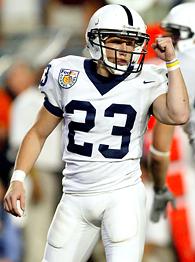 Forty-five minutes and two overtimes after Johnson first thought things were a little bizarre, following the two missed field goals and a pair of touchdowns that sent this instant classic/disaster into a third overtime, an exhausted Johnson, watching alongside fellow alum Ki-Jana Carter on the Nittany Lions sidelines, couldn't take it.

"It's getting out of hand now," he said, laughing. "I'm almost to the point where it's like, 'Just tell me what the final score is. I'm going home.'"

Lucky for Johnson, he stuck around. And after a 38-yard miss by Cismesia, Kelly rebounded to connect from 29 -- on a drive in which coach Joe Paterno was overruled by quarterback Michael Robinson on a fake field goal call -- and the five-hour marathon ended with a 26-23 Penn State victory.

When the madness had finally ceased, Bobby Bowden and Joe Paterno embraced at midfield, their ultimate wish having come true. The story of the 2006 Orange Bowl was no longer about them. After spending the week deflecting the attention from the first meeting between a pair of coaches with over 700 wins, the story had become the chaos that had ensued in one of the strangest, wackiest games either had been a part of.

"I've played in a lot of bizarre games, especially when you get down to missing field goals," Bowden said. "I think when they pick the all-time missed field goals coach, I'll probably win the award. That is weird. Like I say, we're masters at that."

Things didn't get any more normal after the game ended, with Florida State running back Lorenzo Booker insisting that the Seminoles actually didn't lose.

"It might look like an 'L' and sound like an 'L,' but we didn't lose," Booker said. "We gained so much from this game. You can't call it a loss. I refuse to think that we lost."

Booker called the end of the fourth quarter and overtime, "heart-pumping. Something you love to watch but hate to be a part of." Florida State quarterback Drew Weatherford described it as, "emotionally draining." Penn State receiver Ethan Kilmer said it was "nerve-racking."

However you describe it, it was a fitting end to a strange night. Both Paterno and Bowden spent much of their postgame discussions showering praise on a game that was "hard fought" and "nobody deserved to lose." But missed tackles, dropped passes and a seemingly endless array of penalties -- 21 between the two teams, not including several that were overturned -- set the tone.

Florida State failed to move the ball for much of the first half, but scored two touchdowns in a span of 1:20 -- one on an 87-yard punt return by Willie Reid and another on a 57-yard reception by Booker -- to take the lead. But on the Booker touchdown, Cismesia missed the extra point, his first miss in his last 45 attempts. The 'Noles could have avoided overtime with that one point. 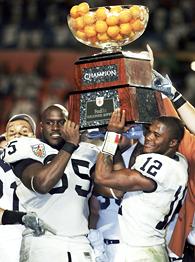 Later in the first half, with Florida State pinned on its own 2 and with less than a minute left, Paterno refused to let the clock run out, burning three timeouts to get his offense the ball back with 17 seconds. Two plays later, Robinson hit Kilmer in the corner of the end zone for a 24-yard touchdown and a 14-13 Penn State lead.

After a third quarter that saw nothing but punters (the two teams combined for 20 punts, most in an Orange Bowl since 1947), Penn State coaxed Florida State quarterback into an intentional grounding penalty in the end zone, resulting in a safety.

"It's my fault," Weatherford said afterward. "I was real mediocre tonight. If I would have played better, we would have won."

Penn State took the ensuing possession all the way down to the Florida State 4-yard-line, drawing daringly close to putting the outcome out-of-reach, when Robinson fumbled the exchange with center E.Z. Smith and Florida State recovered.

With 4:08 left in the game, Cismesia drilled a 48-yarder to tie the game at 16. But Robinson led Penn State all the way down the field in the final minutes, only to watch Kelly miss a 29-yarder with 32 seconds left.

"I had my plant foot up a little too high and I pushed it," Kelly said. "It wasn't like I felt the pressure or anything like that. It was just poor execution."

After returning to the Penn State sidelines after the miss, Kelly's teammates patted him on the shoulder, tapped him on the top of his helmet and told him not to worry about it. They were going to need him in overtime. And they did. Twenty minutes later, Kelly repeated the same error, pushing another potential game-winner to the left, this one from 38 yards.

In the third overtime, Cisemesia missed a 38-yarder of his own, giving Kelly yet another life. But on third-and-2 from the Florida State 17, Paterno called for a fake field goal. Robinson talked the 79-year-old out of it.

"Coach and I had it out a little bit," Robinson said.

"He was griping to me," Paterno said. "And we didn't get the lineup we were going to get. So we called it off."

After a timeout, Robinson sneaked it for a first down and Austin Scott carried it a yard to the right to set up another chance for Kelly from 29 yards. This time, he made it.

For the 77,000 in attendance, including Larry Johnson, it was relief. A final outcome. And for Kevin Kelly, it was a dream come true. Sort of.

"You always dream about making the game-winning kick in a setting like this, with everyone watching you and all the pressure on," Kelly said. "But you don't dream of missing the first two to get you there. Nobody does."