PASADENA, Calif. -- Reggie Bush somersaulted into the end zone, his future as the likely No. 1 NFL draft pick ahead of him and his bid for a record third consecutive national championship yet to be dashed. 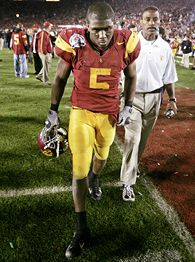 Then there was his running mate, LenDale White.

Overshadowed by Bush for much of the season, White had a breakout game in the Rose Bowl, scoring three touchdowns in the duo's run to history. The two combined for 99 career touchdowns in three years, breaking the record of 97 set by Army's Glenn Davis and Felix "Doc" Blanchard from 1943-46.

Despite their efforts, top-ranked Southern California had its 34-game winning streak snapped in a 41-38 loss to No. 2 Texas on Wednesday night.

"Everybody can't win all the time," White said. "They came out and played a great game. We can't take that away."

After the game, Bush alluded to his imminent departure for the NFL.

"Even with me leaving, I definitely expect them to come back for the national championship," he said.

As always, Bush made amazing moves. This time, though, White topped him statistically.

"He's the Heisman," Young said. "All hats off to him. He's a phenomenal athlete."

At one point, Bush left reporters and sought out Young in the Texas locker room for a handshake.

"That's a matter of respect from a great guy with great character," Young said.

Longhorns coach Mack Brown got Bush aside near the Texas locker room and told him, "I thought it was a classy game. Nobody could stop anybody."

Bush embellished his reputation as college football's most explosive player in the fourth quarter with his sideline-hugging sprint and ensuing somersault in which his helmet smacked the turf in the end zone.

Not everything was picture perfect for the two friends, however.

USC led 7-0 on White's first TD run, Bush had the ball and another score appeared imminent.

But suddenly, inexplicably, he tried to lateral to a teammate who hadn't touched the ball all season.

Bush's flashy 37-yard run on a screen pass from Leinart carried him inside the 20-yard line, where his lateral intended for Brad Walker went haywire. Safety Michael Huff recovered at the 19-yard line for Texas early in the second quarter.

"Reggie just tried too hard on that play and he'll regret it forever," USC coach Pete Carroll said. "Reggie was just trying to get a TD."

Bush clapped his gloved hands to his helmet in dismay and ran off the field. He was crouched alone on the sideline when Leinart came over and gave a consoling tap on Bush's helmet.

The Longhorns capitalized on Bush's mistake with a 46-yard field goal by David Pino to trail 7-3.

Bush's blunder could have proven colossal for the Trojans, who trailed 16-10 at halftime in the matchup of two unbeaten teams.

White eased the sting with two straight touchdowns in the third quarter -- bulldozing between tackles on the second -- that gave the Trojans a 24-23 lead and set up his potential bid to win the Heisman next season.

Then Bush scored his first TD of the game and extended USC's lead to 30-23. Back on the sideline, he kissed his right glove and pointed toward the night sky.

Things took a turn for the worse with 2:09 remaining and USC ahead 38-33, when White fell inches short of a first down -- a play that would ultimately allow Texas to take the title.

"It's been a great run," Bush said. "We've done some special things. I don't think we should be ashamed about anything."

Whether these shooting stars add to their career touchdown total remains to be seen. The NFL beckons, and Bush and White are expected to announce their future plans soon.