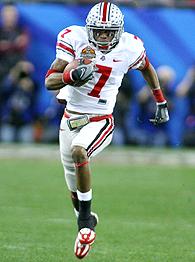 But the fast start for Ginn and the Buckeyes took a sudden turn in the wrong direction. While the scarlet and gray portion of the crowd erupted, Ginn hurt his left foot. The injury happened during the post-play celebration in the end zone, Ginn said.

Ginn, the Buckeyes' top game-breaking threat, hobbled off the field and eventually went into Ohio State's locker room. He tried to return to action, testing the ankle while running up the OSU sideline, but said it just kept getting worse.

"It was really frustrating," Ginn said with his head down, as a big protective boot sat by his leg. "I know I hurt it on the celebration, but I really don't know exactly how."

Without Ginn, the Buckeyes' offense didn't just sputter, it fell flat on its face. Heisman winner Troy Smith, who came into the game with a rep as a huge big-game player, had a dismal night, going 4-of-14 with one interception for just 35 yards while getting sacked five times.

When informed of Smith's paltry numbers, Gators cornerback Ryan Smith looked stunned. "I had no clue," he told reporters. "Are you serious? That's amazing to me."

"It was really frustrating. I know I hurt it on the celebration, but I really don't know exactly how."
-- Ted Ginn Jr.

However, Florida players dismissed any talk about the absence of Ginn's speed being much of a factor in the overall outcome. "We were really more concerned with [Anthony] Gonzalez," said UF strong safety Tony Joiner.

Gators linebacker Earl Everett knew OSU was in trouble right after the Buckeyes' first drive. Florida's defensive ends came off the field giddy over their matchup with the Buckeyes' offensive tackles. "[Derrick Harvey and Jarvis Moss] said, 'They can't block us,'" Everett said. 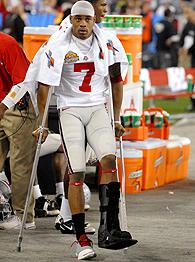 Ginn disagreed when told of the Gators' comments. "It's all an opinion," he said softly. "I think it would've been a different ball game."

Ginn's record return was actually a product, in part, of one of the Gators' few mistakes on the night. The Gators' kickoff man, Joey Ijjas, was supposed to boot the ball into the deep left. Instead, he sent it to the deep right.

After the game, Ginn sidestepped speculation that this would be his last game for Ohio State. He said he would decide in the next few days whether he bolts Columbus early for the NFL draft. For now, it was tough enough dealing with the loss. Seeing his childhood buddy Smith end his career this way was worse.

Asked whether he'd ever seen Smith have such a bad game, Ginn paused a moment, then shook his head.

"First time for everything," he said. "Never seen a guy return a kickoff for a touchdown and get injured either, though."

Bruce Feldman is a senior writer with ESPN The Magazine.