PARADISE VALLEY, Ariz. -- What Ohio State junior tailback Antonio Pittman needs is not more speed, or more ability to break tackles or, even if he does share the job with freshman Chris "Beanie" Wells, more carries.

What he needs is more publicity. Rarely has the position that has produced six Heisman Trophy winners at Ohio State -- six! -- been coated in such anonymity. It is a little-known fact outside of the Woody Hayes Center, but Pittman rushed for 1,171 yards and 13 touchdowns this season.

In 2005, when he didn't share the job with Wells, his fellow Akron native, Pittman rushed for 1,331 yards and seven touchdowns. He is one of only five Ohio State players ever to rush for 1,000 yards in consecutive seasons. 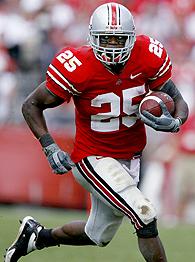 The 5-foot-11, 195-pound Pittman runs so fast, he doesn't leave footprints. There is no record of him in the 59-page booklet of newspaper and Internet stories that the Ohio State athletic department printed up. Pittman gets so little attention, he might as well play for Ohio Wesleyan.

"Like I say," Pittman said Wednesday, "there's only one ball on the field. On an offense that has that many great players, with me and Beanie both there, we just try to make the most of our backfield."

On an offense with Heisman winner Troy Smith at quarterback and All-Big Ten wide receivers Ted Ginn Jr. and Anthony Gonzalez, it is difficult to get attention. It just so happens that Pittman made an all-conference team, too: the one selected by the coaches, not the media.

That's some testimonial. So is this: If Ohio State still ran the traditional 3-yards-and-a-cloud-of-dust offense, Ginn said Wednesday of Pittman, "I think he would have 2,000 yards rushing."

Pittman has been written about in the last 12 months. Before the season, there were all kinds of stories in the Ohio papers about whether he would hang on to his job.

"It might come off strange to y'all, but since I've been here I've been starting, and someone is going to take my spot," Pittman said with a smile. "Honestly, I'm the only starter in America whose job isn't secure at the beginning of the year. That's just something I've learned to deal with since I've been here. I'm always the guy who is there until the next man gets here."

You want to produce a scowl on offensive coordinator Jim Bollman's face, bring up that issue.

"Do people understand why I was [defensive] now?" Bollman asked. "Part of the success of our football team is the attitude of those guys being able to share in what's going on, to sacrifice for the good of the whole deal. Any of them could say, 'I could catch more,' or whatever. When all those guys have come together about not caring who gets the ball, we're better off."

His ability to laugh at such a slight is a sign of his maturity, as is his willingness to tutor his homeboy Wells, the freshman who rushed for 567 yards and seven touchdowns this season. But Pittman has been mature from way back. He was so determined at Akron Buchtel High to get to Columbus that he graduated early and enrolled at Ohio State in time to participate in spring practice.

Pittman benefited from the Play It Smart program funded by the National Football Foundation, which places an "academic coach" on a high school coaching staff and teaches the players to equate academic preparation with game preparation. His academic coach at Buchtel, LaLisa Anthony, remains close to him.

"One thing that I admire about him," said Anthony, now a regional supervisor of the Play It Smart program, "is I don't ever recall seeing him with his head dropped. That's very important to me. So often our young people are beat up emotionally. Tony is proud of who he is. He's definitely an inspiring young man."

"I see them running against good guys. They don't go down on the first contact. I see them driving their legs, trying to get more yards. That's what good backs do."
-- Florida linebacker Brandon Siler

A few people understand how good Pittman is.

"I see them running against good guys. They don't go down on the first contact," Florida linebacker Brandon Siler said of Pittman and Wells. "I see them driving their legs, trying to get more yards. That's what good backs do."

Someone in the NFL has been watching Pittman, too. He has petitioned the NFL to see where he might be drafted, should he choose to make himself eligible in April. The result, which he chose not to share Wednesday, is such that he says he will have a decision to make after the Florida game.

Getting to college early worked well for him. Maybe getting to the NFL early would, too. Pittman has rushed for 2,883 yards in his Buckeyes career, already the eighth-highest total in school history. If he returns next season, he will need fewer than 900 yards to surpass Eddie George's total of 3,768 yards and move into second place (Archie Griffin, with 5,589 yards, is as uncatchable in retirement as he was in scarlet and gray).

Whether he stays or goes, Pittman will get some attention. It's about time.