PARADISE VALLEY, Ariz. -- You don't have to spend much time around the Ohio State Buckeyes to learn of the importance that coach Jim Tressel places on special teams. If Ohio State had a yard for every Buckeye player or coach who solemnly, straight-facedly said, "The punt is the most important play in football," they'd never have to punt again.

Whether it is true or not is a subject for debate -- and the Buckeyes make a compelling case for it -- but the overriding point is that no coach puts more into the special teams than does Tressel. The results over his six seasons in Columbus vouch for his dedication.

In 2003, B.J Sander won the Ray Guy Award as the best punter in the nation.

In 2004, his second season as an All-American, Mike Nugent won the Lou Groza Award as the best kicker in the nation. More important, his teammates named him a captain, the first kicker in nearly 30 years to be so honored. 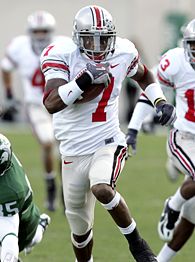 You could look at a typical Ohio State practice schedule, in which as many as seven of the 24 five-minute periods in a two-hour practice are devoted to the kicking game.

You could have looked at the Buckeye sideline a year ago. Corner Malcolm Jenkins no longer remembers the game. Someone asked Jenkins if he had ever seen the imperturbable Tressel lose his cool.

"I was a punt return guy," Jenkins said, "and the punter shanked it. I didn't run off the field to get away from it. That's the maddest he's ever gotten.  I knew then it (special teams) was just as serious as offense and defense."

You could stick your head in a kicking review meeting on a Friday afternoon before a game. The first sign that you will see in the meeting room is, "Special Units Win Championships." Tressel will be running the meeting.

"It's not like he jumps in on Friday afternoon," said Tressel's brother Dick, the Ohio State running backs coach. "There is a consistency that establishes the fact.  It comes from the top down. The head coach is there. He has the clock on the kicker every kick. He's in every special teams meeting. There is no question. It's been that way all week."

Even if the head coach never said a word, his attention would convey the message.

"Sometimes I think that kids are smart," Dick Tressel said. "They know whether you are serious about those practice reps or you've [just] got them in your practice schedule. I think it's pretty apparent on our practice field that we're serious and not just spinning your wheels and getting onto the next thing."

Jim Tressel said he doesn't know who taught him the importance of special teams. He credits his father Lee, an Ohio coaching legend, as the genesis of his football knowledge. He believes the difference today is that more is being talked and said about the kicking game.

"The things that were talked about just within the meeting rooms and the coaching staff rooms are being talked about all over the place," Jim Tressel said.

No one talks about them like the Ohio State head coach. Quarterback coach Joe Daniels, is in his 43rd season with a whistle around his neck.

"He always says, 'The punt is the most important play in football,'" Daniels said of Jim Tressel, "and that's true when you think about it. He was the first person ever to use that that I have heard. You know what? He's right."

And why, exactly, is the punt the most important play in football? Ask the experts.

"He always stresses that it's a one-play series," Ohio State deep snapper Drew Norman said. "No play in football covers the ground that a special-teams play does. It's such a field-position advantage. If you can force a turnover or score, it's demoralizing."

Asked Daniels, "What's more devastating than having a punt blocked or having someone return a punt on you?"

Added senior corner Antonio Smith, "As my career went on, practices and games went on, you definitely see how a punt can change the phase of a game."

And there is the bottom-line emphasis of kicker Aaron Pettrey.

"He wins games," Pettrey said, "so he must know something."