GLENDALE, Ariz. -- The Florida Gators came to the Tostitos BCS National Championship Game with a 12-1 record and a legion of doubters. Florida hadn't dominated teams the way Ohio State had. Florida hadn't scored points the way Ohio State had. Coach Urban Meyer's earnest lobbying just to get the Gators an invitation proved that if his career faltered, he could move to K Street in Washington and make a good living.

Gucci loafers and $2,000 suits will have to wait. What Meyer proved Monday night is that he is a national championship football coach.

Florida 41, Ohio State 14 is not a mistake. If it's at all inaccurate, it's because the game was not as close as the score indicated. If you went to bed early Monday night, you saw the whole game anyway. 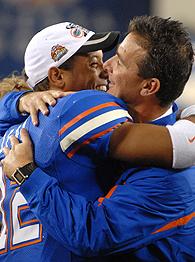 When Ohio State junior Ted Ginn Jr. took the opening kickoff 93 yards for a touchdown, it looked as if the rout was on. Instead, Ginn merely delayed the rout for 16 seconds.

Buckeyes quarterback Troy Smith, looking to put a crowning flourish on his rise to stardom, instead played as if weighed down by a Heisman Trophy. The senior completed four passes, or one less completion than times he was sacked, in 14 attempts for 35 yards and an interception.

Smith joined the panned-theon of Heisman-winning quarterbacks -- Vinny Testaverde, Gino Torretta, Eric Crouch and Jason White -- who have stunk in national championship games. But it was a team effort.

"Florida did do some great things defensively, but not nothing that we couldn't have handled," Smith said. "And I have to take all the blame in the world for that."

Ohio State, a team that had won nine games by at least three touchdowns, finished with 82 total yards and eight first downs, totals that Florida surpassed in the first quarter.

Even Meyer, obsessive about saying the right thing, let down his guard when he saw those numbers. 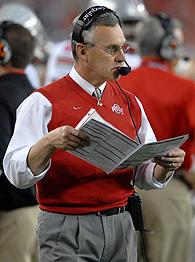 The Buckeyes came into the Valley of the Sun with a 12-0 record, bidding to become the greatest team ever at a school where that title is not thrown around lightly. Instead, the Buckeyes will spend Tuesday, Wednesday and the rest of their lives wondering how to explain an egg simultaneously laid by 121 players, nine assistants and one head coach.

"I think when you look around the locker room," fullback Stan White Jr. said, "there's definitely a feeling of shell shock. In five years at Ohio State and four years of high school, I have never been part of a loss this shocking. No one really has an answer right now."

"We played a lot better teams than Ohio State this year," Moss said, a piece of blue confetti sweat-stuck to his neck. "I can name four or five teams in the SEC that would compete real well against them."

Meyer arrived in Gainesville two years ago with an unorthodox spread offense and a fiery will. He weathered the skepticism of the SEC. Meyer proved you don't have to run the ball in the conventional tailback-find-a-crease way to win in the SEC and to win the national championship. That may be another reason that Woody Hayes is tearing up St. Peter's yardsticks as we speak. The late Ohio State coach, if he watched the game, saw a total collapse by both the offense and defense.

"To come out here, as hard as we worked, to get blown out, is embarrassing to ourselves, our school and everyone else," tailback Antonio Pittman said. After rushing for 62 yards and a touchdown on 10 carries, Pittman is one of the few Buckeyes who could hold his head up, if he chose.

Hayes would be as appalled by the Buckeyes' play as their current coach surely is. After experiencing the worst loss of his six seasons at Ohio State, Jim Tressel said, "When you look at what transpired in the game, it's not surprising that the score ended up the way it did." 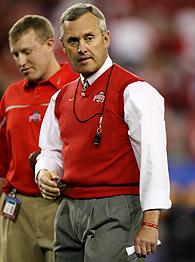 Count Tressel among the Buckeyes who didn't perform well. His decision to attempt to convert a fourth-and-1 at the Ohio State 29 while trailing 24-14 late in the second quarter smacked of desperation. When the Gators' defensive line surged forward and smacked down 225-pound tailback Chris Wells at the line of scrimmage, momentum donned orange and blue for the rest of the night.

"It ended up being the wrong call, obviously," a subdued Tressel said after the game, one of the few times he was spot-on all night.

In the first 11 games of the season, Ohio State allowed 86 points. In the last two, against Michigan and Florida, the Buckeyes gave up 80. You can't blame the Ohio State defense. The Gators started five possessions on Ohio State's side of the field, and converted them into four touchdowns and a field goal.

One week after Boise State's playbook-emptying upset of Oklahoma in the Fiesta Bowl, there would be no such thrills on this field Monday night.

The trademark of Ohio State football under Tressel has been its ability to not beat itself. The Buckeyes commit few penalties and few turnovers and force the opponent to do the same in order to win. Who knew Ginn's return would be the last play that Ohio State played like Ohio State?

• On the ensuing kickoff, kicker Aaron Pettrey committed a face-mask personal foul that gave the Gators the ball on the Ohio State 46. Florida needed seven plays to score on a 14-yard pass from Chris Leak to Dallas Baker and tie the game.

• On the Buckeyes' initial third down, Harvey sacked Smith from behind to force a punt.

• On the punt, linebacker Larry Grant committed a blatant late hit, and the personal foul gave the Gators the ball on the Ohio State 34. Florida scored in five plays this time, with Leak pitching to freshman Percy Harvin.

• On and on and on. Brick by brick, Ohio State removed the foundation on which it had built a season.

• Harvey sacked Smith again on the next possession, and two plays later the Heisman winner hurried a throw that Reggie Lewis picked off at the Florida 29.

The Ohio State offensive line that had allowed only 14 sacks all season gave up five to the Gators.

"When they build a lead, they can then dictate to us what we're going to do," Ohio State center Doug Datish said. "We were coming from behind, and anytime you allow guys, especially with that type of speed, to pin their ears back and not have any reads, it's tough."

And so a son of Ohio coached his way to the national championship. It just happened to be the son who went into exile at Florida. The 42-year-old son from Ashtabula who spent two years at Bowling Green and two years at Utah has now, in his second year at Florida, won it all.

Florida athletic director Jeremy Foley, who has watched his men's basketball team and football team finish No. 1 in a span of nine months, teased Meyer the other night at dinner about how he had yet to last more than two years anywhere.

"Do I have something to worry about?" Foley said.

"I can't wait for my third year," Meyer assured him.

Neither can the fans of the 2006 national champs.