NEW ORLEANS -- The first time Notre Dame faced a defensive line as formidable as LSU's front four this season, quarterback Brady Quinn was pressured so much he turned in one of the worst games of his career.

In a 47-21 loss to Michigan at Notre Dame Stadium on Sept. 16, Quinn threw three interceptions, lost a fumble and was sacked three times. Much of the pressure came from Wolverines defensive tackle Alan Branch and defensive end LaMarr Woodley.

So as Notre Dame coach Charlie Weis prepares the No. 11 Fighting Irish to play No. 4 LSU in Wednesday night's Allstate Sugar Bowl at the Louisiana Superdome, figuring out how to block tackle Glenn Dorsey, end Chase Pittman and the rest of the Tigers defensive line is foremost on his mind. 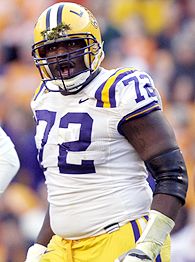 "I think you can't fall asleep on any of those guys on the defensive line," Weis said. "Pittman obviously gets great production coming off the edge. You always have to be concerned with that, but it's not just those two. I think their front four is formidable."

LSU's defensive line is a big reason it ranked No. 2 in the country in total defense (238.8 yards per game) and fourth in scoring defense (12.5 points). The Tigers had an SEC-high 38 sacks, sixth-most in the country, and their starting defense surrendered only 117 points, or fewer than 10 per game.

Dorsey, a 6-foot-2, 299-pound junior from Gonzales, La., is the LSU defensive lineman who is most difficult to block. Dorsey, who grew up wearing leg braces because he was so bowlegged, had started only four games prior to this season. But in 12 games this year, he emerged as one of the most feared defensive lineman in the country, with 59 tackles, three sacks and 8½ tackles for loss.

Dorsey was that productive despite being double-teamed by opponents on nearly every play.

Dorsey was named a first-team All-American by the Associated Press and is comparable to former Tigers defensive tackle Anthony "Booger" McFarland, a former NFL draft first-round pick by the Tampa Bay Buccaneers. Dorsey also might be chosen in the first round if he decides to leave LSU with one season of eligibility remaining.

Dorsey said he won't make his decision until after the Sugar Bowl, but he is expected to enter the draft.

"I have to keep tunnel vision and focus on the task at hand," Dorsey said. "I kind of venture off every once in a while and think about it. But I'm so busy with LSU activities that I really don't have time to think about it. I guess that's a good problem to have."

LSU defensive coordinator Bo Pelini, who is in his second season with the Tigers, isn't sure what Dorsey will do.

"Whether he comes back, I don't know," Pelini said. "I think he has a tough choice ahead of him. He's a tremendous football player and he's had a great year, but there are a lot of factors that go into it. It's an inexact science. He has to talk to a lot of people. He has to get a lot of advice and ultimately sit down with his family, the coaches, get outside opinions and make the choice he thinks is right for him and his family.

"Obviously, we'd love to have Glenn back another year, but that's more of a family decision. But I know Glenn and he's not concerned with that right now. He's concerned with one thing, and that's Notre Dame."

Unfortunately for the Fighting Irish, they have to be concerned about more than Dorsey. Pittman, a senior from Shreveport, La., had 26 tackles and 5½ sacks. Sophomore defensive end Tyson Jackson had 35 tackles and led the Tigers with 8½ sacks. Sophomores Marlon Favorite and Charles Alexander combined for 45 tackles and 4½ sacks at the other tackle spot.

"They're very aggressive," Quinn said. "They're able to get to the quarterback very easily without really having to blitz much, which tells you a lot about their defensive line. They have speed, they have strength, and they also have athleticism.

"Any time you go up against a front four like that, you have to keep in the back of your mind that you have to get the ball out of your hand quick and do some things to nullify the pass rush."

Keeping those defensive linemen away from Quinn will be Notre Dame's toughest task on offense. The Fighting Irish allowed 30 sacks in 12 games this season, which ranked 92nd among 119 Division I-A teams. Quinn was sacked at least once in every game this season and three times or more in six contests.

"They have a good defense," Irish tight end John Carlson said. "They're athletic, they're strong, they're fast and they really swarm the football. We need to execute, obviously. We need to do a lot of things well to be effective."

Notre Dame starts four seniors on the offensive line, all of whom have started at least 25 games in their career. But the unit has struggled none the less. Left tackle Ryan Harris has started 44 games in a row and is considered the Irish's best lineman. Highly regarded tackle Sam Young became the first true freshman to start Notre Dame's opener since 1972 and started all 12 games.

"They're a lot like the UCLA line, they have some talent across the board," Harris said of the LSU defensive line. "They're all very talented and they know their techniques. They're sound in their system, meaning they know where they're supposed to be and they don't make a lot of mistakes. They're a talented group. We've seen talented groups before, and they're definitely toward the top in that category."