NEW ORLEANS -- Brady Quinn broke 36 Notre Dame records during his four seasons as its quarterback. If Quinn leads the No. 11 Fighting Irish to an upset victory over No. 4 LSU in Wednesday night's Allstate Sugar Bowl, he will have won more games than any other Irish quarterback. 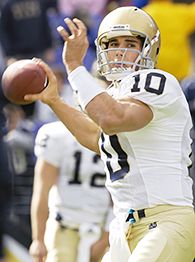 This season, Quinn directed two of the biggest comebacks in the school's storied history -- improbable come-from-behind wins over Michigan State and UCLA -- and helped put Notre Dame back in the national spotlight. He led the Fighting Irish to a second consecutive BCS bowl game and finished third in Heisman Trophy voting.

But Quinn also failed to direct the Irish to victories in two of their biggest games, against Michigan and Southern California, which cost Notre Dame a chance to play for a national championship.

So as Quinn prepares to play his final college football game, even he is beginning to ponder what legacy he'll leave at Notre Dame. He knows that beating the Tigers in the Louisiana Superdome and ending Notre Dame's long drought in bowl games -- the Irish haven't won in the postseason since a 24-21 victory over Texas A&M in the 1994 Cotton Bowl -- would go a long way toward securing his place among the school's greatest players.

"That's one of the things we've been talking about in the locker room, when we have free time together, how sweet it would be to say goodbye to each other with a win," Quinn said. "I think it would be a great way to cap off my career as well as the rest of the senior class.

"We've been through a lot of adversity. There have been a lot of tough times, and when you think about where we started off four years ago to where we would be after winning the Sugar Bowl, it would be a great way to cap things off and hopefully leave this program going in the right direction. It would be huge."

Four years ago, Quinn wondered where he and Notre Dame were headed. He was immediately thrown into the fire as a freshman in 2003, taking over for Carlyle Holiday in the fourth game. While he broke many of the school's freshman passing records, the Fighting Irish finished 5-7 and lost to teams such as Purdue, Boston College and Syracuse. The Irish went 6-6 the following year, and coach Tyrone Willingham was fired after only three seasons.

"I came in here with high hopes," Quinn said. "I mean, they were 10-3 the year before. I'm thinking, 'Hey, we'll be winning a national championship in the next year or so.' Things aren't always going to be easy, but that's part of life."

Things got easier when Notre Dame lured then-New England Patriots offensive coordinator Charlie Weis back to his alma mater as Willingham's replacement. Weis won three Super Bowls with the Patriots and helped transform former sixth-round draft choice Tom Brady of Michigan into a two-time Super Bowl MVP. Weis had a similar effect on Quinn, who might be the No. 1 pick in April's NFL draft.

But during the beginning of the Weis era, Quinn wasn't sure what his future held at Notre Dame.

"When the coach is fired and you have to go through that change, you have to wonder, 'How good are we going to be the next two years? What is going to be my fate?'" Quinn said. "But if you looked down deep inside, you knew this was a good team. We just needed someone to bring it out. Coach Weis and his staff have done that."

Weis has brought out the best in Quinn and the Fighting Irish. Weis has won 19 games since taking over, more than any other Notre Dame coach in his first two years. Under Weis' tutelage, Quinn has developed into the country's most polished passer. The past two seasons, Quinn has completed 64.2 percent of his passes for 7,197 yards with 67 touchdowns and 12 interceptions (one every 73.5 throws).

"He had already been battle-tested for two years by the time I got him because he started a good portion of his freshman year and his whole sophomore year," Weis said. "I already had a good product to work with. Throw on top of that the fact the kid is smart, he's passionate and wants to be great. In my case, I get too much credit for his development because in reality, I already had something special to work with. He is some kind of player. He's special."

Learning to deal with Weis' demanding ways was as important to Quinn's development as mastering the mechanical nuances of the passing game, the quarterback said.

"I'd say it's almost been more psychological than mechanical," Quinn said. "When he first got here, we were working on some mechanical things and technique, but pretty much from the first season on, it's been a lot about defensive schemes and our offense and how you break down different teams and just different situational thinking. It's been a lot of mental things that he's played a big part in as far as my development."

Quinn said Weis, the gruff, demanding and sometimes callous native of New Jersey, was exactly what he needed in a coach.

"Coach Weis is someone who is going to push you to your limits, and he's going to push you past where you think you can go to make sure you're getting better and to get you to reach that next level," Quinn said. "In doing that, I think sometimes obviously he's not going to approach you in a way that you feel is maybe nice or a friendly way."

Even without a national championship and Heisman Trophy, Quinn has left his mark at Notre Dame, and he doesn't regret returning for his senior season.

"It was the right decision for me because I knew I felt comfortable coming into my last game in my college career and being able to graduate and say I've done that," Quinn said. "Everything feels like I've done everything the right way, regardless of how the season has turned out for us.

"Hopefully, what I've done over the last four years, and really what happens in the next game, I'd like to be remembered as the quarterback who helped Notre Dame go from a time when we weren't doing so well and helped turn the program around. At this point, that's all you can hope for and all you can do."