NEW ORLEANS -- The reporter had barely started asking his question Tuesday when Notre Dame coach Charlie Weis interrupted him. Weis didn't need to hear anymore -- it was the same criticism he had been hearing about his team for a month as the No. 11 Fighting Irish prepared to play No. 4 LSU in Wednesday night's Allstate Sugar Bowl at the Louisiana Superdome. 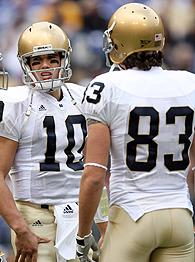 "What is it going to take for Notre Dame to be competitive in this game and stay in this game right until the end?" the reporter asked.

OK, Coach Weis, how is Notre Dame going to beat LSU, which has more size, speed and strength -- at least in the eyes of the rest of the college football world?

"You have to know we're coming down here to win this game," Weis said. "We know we're going into the game against a formidable opponent that was one of the best teams not only in the Southeastern Conference, but one of the best teams in the country. I think our team really needs to win this game. Not want to win the game, but needs to win the game. We came down here to win a football game."

Notre Dame, perhaps more than any other team in college football's postseason, needs to win a bowl game. The Fighting Irish haven't won a bowl game since a 24-21 victory over Texas A&M in the 1994 Cotton Bowl. The Irish have lost eight bowl games in a row since then, tying a dubious NCAA record set by South Carolina from 1945 to 1988 and West Virginia from 1987 to 1998.

"We have a whole bunch of guys that are walking out the door here, their careers are ended, and I think it would be a really good thing for them to walk out of here with a bowl win, especially against a team like LSU on the road," Weis said. "I think it would be a very positive memory for them. Every time I go into a game, we go in with the expectations of winning the game. But to be honest with you, I'd like to win the game not for me, not for the whole university. I'd like to win it for those guys walking out the door."

Among those Notre Dame players walking out the door after the Sugar Bowl are record-setting quarterback Brady Quinn, receiver Jeff Samardzija and most of the core of players who helped the Irish rebound from 5-7 and 6-6 records in former coach Tyrone Willingham's last two seasons. The Fighting Irish are 19-5 the last two seasons combined and are playing in their second consecutive BCS bowl game.

Yet, after the Fighting Irish were shellacked by Ohio State 34-20 in the 2006 Fiesta Bowl, and following unsightly losses to Michigan and Southern California this season, some college football fans wonder whether they deserve to be playing in a BCS bowl at all.

"I get tired of hearing how bad we are," Quinn said. "I mean, that's all people seem to be saying sometimes. Notre Dame is one of those universities where it's kind of like either you love it or you hate it. It's tough because you've got to deal with the criticism all the time."

The Fighting Irish can silence many of their critics by upsetting LSU, which won its last six games, including victories at then-No. 8 Tennessee and then-No. 5 Arkansas. The Tigers also figure to play in front of a pro-LSU crowd in New Orleans, as the LSU campus in Baton Rouge is only about 80 miles away. 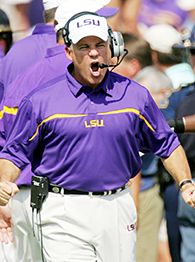 "The respect for an opponent doesn't come from what an analyst says," Miles said. "The respect for an opponent comes from watching film and seeing how they make play after play after play, winning 10 games and beating up Penn State. That gets you fired up as a competitor.  I don't think there's any way our team is going to be complacent in any way. This is a very capable Notre Dame team with skill at every position."

Still, the Tigers expect to have an advantage on the defensive line, where All-America tackle Glenn Dorsey will go against a Notre Dame offensive line that allowed 30 sacks this season. Quinn threw three interceptions and was sacked 11 times in Notre Dame's last three losses, against Ohio State, Michigan and USC.

LSU also will try to exploit Notre Dame's defense, which surrendered an average of 450 yards in the aforementioned losses, including a school-record 617 yards to Ohio State. The Buckeyes, Wolverines and Trojans combined for six touchdowns of 40 yards or longer.

But LSU offensive coordinator Jimbo Fisher isn't buying the argument that the Irish are too slow and too small on defense.

"I've never seen a team that's slow and small get to the Sugar Bowl," Fisher said.

The Irish will at least have to be faster out of the gates. In their last three losses, they trailed at halftime by a combined score of 75-31. LSU has outscored its 12 opponents 122-20 in the first quarter.

Weis is so concerned about Notre Dame's slow starts in those games that he changed the way the Irish practiced leading up to the bowl game. He said he demanded less from his players the last four weeks, something he had never done in his coaching career.

"I can promise you one thing: I don't know how we'll play, but we're not going to be tight at the start of the game," Weis said.

And Weis expects his players to have a chip on their shoulders, as they try to prove themselves in the postseason one more time.

"Our [bulletin] board is full," Weis said. "But the bottom line, when it's all said and done, who cares what anyone else thinks? Because the bottom line is when you go out there and kick it off, you're going to be smacking each other in the mouth. That motivation stuff doesn't last very long. It's really how you play."