NEW ORLEANS -- Even after Notre Dame lost its ninth consecutive bowl game Wednesday night -- yet another one in ugly fashion with a 41-14 loss to No. 4 LSU in the Allstate Sugar Bowl -- there is hope for Fighting Irish fans. 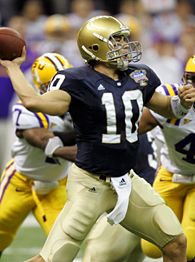 Even without record-setting quarterback Brady Quinn, receiver Jeff Samardzija and many more of its best players next season, Notre Dame will finally end its postseason drought, now the longest in NCAA history.

The Fighting Irish will end the postseason losing streak that dates back to 1994 because next season they'll be playing in some second-tier bowl game in a nondescript place like Shreveport, La., which is where they should have been playing during much of the last two decades.

Against LSU, Notre Dame once again proved it doesn't deserve to play in BCS bowl games, which have become its birthright because of the school's national stature and ability to draw high TV ratings.

And by shutting out the Fighting Irish in the second half and erupting for 577 yards of offense in the game, the Tigers again proved Notre Dame is no longer capable of beating teams like LSU. Or Ohio State, Michigan and Southern California, which also handed the Fighting Irish lopsided losses in the past 12 months.

Notre Dame opened the season ranked No. 2 in the preseason Associated Press Top 25 poll, but never lived up to its lofty billing in its biggest games. The No. 11 Fighting Irish lost two in a row to finish the season, and were embarrassed in a bowl game for the second straight year. Ohio State beat the Irish 34-20 in the 2006 Fiesta Bowl.

Heading into an uncertain offseason, in which Notre Dame coach Charlie Weis must replace Quinn and the heart of his football team, the coach is again left searching for answers to the question of how to rebuild the once-proud football program at his alma mater. 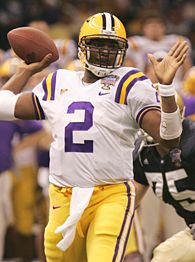 "I think the first thing that's got to happen is that everyone is thinking the same way I'm thinking," Weis said. "They can't be content to be 10-3 and going to a bowl game and getting your clocks cleaned. That's my responsibility. It would be really easy for me to sit here and blame the players, but I would be at fault.

Russell completed 21 of 34 passes and threw a 58-yard touchdown to Brandon LaFell. He also had completions of 31 and 58 yards to set up touchdowns, as LSU's receivers had little trouble running away from Notre Dame's defensive backs.

"Obviously, we were giving them too much space to throw the ball," Irish safety Tom Zbikowski said. "Their receivers were too open and we weren't being physical enough with his receivers. He was just able to drop back and throw off timing and he'd hit his receivers."

Russell, a junior who might skip his senior season and enter the NFL draft, outperformed Quinn, who completed only 15 of 35 passes for a season-low 148 yards with two touchdowns and two interceptions.

"It would be nice to sit here and say he laid an egg, but that's hardly the case."

Weis hoped Quinn's performance wouldn't hurt his chances of being the No. 1 pick by the Oakland Raiders in April's NFL draft. 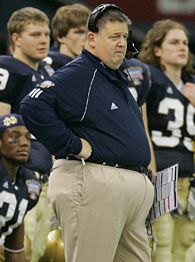 "It hasn't hurt his future," Weis said. "I think they know this kid is good."

The loss was especially frustrating for Weis. He was so concerned about his team's slow starts in the losses to Ohio State, Michigan and USC that he changed the ways the Irish practiced in the month leading up to the Sugar Bowl. Weis demanded less from his players, something he had never before done in his career.

Weis didn't say Notre Dame would play so foolishly early on. On the game's opening possession, Samardzija caught a 12-yard pass for a first down, but then wiped out that gain with an unsportsmanlike conduct penalty for flipping the football at the cornerback he had just beaten.

Later in the drive, the Irish faced fourth-and-3 at their 34. Weis called a fake punt, and linebacker Travis Thomas took a direct snap and tried to run up the middle. He was stopped for no gain, and the Tigers took over at the Irish 34. On LSU's first play, Russell threw down the right sideline to junior Early Doucet , who beat cornerback Mike Richardson for a 31-yard gain to the 3. Freshman Keiland Williams scored on the next play for a 7-0 lead.

The Fighting Irish punted on their next drive after picking up one first down. LSU took over at its 20, and Russell threw a screen pass to Doucet on the first play. The Irish again hurt themselves with a self-inflicted wound, after safety Chinedum Ndukwe hit Doucet very late and was penalized 15 yards for a personal foul. The Tigers marched down the field from there, with Russell throwing an 11-yard touchdown to Dwayne Bowe for a 14-0 lead with 6:03 to go in the first.

Notre Dame came back and tied the score at 14 after Quinn threw touchdowns to David Grimes and Samardzija. But things fell apart in the second half.

"I felt in the locker room at halftime that things were calm and under control," Weis said. "I saw no signs that we would play a completely crummy second half. It was a completely crummy second half. The defense gave up points, the offense was going four-and-out and three-and-out, and the defense got worn out. I'm really disappointed in how the game turned out. I've got to do a better job."

And so do the rest of the Irish.

"We came here the first year and made some good strides," Weis said. "But I don't think we made enough strides for me to be content. We need to make some more steps if you want to play for it all."

Or at least play in Shreveport.