In 1961, the year Alabama won the first of Bear Bryant's national championships, I was a redshirt sophomore on a good Georgia Tech team that included eight or 10 future NFL players. 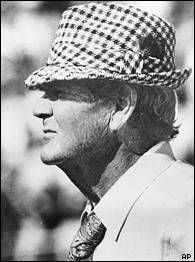 We were coming off a painful loss to the Crimson Tide the previous year and wanted to prove we could whip them in their own backyard. We thought we could spoil their ranking and take their place as the dominant team in the Southeastern Conference, where Tech played until 1963.

We were coached by our own living legend, "The Gray Fox", Bobby Dodd. He and Coach Bryant were longtime friends, and the Alabama coach was fond of saying, "When I look across the field on game day I would rather see anybody other than that damn Dodd. He can beat you with his brain."

Coach Dodd was a General Bob Neyland disciple and understood the wisdom of ball security, field position, and error-free football better than anyone else in his era. He also made public reference to the fact that he wanted his boys to have fun playing football and refused to allow us to scrimmage during the season. Rival coaches found this appalling and said so. In that era football was supposed to be a daily gutcheck, not fun.

Game day was bleak, cold and overcast, one of those November moments in Birmingham that feels like the Midwest. The wind whipped around Legion Field, throwing up bits of dust and paper from the sparse grass. From my vantage point on the sideline my clean jersey was a stark contrast to those of the guys actually playing. It was a brutal game, the kind in which everybody is filthy by the second quarter. It was no place for the faint of heart.

Years later players from both teams would tell me about broken jaws and body punches, smiling and shaking their heads at the recollection of the violence on that field.

Late in the game an Alabama player ripped an elbow into the face of one of our players with such force that he dropped like a lead pellet. His cheekbone was shattered and several teeth snapped off. A pall fell over our bench as we concluded the game, losing 10-0.

The media frenzy that followed would be considered normal by today's standards but for that era it was unbelievable. Frame-by-frame photos of the incident were run in the Atlanta papers, along with demands that Coach Bryant drop the offending player from his team. Coach Dodd was openly hostile about the incident, characteristically defending our player.

The Alabama player drove to Atlanta, visited our teammate in the hospital, and apologized. His apology was accepted. The press virtually ignored the reconciliation and continued to push for dismissal. Not surprisingly, Coach Bryant stated that he would do his own discipline and that no one from the Atlanta papers was going to decide the fate of any Alabama football player, no matter the circumstances.

Sadly, Dodd and Bryant, warriors in every sense, stopped talking, and the series was discontinued after 1964. Unbeknownst to me, Tech and Alabama people digested the furor and hardened toward one another, seething over the various injustices to both players. With very little fanfare a grudge the size of Stone Mountain was stuck in the craw of the vast majority of both fan bases. I was oblivious, off on my 10-year NFL adventure.

The grudge factor
Plant a grudge in the fertile soil of ideology, religion or politics, and the body count begins to mount sooner or later. Deposit one in sports and the murders are usually figurative, though the fervor and fanaticism are real. The passage of time has been thought to settle such feuds, but the more we learn about them the more we find that time is simply the medium for hibernation, that grudges lurk just under the surface, waiting to be awakened at a moment's notice.

By 1975 I was through playing and on the road as a scout for the Green Bay Packers. On a trip to Tuscaloosa I was watching practice, taking notes on the prospects, and was startled by a growl from on high. It was Coach Bryant, speaking through his bullhorn.

"Hey, Bill, why don't you come on up here where you can see something?" he commanded.

I scrambled up the circular steps until I stood next to the great man. There was an awkward silence while he seemed to be sizing me up. We only knew each other from an all-star game in which I had played for him 10 years before. I began to ask him about his players as NFL prospects. He was not very helpful and seemed distracted, almost distant. We made small talk about Steve Sloan, one of his favorite former players.

I said that I had and he responded, "It's better than the Bible." I nodded and looked away, not quite prepared to put my buddy's literary gifts in that class just yet. There was another long quiet spell.

Finally he blurted out what he had been wanting to broach. "You ever see Dodd?"

"Yes sir, I do talk with him every now and then," I answered.

"Me and Dodd are too old to be feuding," he responded.

"Yes sir, I believe you are right about that," I said, breathless now in my excitement.

He thought some more, then spoke forcefully. "I tell you what you do Bill. You go home and call Dodd. Tell him what I said, and tell him one more thing for me."

He looked me hard in the eye, and said, "You tell him I will personally sponsor Georgia Tech to come back into the Southeastern Conference."

I hurried home, called Coach Dodd and delivered Coach Bryant's message. Dodd did not hesitate, saying "Paul's right, we need to stop our fussing, but we will never get back into the SEC. The Mississippi schools would simply not allow it. I tell you what, I'll call Bryant. He and I should get back together."

The next thing I knew the two schools were playing each other again. Indeed, my first game as head coach at Tech was against Alabama in Birmingham in September of 1980. I felt as if I were some kind of peace negotiator, having been in the middle of something special.

When I was offered the head coaching job at Alabama in 1987 I foolishly assumed that all was forgiven between the two schools and that the transition would be a smooth one.

Both fan bases erupted and I became the polar opposite of that which I had imagined. I was the lightning rod that reignited all the passions from all those years before. Not only did Alabama people resent my hiring, my Georgia Tech people were outraged, perhaps even more than the Alabama faithful if that were possible.

It was no one's fault. We simply did not understand the grudge factor. So when you watch Tennessee and Alabama play this weekend, understand that the current controversy is more than football, more than lawsuits and more than personal animosity.

When Ohio State and Michigan, Georgia Tech and Georgia, Alabama and Auburn, Florida State and Miami or Texas and Oklahoma meet on the field the teams are simply acting out long-held notions about real and imagined injustices between the institutions.

Would the athletic world be wonderful if all the grudges could be settled on the gridiron? I suppose, but then the long-held grudge was an American tradition long before we invented this crazy sport!