A familiar name for sports fans jumps out of the headlines as we continue to reel from the horror of Hurricane Katrina. In February, 1996 national champion and Heisman Trophy winner Danny Wuerffel announced his retirement from the NFL. He had taken a position as development director with Desire Street Ministries in New Orleans.

The ministry is a faith-based organization that seeks to transform the Desire neighborhood into a healthy place to live. When the organization was formed in 1990, the neighborhood was the murder capitol of the U.S., and had been rated the worst in the country by the U.S. Department of Housing and Urban Development.

"Wuerffel puts own losses aside. Danny Wuerffel knows he is basically homeless."
-- Gainesville.com

When I called Danny to console him he said, "We have lost our house and all our stuff. My family and I have re-learned the difference between wants and needs. We are safe, we have each other, and food and shelter. My wife Jessica and son Jonah are fine. We don't need anything else. What this does is to give us the opportunity to do more good than ever. We will do that."

At some point I realized he was consoling me  have you ever noticed how deeply spiritual people do that, especially when they are the ones who seem to be in trouble?

The first time I saw Danny Wuerffel was Sept. 11, 1993. Freshman quarterbacks are not supposed to thrive in high-pressure situations, but Wuerffel crushed our Kentucky hopes with a precision touchdown pass in the closing seconds that night to win for Florida, 24-20. It was as shocking a defeat as I have ever endured, but we could not help but admire this kid who seemed immune to the forces of nature. It was a portent of things to come.

I do not remember whether Danny clasped his hands and looked to the heavens after his triumph in Lexington, but we all saw him do it innumerable times over the next four years as he forged a career of unprecedented success. It culminated with a national championship for Florida, a Heisman Trophy and first-team Academic All-American honors for Wuerffel. He was a Steve Spurrier quarterback with something extra. As Spurrier said in a recent interview, it seems that hardly anything rattles this guy.

Somebody once asked Bear Bryant to define the term "class." It is said that his answer was he could not define it but he could dang sure recognize it. I'm not real sure how to define "humility," but I guarantee I can spot it when I see and feel it. It comes from the word "humus," or ground, implying that it has to do with one being grounded as a human being. It is that quality that separates the great, unselfish spirits from the rest of us. Danny Wuerffel has it -- and at this moment lives it in such a manner that lives, mine included, are being impacted in a powerful way.

Think about it. He could have had all the glitter and gold our society worships with such fervor. With his Spurrier training and football pedigree, he could have easily become a successful coach or television broadcaster. He could have hit the speaking circuit at thousands of dollars per appearance. His agent, Mike Moye, says Wuerffel has walked away from literally millions of dollars, fame, and the spotlight because he wants so deeply to share his faith with the least fortunate in our country.

According to Moye, when the two talked about all the fun Wuerffel could have and the riches he could reap, Danny said, "All of these opportunities sound great to me. I would like to try every one of them if I had more than one life. But since I just have this one life, I will dedicate it to The Desire Street Mission." When I hesitated, Moye, a longtime friend, said emphatically, "You can quote me on that." 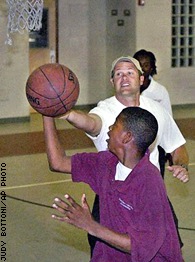 As surely as this great player hoisted the national championship trophy overhead and held the Heisman Trophy close to his heart for the cameras at the Downtown Athletic Club, he now extends our society's neediest children for us to behold, and to nurture with him. It is a riveting picture, one that will linger until people of good will find a way to help.

When the kid quarterback won big games and a national championship for his team, he was having fun. The luster of that and other victories will fade. What Wuerffel is doing these days is not fun as he seeks his Desire Street children, who are scattered about the country in evacuee centers. But his passion will generate joy as one life after another is reclaimed from the storm and the streets. That will never fade. Wuerffel is living out his faith in such a way as to have an eternal impact.

When I asked what he wants people to know about his work, he said, "Most of the time people just don't think about the issues of poverty in the inner city. The catastrophe has focused America on how it really is. It has exposed the ongoing issues." It was a challenge delivered in the gentlest of terms.

Wuerffel's final word on the crime, blame game and political posturing surrounding the tragedy is worth noting. He says, "While tragedy can bring out the worst in human beings, it also brings out the best."

We will all be a little better, Danny, because you passed our way.