Churchill's famous address is the perfect response to totalitarianism, which is clearly real adversity. It is also the underlying principle to teach young men who are having a brutal football season, which is the contrived adversity of our sports-obsessed culture. Brief, direct, repetitive and penetrating, it reminds anxious young minds that there are only two possibilities when one is knocked down.

There are two pains in life: the pain of discipline and the pain of regret. You choose. Lie in the muck, wallow and feel sorry for yourself, or get up, suck it up and carry on as if no one can beat you. You choose.

Each time you face that choice, you shape your own destiny ever so slightly. If you are on a football team, you shape the destiny of your teammates, as well. Each time you decide to hang your head and turn down the tough block, it becomes a little more likely that you will take the easy way out the next time. Each time you act with courage and opt for the next right thing, you increase the odds you will choose well the next time you are knocked on your butt.

In time, you become the product of your accumulated responses. If you are courageous and answer each gut check with a grimace and a smashing tackle, you become a success long before you win games. So it is with a courageous 0-3 football team. There are 0-3 squads right now that will not lose again this season. There are 0-3 squads that will lose another year or two, and then blossom into "sudden successes." There are 0-3 coaches being skewered by the press, the bloggers and the gutless wonders on the call-in shows, who will be Coach of the Year before long. They are the ones who can stay positive, rely on their innate toughness, keep their kids from wallowing and abide by a few simple principles.

Leadership
I know a few who have such leadership potential. I have been in the trenches with Duke's Ted Roof, the finest leader I ever coached. He will never give in. Sylvester Croom's family essentially adopted me when I was the coach at Alabama. Although I have not been on a staff with the Mississippi State coach, I know what he is made of. He will never give in. Terry Hoeppner's Indiana team is struggling on the field while its valiant coach shows us what real courage is. He will never give in.

Americans are suckers for Horatio Alger stories, so we will lionize Roof, Croom and Hoeppner when they achieve the "success" we crave. The simple fact is they are already successful because of what lives in their hearts. They are successful because their players will be better husbands, fathers and leaders for having performed under them. 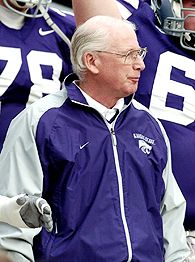 It appears those three also possess the other essential ingredients necessary to continue. In today's quick-fix culture, there must be athletic directors and presidents who match their coaches' courage.

Our obsession with winning and money presents another daunting challenge this time of year. Jim Tressel has to coach a bunch of guys at Ohio State who are being asked daily who they would like to play in the championship game in January! "Experts" on the West Coast are making Pete Carroll's job more difficult by touting this version of the Trojans as the "greatest of all time" after three games! For those of us who have had teens living under our roofs, we understand just how susceptible they can be to intimations of hopelessness or greatness.

What would you do with roughly one hundred teenaged males under one or the other set of circumstances? The enemies of accomplishment are self-pity and complacency. Our teens are so accustomed to the irrational behavior of their parents and other fans that their vulnerability to such is greater than previous generations. Coaches who deal with irrational criticism, premature firings and constant questioning of their authority have tougher jobs than in any previous generation.

As I racked my brain to remember someone who could address this moment with authority, I had a flashback to a speech at last year's convention of the American Football Coaches Association. Former Kansas State coach Bill Snyder knows exactly how to handle both sets of circumstances. He did so against all the odds, sustained excellence and now calmly reflects upon it in the simplest terms. His address was not like any I have ever heard from a coach. There was no flash, dash or touting of his systems. There was no ego trip about how long and hard he trained. There was simply a careful explanation of how one of the greatest college football achievements of all time was accomplished.

For the uninitiated, Manhattan, Kansas, was considered the end of the earth in football terms prior to Snyder's arrival. Coaches snickered about the "impossible" job. After Kansas State's transformation under Snyder, which is a matter of record, people like Barry Switzer were calling him "The Coach of the Century." Only people who have built programs understand just how remarkable his accomplishments were. He is the only coach I know who has a major highway named for him. Through it all, he remains the same guy, calm, unaffected and true to himself.

There are 12 principles. Here they are, unembellished. Some are obvious, and some will surprise you. They are self-explanatory, so I will present them as he did:

1. I promise we will get better every day.
2. Be where you are.
3. We must have the total commitment from the president of our university.
4. This is the most complicated time in history for our young people. There is an epidemic of teen suicide in our country. For teens, the single most prescribed medication is for depression.
5. Bring better people and better students into the program every day. Find a way.
6. Involve as many people as possible.
7. Build a wonderful relationship with the faculty. Our goals are the same as faculty goals.
8. Perseverance is a must.
9. Expectations are established by the leader. I will set the example.
10. Tamp down limitations. Find ways to eliminate each one.
11. Have the players understand they will not be judged by the scoreboard. We will assess progress.
12. I will make the decision most beneficial to our program  every time.

Having been around great coaches all my life, I have learned why they are so generous with their thoughts and ideas. They don't care if you know what they are doing, because they know you will not take the time or effort to do what they do. Snyder's plan will work in any environment, given time, courage and Churchill's brand of perseverance.

For those of us who dare call ourselves leaders, whether we are figuratively 0-3 or 3-0, we would do well to take notice.