Every week we scan the Web sites, papers and rumor mills for the next sensational suspension story. This week's tame version refers to Virginia Tech dropping defensive end Chris Ellis and split end Josh Morgan for the Georgia Tech game. The normal "team rules violation" is the only explanation. Hokies fans will gag, vent and throw up their hands at the awful behavior of this generation. Then the obsessive concern about performance will give the bloggers plenty of fodder. The same will be true of any teams with suspensions or injuries during the week. 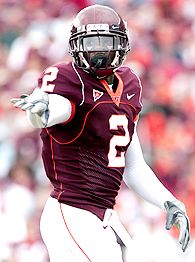 Consternation will reign as the purveyors of sports wisdom once again review every player transgression during coach Frank Beamer's tenure.

The assumption is that performance will be negatively affected. The truth is almost always just the opposite.

Only rarely does the team miss the suspended players so much that it loses. Even if they don't win, performance is better than if there had been no disciplinary action. There is an uncanny correlation between discipline and heightened team synergy. In my experience, there is usually a burst of energy and execution from the shorthanded team as the players beat the odds and confound the prophets of doom.

The exception is when the suspensions approach the epidemic level, and there is hardly a scholarship athlete to put on a jersey on one side of the ball or the other.

I have my "printer friendly" version of an interview with Rice's offensive coordinator, Major Applewhite (That looks funny doesn't it? One of the most popular Longhorns quarterbacks ever, with those wings on his players' heads?). It was published prior to the Rice-Texas game, and says right here, "Applewhite knows he has a big job ahead this weekend." Indeed  Texas won by a bunch, 52-7, and it could have been a hundred. It continues, "He recalls the last time Rice beat Texas, in 1994. He was a sophomore at Catholic High School in Baton Rouge, La. Applewhite didn't watch it. But he sure heard about it. 'Seven Texas players were suspended and all the stars lined up for Rice,' he said."

What I am saying is that a Rice might beat a Texas if the guts of the Longhorns' defense are taken away for a game, but most often the team that is wounded by the suspension of key players finds a new group identity and plays inspired football.

Synergy
The team that suspends together stays together. The principle could be called Synergy Jumpstart. Believe it or not, today's generation of young people has a deep yearning for discipline. Team leaders privately will state that the apprehension of the guilty parties relieves tension. The team always knows who the selfish rule-breakers are before the coaching staff. When the guilty are caught and punished, there is the sense that the system works, and a blend of team leadership and trust creates cohesiveness.

College football teams today are a strange brew of widely divergent personalities, special interests, racial, religious, ethnic and political identities. I have seen violent disputes over the kind of music played in the weight room. Teens are bombarded by educational, legal, media, cultural, gambling and agent forces. They get mixed signals from parents, who talk a great deal about education in the recruiting process, then become anxious about NFL draft status.

The youngsters work unconscionable hours, often rising before dawn to lift weights before breakfast. Then come classes, tutoring, lunch, football meetings, getting taped, putting on 14 pounds of equipment, practicing, conditioning, media interviews, showers, training room treatments, dressing, dinner, more tutoring, study and, finally, fitful sleep prior to starting the process again the next morning. The weekends bring grueling games under the most intense scrutiny in history. Roughly every other week there are long, hard trips on planes, buses and an occasional train.

All the while they are reminded of the "free" education they are receiving, how they have "got it made," and how they had better be "loyal" to good, ol' alma mater when draft time comes around.

The great ones bear an additional burden. One of the best players I ever coached was Moe Williams at the University of Kentucky. Moe was a star the day he set foot on campus. His attitude was exemplary. He practiced like a seasoned veteran. He played like the high draft choice he was to become. He handled the media with grace and aplomb. He smiled all the time. On the first day of class, I asked how it had been to begin his college educational career. He said, "Coach, this place is so big I never found my classroom." We had let him down. Halfway through his freshman season, as he was ripping through good SEC defenses, I asked how it was going. He stopped smiling, looked at the ground, looked back into my eyes and said, "Coach, I have never been so tired in my life. I'm going to keep going, but all I really want is to lie down."

We had let him down again  worse this time.

"Is this generation of student athletes more likely to cause trouble than in years past? Probably, but not by much. "

Once a player is marked as a potential draftee, the family's conduct can be literally unbelievable. If I related some of the scenes I have witnessed in which players are burdened with family money expectations long before they make a dime, you would accuse me of lying. Suffice it to say that a 20-year-old labors mightily under the notion that he is somehow responsible to bail out his parents, uncles, cousins and siblings. All of this takes place in the midst of a national epidemic of teenage suicide. I am always horrified, but never surprised when I read that another of our emotionally spent student-athletes has attempted to take his or her life.

Is this generation of student athletes more likely to cause trouble than in years past? Probably, but not by much. Remember, a large portion of this generation has been raised primarily by single mothers and grandmothers. Under the circumstances, the ladies do an incredible job. But most often there is no father present. Value systems are formed independent of the family unit that has been the bulwark of our society. That has never been the case in previous generations.

We had our share of rounders 40 years ago, when most everyone had a mom and dad. I was the designated driver assigned to collect money in the dorm at 3 a.m., to bail out a couple of our superstars from the city jail. It happened more than once. It was never written about in those days. Some of our legendary coaches would not survive two weeks in today's media-driven culture if their personal lives were revealed. Do not misunderstand me. I do not seek to defend any negative behavior, but we must keep today's kids in context if we want to understand the big picture.

Often the player comes to enjoy and trust his teammates more than anyone else. I'm guessing my alma mater, Georgia Tech, is in more trouble with Virginia Tech now than if the aforementioned suspensions had not occurred. The last thing the Yellow Jackets need is for the Hokies to get an energy boost this week.

There is a legitimate debate over whether team sports build character. I believe they do when properly coached and administered. But two indisputable facts are that football produces adversity in many ways, and whether that builds anything, it always reveals character.